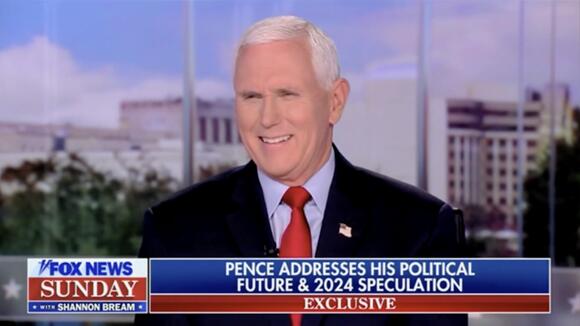 Pence appeared Sunday for an interview with Shannon Bream of Fox News Sunday when she asked him about a Trump-Pence ticket, to which he responded by bursting into laughter. The former vice president has released a book on his term with Trump in which he expresses his disapproval of how the president handled the 2020 election. During his media tours promoting the book, Pence has refused to commit to endorsing Trump for president in 2024.

"Anything can happen in politics," Bream responded to Pence's laughter.

"Almost anything can happen," Pence clarified, "but I will tell you, we’ll sort out what our role, our calling is, but you know me well enough to know we’re going to pray all the way through it and we'll go where we’re called."

Bream also discussed Pence's book at length during the interview, implying that it seemed like the first step of a presidential campaign of his own. She asked the former vice president when he will make a decision about whether to run against his old boss.

"Ronald Reagan said one time the American people have a funny way of letting you know if they want you to run for president," Pence said. "I've been traveling this country over the last two years; we’ve gotten a lot of encouragement from people. I truly do believe that the American people want to get back to the policies of the Trump-Pence administration: less taxes, less regulation, more American energy, secure borders, a strong military, standing tall in the world, standing with allies, standing up to enemies. They want to have judges who will defend our liberties at a time when many liberties are under assault every day."

Pence hinted that his decision could be made as soon as after the holidays as he takes time to deliberate with his wife and three children. It will be their first holiday in three years together due to his son and son-in-law's military service.

A November Zogby poll of Republican voters showed support for Pence for president at 8.2%, compared to Trump at 46.8%. When respondents were asked who they'd vote for should Trump not be in the running, 21% chose Pence, but over 48% chose Florida Gov. Ron DeSantis (R).

Pence knew what Trump's true beliefs and policies were and he's asking us to trust him!?!? "Hit the road Pence and don't you come back no more!!"

Mike pence has always been a wet noodle placeholder. A guy who can talk a good talk but always just says what he thinks you want to hear. no thanks!

“Hey Mike, sorry I tried to get you executed that one time, I didn’t really mean it. Wanna come back? Promise I won’t say anything crazy again!” Regards… Donald

Former President Donald Trump is holding two campaign events Saturday. After stopping in the battleground state of New Hampshire in the morning, the president traveled to South Carolina later in the day — knocking off two early presidential primary states in one go.
SOUTH CAROLINA STATE・10 HOURS AGO
WashingtonExaminer

Former House Speaker Nancy Pelosi (D-CA) responded to the release of police body camera footage of the attack on her husband Paul Pelosi by saying she has no plans to view it.
SAN FRANCISCO, CA・1 DAY AGO
Newsweek

Paul Pelosi attacker David DePape makes chilling call to TV station: 'I'm so sorry I didn't get more of them'

Paul Pelosi attacker David DePape said he was 'sorry I didn't get more of them' in a chilling phone call to a local California TV news station Friday after video of the attack was released.
SAN FRANCISCO, CA・17 HOURS AGO
The Independent

Rollan Roberts II’s longshot bid the White House got off to an inauspicious start when his wife collapsed on to the floor in the middle of his kickoff speech. Ms Roberts, who is pregnant with the couple’s first child, was standing by as Mr Roberts detailed why Americans might consider him for the presidency in 2024, until she wobbled slightly and fell to the ground. Rollan Roberts II announces he is running for president this week, when his five-months pregnant wife passes out. She was fine, and Roberts was obviously highly concerned. Hell of a start to Rollan Roberts 2024!...
WEST VIRGINIA STATE・2 DAYS AGO
WashingtonExaminer

Special counsel John Durham leaned on Russian intelligence memos to access emails from an aide to George Soros, according to a report.
WASHINGTON STATE・1 DAY AGO
WashingtonExaminer

Democrats have to take partial responsibility for the controversial election of Rep. George Santos (R-NY) as he played into their tradition of “identity politics,” according to political commentator Bill Maher.
WASHINGTON, DC・7 DAYS AGO
WashingtonExaminer

Jay Leno suffers major fractures after being 'clotheslined' on motorcycle

Late-night television icon Jay Leno suffered major fractures earlier this month after he was "clotheslined" by a wire while riding his vintage motorcycle.
LAS VEGAS, NV・1 DAY AGO
WashingtonExaminer

The Republican Party is reportedly looking to implement a requirement for presidential candidates to participate in debates, which was first used by Democratic Party in 2020.
WASHINGTON STATE・1 DAY AGO
WashingtonExaminer

DirecTV announced Thursday that it has filled the slot of Newsmax with conservative outlet the First.
WASHINGTON STATE・1 DAY AGO
The Independent

Rishi Sunak has said that the “hearts of the British people” are with Ukraine in a surprise intervention on the war.The prime minister also paid tribute to the ongoing bravery of ordinary Ukrainians.With just weeks to go before the first anniversary of the conflict, Mr Sunak reiterated his pledge that the UK government would stand with Ukraine “for as long as it takes”.His renewed support for the people of Ukraine came as he passed a personal message to the Ukrainian ambassador to pass onto to President Zelenskyy and the people of Ukraine at a fundraiser at the Royal Academy...
35 MINUTES AGO
WashingtonExaminer

Biden speaks with parents of Tyre Nichols ahead of video release

President Joe Biden spoke with the parents of Tyre Nichols ahead of a video release that is expected to show officers beating Nichols, who later died from his injuries.
MEMPHIS, TN・1 DAY AGO
WashingtonExaminer

The zookeeper who was severely mauled by a black bear on anxiety medications left a door open, allowing the bear to leave its enclosure, according to new findings released by the Florida Fish and Wildlife Conservation Commission.
JACKSONVILLE, FL・1 DAY AGO
WashingtonExaminer

Biden: Zients to replace Klain as White House chief of staff after State of the Union