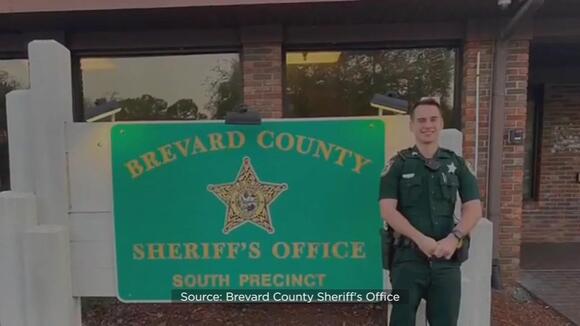 Brevard County Sheriff Wayne Ivey said the past two days have been the toughest of his career, as he lost two deputies from the BCSO family.

People who knew Walsh said he lived his dream every day.

“The interest in law enforcement, that was always there,” lifelong friend Freddy Calderon said.

Ivey said Walsh had joined the sheriff’s office when he was 18, but he had served and volunteered as a member of its Explorer program for several years prior.

“He loved the field of law enforcement and had always dreamed of becoming a sheriff’s deputy,” Ivey said.

That dream was cut short.

“Unfortunately for us though, that’s not where this tragedy ends,” Ivey said.

Ivey said Walsh and Deputy Andrew Lawson had taken a break from playing video games when Lawson pulled out his gun and jokingly pointed it at Walsh, not knowing that the gun was loaded.

Lawson pulled the trigger and the single round killed Walsh.

Calderon said he is devastated by the passing of his friend because they were the same age, with years left to accomplish more in life.

But he said he is proud to have known him as he impacted those around him.

“I’m proud of all the stuff he did,” Calderon said. “Because that inspires others, even myself, to continue achieving our goals and dreams.”

Lawson was taken into custody Sunday on a no-bond warrant for manslaughter with a firearm. He is in the Brevard County jail and Ivey said that while Lawson is distraught, he is cooperating with investigators.

An Ormond Beach firefighter and paramedic who was found unresponsive in the water while surfing, has died.
VOLUSIA COUNTY, FL・1 HOUR AGO
WFTV Channel 9 Orlando

An investigation is underway in Brevard County after a pedestrian was hit and killed on Friday, police say.
BREVARD COUNTY, FL・1 DAY AGO
WFTV Channel 9 Orlando

Florida Highway Patrol troopers said a person died after they were hit by an SUV in Osceola County.
OSCEOLA COUNTY, FL・2 DAYS AGO
WFTV Channel 9 Orlando

Man in his 20s shot near Zellwood

On May 14, 1985, a passerby found a woman injured and unconscious along Highway 91 near Newton, Georgia.
SEMINOLE COUNTY, FL・2 DAYS AGO
WFTV Channel 9 Orlando

‘If they knew what we saw’: What’s being done to reduce number of suicides among firefighters

The stress of the job and the everyday stress of what’s happening in a first responder’s personal life takes a toll. And for several Central Florida firefighters, it led to their deaths.
ORANGE COUNTY, FL・2 DAYS AGO
WFTV Channel 9 Orlando

The murders of two teens in a Palm Bay area known as “the Compound” have led city leaders and residents to ask what can be done to curb illegal activity.
PALM BAY, FL・1 DAY AGO
WFTV Channel 9 Orlando

The March for Our Lives UCF and the Future Leaders of Orlando held a vigil in Orlando in memory of Tyre Nichols.
ORLANDO, FL・17 HOURS AGO
WFTV Channel 9 Orlando

A driver has been taken to the hospital in stable condition after a crash in Seminole County, the fire department said.
SEMINOLE COUNTY, FL・17 HOURS AGO
WFTV Channel 9 Orlando

A woman living on social security said she received a letter from a roofing company demanding payment for a roof that hadn’t been built, and that she couldn’t afford.
DELTONA, FL・1 DAY AGO
WFTV Channel 9 Orlando

Federal investigators are looking into what caused a plane to crash in Volusia County.
VOLUSIA COUNTY, FL・2 DAYS AGO
WFTV Channel 9 Orlando

Local firefighter encourages community to ‘fight for air,’ one step at a time

Orange County firefighter Stephanie Nixon is raising money and inspiring others one step at a time.
ORLANDO, FL・20 HOURS AGO
WFTV Channel 9 Orlando

Three lanes of eastbound Semoran Boulevard were closed while crews worked to unload 1,000 crates of milk from the overturned trailer.
SEMINOLE COUNTY, FL・3 DAYS AGO