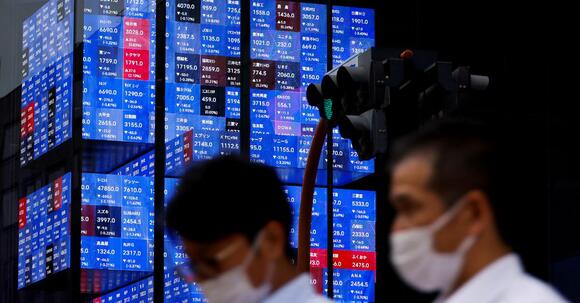 SYDNEY, Dec 5 (Reuters) - Asian shares extended their rally on Monday as investors hoped steps to unwind pandemic restrictions in China would eventually brighten the outlook for global growth and commodity demand, nudging the dollar down against the yuan.

The news helped oil prices firm as OPEC+ nations reaffirmed their output targets ahead of a European Union ban and price caps on Russian crude, which begin on Monday.

There were also reports Beijing might lower the threat classification for COVID-19, though clarity was lacking on timetables for future steps. read more

"While the easing of some restrictions does not equate to a wholesale shift away from the dynamic COVID zero strategy just yet, it is further evidence of a shifting approach and financial markets look to be firmly focussed on the longer term outlook over the near-term hit to activity as virus cases look set to continue," said Taylor Nugent, an economist at NAB.

Indeed, 10-year note yields have fallen 74 basis points since early November, effectively undoing much of the tightening of the Fed's last outsized increase in cash rates.

Markets are wagering Fed rates will top out at 5% and the European Central Bank around 2.5%.

"But U.S. and Euro area labour demand remain surprisingly strong, and alongside a recent easing in financial conditions, the risks are shifting toward higher-than-anticipated terminal rates for both the Fed and the ECB," warns Bruce Kasman, head of economic research at JPMorgan.

"The combination of labour market resilience with sticky wage inflation adds to the risk that the Fed will deliver a higher than 5% rate forecast at its upcoming meeting and that Chair Jerome Powell's press conference will shift to more open-ended guidance regarding any near-term ceiling on rates."

The Fed meets on Dec. 14 and the ECB the day after. Speaking on Sunday, French central bank chief Francois Villeroy de Galhau said he favoured a hike of half a point next week. read more

Central banks in Australia, Canada and India are all expected to raise their rates at meetings this week.

The steep decline in U.S. yields has taken a toll on the dollar, which fell 1.4% last week on a basket of currencies to its lowest since June.

The dollar also slipped under 7.0 yuan in offshore trade to hit the lowest in three months at 6.9677.

Oil prices bounced after OPEC+ agreed to stick to its oil output targets at a meeting on Sunday.

The Group of Seven and European Union states are due on Monday to impose a $60 per barrel price cap on Russian seaborne oil, though it was not yet clear what impact this would have on global supply and prices. read more

China's Foreign Ministry said the craft was a lost civilian balloon, the same explanation it gave for a suspected spy balloon that drifted over the US.
NORTH CAROLINA STATE・2 DAYS AGO
Reuters

WASHINGTON, Feb 8 (Reuters) - U.S Secretary of State Antony Blinken said on Wednesday the United States has shared information it has obtained about China's spy balloon with dozens of countries around the world.
WASHINGTON STATE・16 HOURS AGO
Reuters

Feb 6 (Reuters) - Tyson Foods Inc (TSN.N) took a "hit in the mouth" as larger-than-expected beef and pork supplies weakened demand for its chicken, executives said on Monday as the meatpacker missed Wall Street estimates for quarterly profit.
2 DAYS AGO
Reuters

LONDON, Feb 8 (Reuters) - Western sanctions on Russia have significantly reduced state oil revenues and diverted tens of billions of dollars towards shipping and refining firms, some with Russian connections.
1 DAY AGO
Business Insider

Marjorie Taylor Greene suggested the Pentagon may have withheld information about Chinese spy balloons from Trump, and called for an investigation.
GEORGIA STATE・1 DAY AGO
Reuters

THE HAGUE, Feb 7 (Reuters) - The Netherlands, Denmark and Germany are buying 100 Leopard-1A5 battle tanks for Ukraine, the Dutch government said on Tuesday. The Dutch defense ministry said in a statement the tanks would be purchased "directly from German industry".
1 DAY AGO
Daily Mail

The US is sending advanced military techs, such as advanced fighter jets and aircraft carriers, to South Korea and conducting joint training with the nation. North Korea has warned that these drills may turn the region into a militarized zone and increase tensions with other countries. It claims they are preparing for nuclear strikes in its own country.
1 DAY AGO
Reuters

WARSAW, Feb 8 (Reuters) - Western partners could deliver the first battalion of Leopard 2 battle tanks to Ukraine in the first three or four months of this year, German Defence Minister Boris Pistorius said on Wednesday on a trip to the Polish capital.
20 HOURS AGO
Reuters

NEW YORK, Feb 6 (Reuters) - FTX founder Sam Bankman-Fried has reached an agreement with U.S. prosecutors that would let him contact some current or former employees of cryptocurrency companies he once controlled, even as he accepts other restrictive bail conditions.
CALIFORNIA STATE・2 DAYS AGO
Reuters

WASHINGTON, Feb 9(Reuters) - Washington must commit more diplomatic and security resources to the Indo-Pacific to push back against China as Beijing seeks to create a regional sphere of influence and become the world's most influential power, U.S. Senate Democrats said on Thursday.
WASHINGTON STATE・1 HOUR AGO
Reuters

EXPLAINER - Why was the Turkey-Syria earthquake so bad?

LONDON, Feb 6 (Reuters) - The magnitude 7.8 earthquake that struck Turkey and Syria on Monday is likely to be one of the deadliest this decade, seismologists said, with a more than 100 km (62 miles) rupture between the Anatolian and Arabian plates.
CALIFORNIA STATE・2 DAYS AGO
Reuters

Feb 9 (Reuters) - U.S. stock index futures rose on Thursday as a slew of strong quarterly earnings lifted sentiment after worries that the Federal Reserve will keep interest rates higher for longer had fueled losses on Wall Street a day earlier.
45 MINUTES AGO
Reuters

Situation with China tense, U.S. looking at other actions after balloon shootdown -Schumer

WASHINGTON, Feb 7 (Reuters) - U.S. Senate Democratic leader Chuck Schumer said relations with China were strained and the Biden administration is looking at other actions it can take after shooting down what it called a Chinese surveillance balloon over the weekend.
WASHINGTON STATE・1 DAY AGO
Reuters

Feb 6 (Reuters) - The founder of Russia's Wagner mercenary group Yevgeny Prigozhin on Monday published a video of himself in the cockpit of a military aircraft, challenging Ukrainian President Volodymyr Zelenskiy to an aerial duel.
WASHINGTON STATE・2 DAYS AGO
Reuters