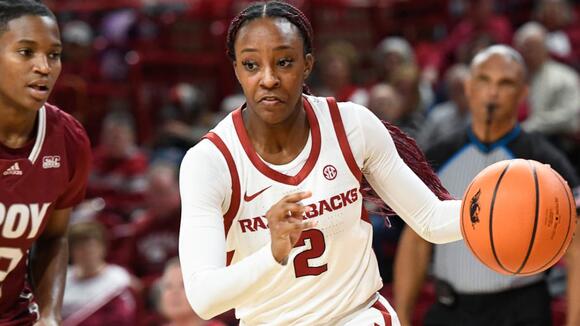 The Razorbacks outscored ORU 51-21 in the second half, after it was a four-point differential at halftime.

Samara Spencer scored a career-high 32 points on her birthday, while Saylor Poffenbarger earned her first career double-double off 14 points and 13 rebounds.

The Hogs are off to its best start since 2013 and continue to stay undefeated with five games left in the non-conference slate.

The Hogs started the game with turnovers on their first two offensive possessions, but the birthday girl, Spencer, got things going with a 3-pointer.

Oral Roberts went 0-for-10 from the field with the Hogs getting a hold of three of those shots with blocks. Erynn Barnum and Poffenbarger came up with layups prior to the media timeout, as Arkansas had the 15-8 edge with 4:21 left in the quarter.

The Razorbacks fell in a scoring drought for nearly three minutes until Spencer hit 1-of-2 free throws and followed that up with a 3-pointer to extend the lead to 10. Arkansas took the 22-16 lead through one quarter.

Barnum opened the quarter with a layup, but ORU went on a 4-2 run to cut the lead to six. A Chrissy Carr triple and Spencer driving layup put the Razorbacks up by 11 with 7:31 remaining in the quarter.

ORU was 0-for-4 from the field until the Golden Eagles converted on their next three possessions to cut the Arkansas lead to seven, 37-30, with 3:18 remaining in the half.

The Hogs were 0-for-6 from the field until Maryam Dauda delivered off a putback basket. ORU made 5-of-7 field goals down the stretch, including a 3-pointer to cut the deficit to four going into the break with the Razorbacks ahead, 41-37.

The Razorbacks commenced the second half on a 9-2 run, which was sparked by a Jersey Wolfenbarger layup off a nice drive to the basket. Arkansas led by nine, 50-41, with two minutes and some change into the third frame.

The Hogs cruised on a 7-3 run with big thanks to Spencer’s two 3-pointers, to lead 57-44 at the media timeout. Arkansas continued to roll and after Spencer’s sixth 3-pointer of the game, extending the lead to 72-47.

The Razorbacks outscored the Golden Eagles 32-10 in the quarter.

Arkansas entered the fourth quarter with a 73-47 lead.

The Razorbacks got off to 10-2 run, sparked by a Poffenbarger 3-pointer. At the media timeout, Arkansas was up 86-53 with five minutes and some change left in the game. The Razorbacks won 92-58.

• Spencer stole the show with a career-high 32 points off 10-for-17 shooting from the field and a career-high six 3-pointers. She also tallied three steals, three assists and two boards.

Carr logged 15 points with three triples along with five rebounds.

Poffenbarger earned her first career double-double with 14 points off 5-of-11 shooting from the field and 13 rebounds, five assists and one block.

In her first start of the season, Wolfenbarger finished just shy of a double-double with nine points and a career-high in both rebounds (12) and blocks (four).

Barnum tied her career-high in assists with four.

Arkansas outrebounded its opponent for the ninth game this season, 57-41.

The Razorbacks had 16 assists on 33 field goals.

The Hogs are set to host Lamar next Thursday, Dec. 8, to continue on its four-game homestand. Tipoff is set for 7 p.m. at Bud Walton Arena with coverage of the game being broadcast on SECN+.

What were the circumstances and what was the most losses Arkansas has ever carried into March Madness?
FAYETTEVILLE, AR・22 HOURS AGO
All Hogs

The Razorback guard joined 'The Buzz' Thursday in a good spirits following the A&M game and ready to talk
FAYETTEVILLE, AR・16 HOURS AGO
All Hogs

What delayed and potentially shifting college landscape could mean for Arkansas Razorbacks
FAYETTEVILLE, AR・36 MINUTES AGO
All Hogs

What can we learn from the first time this episode of Hogs' basketball aired?
FAYETTEVILLE, AR・2 DAYS AGO
All Hogs