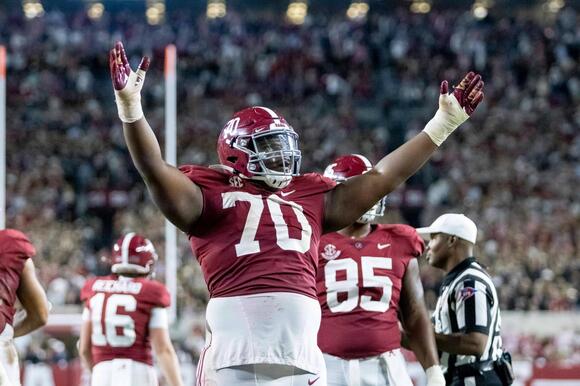 TUSCALOOSA, Ala. ( WIAT ) — University of Alabama football will be losing an offensive tackle as junior Javion Cohen announced his intentions to enter the transfer portal Sunday via Twitter .

Cohen has started at left guard for the Crimson Tide the past two seasons. In the 2021 season he started 14 games and missed one due to injury. This season, he has started 10 games and came off the bench in two.

He earned SEC All-Freshman Team honors in the 2020 season. The Phenix City native was rated as a four-star and the 25th overall offensive tackle, according to 247Sports .

TUSCALOOSA, Ala. (AP) — Alabama coach Nate Oats has agreed to a new six-year, $30 million contract amid the program’s best regular season in decades. Oats will average $5 million plus incentives over the deal running through the 2028-29 season under a deal approved Friday by the University of Alabama System Board of Trustees Compensation […]
TUSCALOOSA, AL・20 MINUTES AGO
CBS 42

National Signing Day was Wednesday, and Alabama high school athletes across central Alabama announced their homes for the next step of their lives.
HOOVER, AL・1 DAY AGO
CBS 42

With a current Southern Conference record of 9-2, Samford Men's Basketball team might be following in their own footsteps from the 2022 season.
HOMEWOOD, AL・1 HOUR AGO
CBS 42

Black family claims their land, well was stolen by Alabama officials decades ago

A family in Huntsville says 10 acres of property near UAH was stolen from them in the 1950s.
HUNTSVILLE, AL・20 HOURS AGO
CBS 42

BIRMINGHAM, Ala. (WIAT) — In December, Birmingham Southern President Daniel Coleman sounded an alarm, the school needed an infusion of $37.5 million or else the doors may be closing on the storied institution. That press conference back in December was meant be a rallying cry for help. But BSC President Daniel Coleman is finding the […]
BIRMINGHAM, AL・3 DAYS AGO
CBS 42

MOUNTAIN BROOK, Ala. (WIAT) — Within the next few weeks a restaurant that started out small, but quickly became a national success, will be returning to Crestline Village — with its original menu items and owners. Zoes Kitchen, founded by John Cassimus and named for his mother, began in 1995 as a small restaurant in […]
MOUNTAIN BROOK, AL・7 HOURS AGO
CBS 42

BIRMINGHAM, Ala. (WIAT) — 92 Alabama inmates were sent home Tuesday from prison as part of a 2021 state law. They’re part of the first group of about 400 who will be getting out under supervised release over the next month or so. But now that these inmates are out – they’re expected to figure […]
ALABAMA STATE・2 DAYS AGO
CBS 42

BIRMINGHAM, Ala. (WIAT) — Children’s of Alabama is asking for your help to show some love to its patients on Valentine’s Day. Beginning today through Feb. 14, the public is invited to send free greeting cards to patients by going online and selecting one of three card designs. Hospital staff will print the cards and […]
BIRMINGHAM, AL・1 DAY AGO
CBS 42

2 men arrested in Huntsville in connection to Birmingham homicide

BIRMINGHAM, Ala. (WIAT) — Birmingham Police Department announced two arrests made in connection to a homicide that occurred Tuesday. Tanarence Bernard Murphy, 27, and Aaron Elijah Bearden, 24, were arrested in Huntsville on warrants for capital murder (robbery). According to the BPD, Robert Chandler, 57, was found shot and killed in the 4200 Block of […]
BIRMINGHAM, AL・20 HOURS AGO
CBS 42

65 homes surrounding Protective Stadium were repaired and more are expected as a result of a partnership between the City of Birmingham and Protective Life.
BIRMINGHAM, AL・23 HOURS AGO
CBS 42

BIRMINGHAM, Ala. (WIAT) — The Birmingham City Council has approved $6 million in funding for renovations at two historic stadiums in the city. Rickwood Field will receive $2 million while Legion Field will receive $4 million for work to be done sprucing up the facilities. Birmingham City Council President Wardine Alexander said this is a […]
BIRMINGHAM, AL・1 DAY AGO
CBS 42

BIRMINGHAM, Ala. (WIAT) — When Christy Eubank moved to Birmingham from Charlotte a few years back, the pandemic lockdown kept her from getting acquainted with the Magic City as quickly as she’d have liked. But last summer, after Eubank had joined a social group and began getting out more, she finally met someone who truly […]
BIRMINGHAM, AL・1 DAY AGO
CBS 42

EUTAW, Ala. (WIAT) — The owner of Greenetrack casino has decided to close down the business Wednesday but did not provide any other details as to why he made the decision. Eutaw mayor Latasha Johnson says she is disappointed and frustrated about the news. She says the casino provides critical funds to police, the hospital and […]
EUTAW, AL・21 HOURS AGO
CBS 42

BIRMINGHAM, Ala. (WIAT) — Whether by fork or by finger, some of the nation’s best pizza pies are now up for grabs at local pizza joint Pizza Grace, according to the “Oscars” of the food world. Last week, Pizza Grace was named as a semifinalist for “Best New Restaurant” at the 2023 James Beard Awards. […]
BIRMINGHAM, AL・1 DAY AGO
CBS 42

MONTGOMERY, Ala. (WIAT) — Nearly 100 Alabama inmates are heading home from prison Tuesday as part of a 2021 state law. They’re the first group of about 400 total who will be getting out over the coming months. Inmates who didn’t have a ride home this morning were dropped off by the Alabama Department of […]
ALABAMA STATE・2 DAYS AGO
CBS 42

BIRMINGHAM, Ala. (WIAT) — On Tuesday, the Birmingham City Council voted unanimously to approve a surplus funds plan, raising money for several projects. Mayor Randall Woodfin announced a surplus budget of about $80 million from the 2022 fiscal year. Woodfin said extra money will be reinvested into area neighborhoods, employees and facilities, including a CrossPlex […]
BIRMINGHAM, AL・2 DAYS AGO