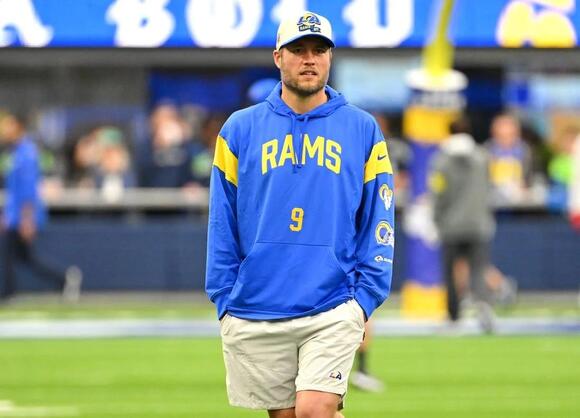 Stafford, who cleared concussion protocol earlier this week, landed on injured reserve and was ruled out for the NFC West game with the Seattle Seahawks on Sunday.

Asked Sunday night if Stafford was done for the season, McVay said there was a “good chance.”

He has missed three of the past four games.

At this point, it would make little sense for Stafford — who the Rams signed to a four-year, $160-million contract through 2026 — to return to the lineup for the final two games of this season.

Stafford suffered a neck injury in Week 11 against the New Orleans Saints after clearing protocol from a previous concussion.

John Wolford will get the start against the Seahawks on Sunday after Bryce Perkins started under center last weekend in a 26-10 loss to the Kansas City Chiefs.

When the Cincinnati Bengals take on the Kansas City Chiefs in the AFC title game on Sunday night, they’ll be doing it without three of their starting offensive linemen as La’el Collins, Alex Cappa and Jonah Williams will all be sidelined from the game with injuries. The three...
CINCINNATI, OH・1 DAY AGO
Sportsnaut

The Carolina Panthers became the first NFL team this cycle to hire a head coach, naming Frank Reich as the
CHARLOTTE, NC・2 DAYS AGO
Sportsnaut

Sean Payton will not be the next head coach of the Denver Broncos. It had been trending in this direction
DENVER, CO・2 DAYS AGO
Sportsnaut

The San Francisco 49ers will have star running back Christian McCaffrey available for Sunday’s NFC Championship Game against the Philadelphia
SAN FRANCISCO, CA・53 MINUTES AGO
Sportsnaut

Entering the offseason, Sean Payton seemed like a sure bet to be hired as an NFL head coach again. Five
NEW ORLEANS, LA・1 HOUR AGO
Denver7 News KMGH

The San Francisco 49ers and Philadelphia Eagles will open up Championship Sunday in what should be a very interesting and
PHILADELPHIA, PA・1 HOUR AGO
Sportsnaut

The Green Bay Packers would prefer to trade quarterback Aaron Rodgers this offseason and “move on,” ESPN reported Sunday. The
GREEN BAY, WI・1 HOUR AGO
TheStreet

Best sportsbook promos: $3,000+ in signup bonuses on offer for 49ers vs. Eagles & Bengals vs. Chiefs

The legal online sports betting industry has continued to grow across the United States, but the sportsbook promotions haven’t slowed. More than $3,000 in signup bonuses are available for you to claim across four different sportsbooks - and they’ll all activate in time for the NFC and AFC ...
30 MINUTES AGO
abc27 News

(WHTM) — Nick Sirianni has led the Philadelphia Eagles to new heights. The head coach set a franchise record for most wins in a regular season (14) and has his Eagles one game away from the Super Bowl. Sirianni and the Eagles will now face the San Francisco 49ers in the NFC Championship Game. But […]
PHILADELPHIA, PA・15 MINUTES AGO
Sportsnaut

One top NFL Draft expert firmly believes the Houston Texans will do everything in their power to try and move
HOUSTON, TX・1 DAY AGO
Sportsnaut Silver & Black

As we approach another NFL offseason, one of the biggest questions on everyone’s mind is where the top quarterbacks will
17 HOURS AGO
Sportsnaut

Blake Hinson scored 21 points, including the bucket that gave Pitt its first lead since midway through the first half,
ARIZONA STATE・20 HOURS AGO
Sportsnaut

As we approach Sunday’s AFC Championship Game between the Cincinnati Bengals and Kansas City Chiefs, we thought it would be
CINCINNATI, OH・2 DAYS AGO
Sportsnaut

Super Bowl records: Find out which NFL players have made history

NFL players set new records every year. Some stand for a week, while others last for decades. In this case,
20 HOURS AGO
Sportsnaut

Tom Brady open to Tampa Bay Buccaneers return: How it might look