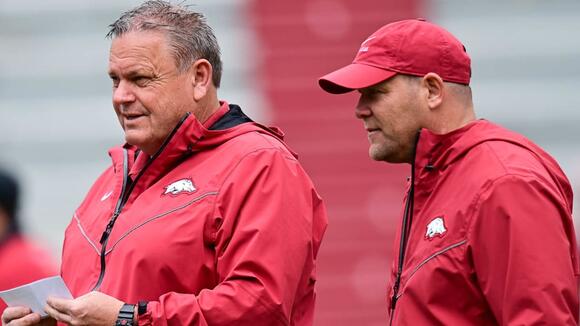 "I'm in Texas fixing to go in a home and the ol' boy sitting next to me is Barry Odom," Pittman said after a teleconference to announce the Razorbacks' formalities of facing Kansas in the AutoZone Liberty Bowl

"Go Hogs," someone that sounded a lot like Odom said in the general direction of the phone.

Odom had been rumored for the last week to be the next coach at Tulsa, who fired Phillip Montgomery a couple of weeks ago after a 5-7 season. There was some reports they couldn't close the deal over the weekend.

All of that came after he was asked if he expected his coaching staff to be intact for the bowl game against the Jayhawks on Dec. 28.

Pittman said the Hogs would have about 10 practices (he wasn't getting pinned down to a specific number) before the team leaves around Christmas for the game.

It sounded at times like he was going to spend most of the time recruiting and looking at some of the players they haven't seen this year because certainly the entire roster from the regular season won't be in Memphis.

"There's opt-outs that have been going on for years and we'll have that well," Pittman said. "We'll use these practices to get a head start on recruiting."

As for the strength and conditioning, that coach was fired right after the last game on the road at Missouri.

Look for an announcement to come this week on a replacement, who will take over that role for the bowl game.

The biggest factor he's got to overcome, though, is matching Kansas' energy level for this game.

The Jayhawks haven't exactly been a fixture in postseason. They've only gone to 12 bowl games in the entire history of the program.

They are a basketball school.

But Lance Leipold has them in a different culture since taking over a program every bit as low as what Pittman inherited in December 2019.

He turned things around in Lawrence about as quickly as Pittman did and he was certainly aware of what went on with the Hogs during their rebuilding process.

"I try not to be put ceilings and parameters on things," he said Sunday, "but I didn't know if we could making the jump from two wins to six in one season."

The game will start at 4:30 p.m. and be televised on ESPN and fuboTV .

What delayed and potentially shifting college landscape could mean for Razorbacks
FAYETTEVILLE, AR・1 DAY AGO
All Hogs