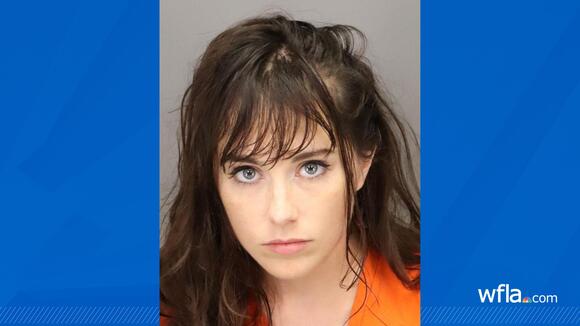 CLEARWATER, Fla. (WFLA) — A Clearwater woman was accused of driving drunk and causing a crash that killed a motorcyclist early Sunday morning.

Clearwater police said they were called to a crash at the intersection of US-19 and Gulf-to-Bay Boulevard.

Police said Hannah Ray, 28, was heading west in a Toyota Prius when she turned into the path of an oncoming motorcycle. The motorcycle slammed into the car.

The motorcyclist was identified as 32-year-old Jeffery Conner of Clearwater. He was rushed to Morton Plant Hospital, where he died from injuries sustained in the crash.

Officers said Ray showed signs of impairment after the crash and was arrested. She was booked into the Pinellas County Jail on a DUI manslaughter charge, but has since been released.

So heart breaking I passed this last night and I cried as I drove past there was almost nothing left of the bike. Prayers for Jeffrey’s family 🙏🏻🙏🏻

Why does how she looks influence any of you? She took an innocent life!! She should not have been released, and I cry for Jeffrey's family.

Yeah, she'll be looking real cute to some inmate and she will be walking around holding in inner lining of that someone's pocket pretty soon! Warm thoughts to the victim's family while they mourn their loss. 😔

Clearwater police are searching for the driver responsible for a crash that landed a man in the hospital Tuesday night.
CLEARWATER, FL・15 HOURS AGO
WFLA

A 58-year-old woman was successfully rescued from underneath a public bus after she was struck late Wednesday morning, according to authorities.
SAINT PETERSBURG, FL・9 HOURS AGO
WFLA

TAMPA, Fla. (WFLA) — Tampa police are investigating the death of a man who was killed Tuesday morning. Officers were called to a reported shooting in the 1700 block of East 24th Avenue around 10:20 a.m. There, officers found who they described as a black male in his late twenties with a gunshot wound. The […]
TAMPA, FL・1 DAY AGO
WFLA

Two Sarasota women have been arrested and are facing several charges after a fight broke out over a man.
SARASOTA, FL・1 DAY AGO
WFLA

he Tampa Police Department is investigating after a mother was found dead next to her sleeping child on Monday night.
TAMPA, FL・1 DAY AGO
WFLA

A man has died after he was struck by a car while riding an electric bicycle on Monday.
SAINT PETERSBURG, FL・1 DAY AGO
WFLA

A Lakeland man was charged with DUI manslaughter in connection to one of four deadly crashes that happened in Polk County over the weekend.
LAKELAND, FL・1 DAY AGO
WFLA

A Mississippi man was arrested late last month in connection to a murder that happened nearly 36 years ago, the Pinellas County Sheriff's Office said.
SAINT PETERSBURG, FL・44 MINUTES AGO
WFLA

Tampa police say a woman in her 20s was murdered sometime Monday evening in the New Tampa Subdivision of Easton Park in the 10700 block of Pictorial Park Drive.
TAMPA, FL・1 DAY AGO
WFLA

Questions remain about the murder of a mother who was found lying dead in a residential street in New Tampa Monday night.
TAMPA, FL・2 HOURS AGO
WFLA

An inmate died after he was found unresponsive in the Falkenburg Road Jail, the Hillsborough County Sheriff's Office said.
HILLSBOROUGH COUNTY, FL・4 HOURS AGO
WFLA

SARASOTA, Fla. (WFLA) — Friday night was a busy one for Sarasota Police Department’s Traffic Unit. They were called out to two separate hit-and-run crashes within less than 30 minutes. The crashes happened within a short stretch of Fruitville Road. The first took place near the Orange Avenue intersection downtown. Authorities said a 56-year-old man […]
SARASOTA, FL・2 DAYS AGO
WFLA

Kids dropped off near scene of Lakeland mass shooting moments before it happened, parents say

Lakeland residents are in shock and calling for an end to violence after 11 people were injured in a shooting in broad daylight Monday.
LAKELAND, FL・1 DAY AGO
WFLA

A pedestrian was hit after a driver told police that he mistakenly hit the gas pedal instead of the brake on Monday afternoon.
SAINT PETERSBURG, FL・2 DAYS AGO
WFLA

LAKELAND, Fla. (WFLA) – The Lakeland Police Department in partnership with Heartland Crime Stoppers Florida is offering a $5,000 reward for information leading to the identification and arrest of suspects involved in the shooting that injured 10 people. Lakeland Police Chief Sam Taylor held a briefing Monday evening. He said officers were called to an […]
LAKELAND, FL・1 DAY AGO
WFLA

Hernando County sheriff's deputies shot and wounded two people after one of them opened fire on officers Sunday
BROOKSVILLE, FL・2 DAYS AGO
WFLA