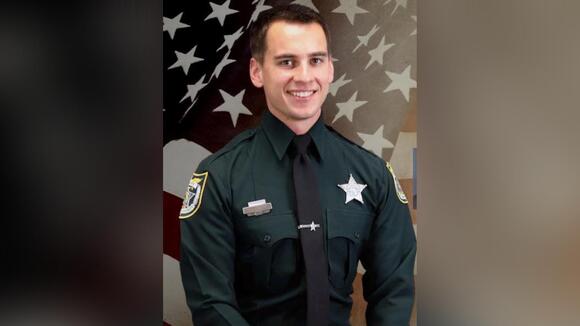 The sheriff’s office said 23-year-old Austin Walsh was shot and killed by his roommate, a fellow deputy named Andrew Lawson, in their Palm Bay home.

In an update posted to Facebook , Sheriff Wayne Ivey said Walsh and his roommate were taking a break from playing video games with friends when Lawson pointed a gun at him and pulled the trigger. The sheriff said Lawson “jokingly” aimed the gun at him and thought it was not loaded.

Lawson called 911 and reported that he accidentally shot Walsh. He is being held without bond at the Brevard County Jail and faces a manslaughter charge.

Sheriff Ivey described the incident as an “extremely dumb and avoidable accident”, going on to say that Lawson and Walsh were best friends.

The Palm Bay Police Department and Florida Department of Law Enforcement are still investigating the shooting.

NEVER ASSUME A GUN IS UNLOADED ,NEVER POINT AN GUN AT SOMEONE UNLESS YOU PLAN TO USE IT, USMC golden rule ..........

very sad but very foolish. best friends, think about that for a minute, he killed his best friend. the young are so foolish at that age, immature. I can't imagine the shock and incredible pain the young man is in. he will never be okay until he can wrap his head around this tragedy. I hope he is getting some serious mental health intervention, the sooner the better.

this is what happens when kids grow up with no respect for weapons., can't pretend they're not there we've got to address this from an early age

Man shot after allegedly charging at Florida deputy with knives

Police are investigating after a deputy shot and injured a Samsula man after he allegedly charged at them with two knives.
NEW SMYRNA BEACH, FL・21 HOURS AGO
WFLA

Florida firefighter dies after being pulled from water while surfing

A 33-year-old firefighter has died after he became unresponsive in the water while surfing Wednesday.
ORMOND BEACH, FL・1 DAY AGO
WFLA