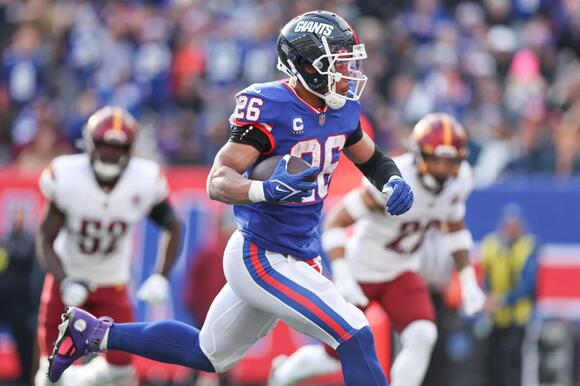 There’s plenty to be disappointed about in the (7-4-1) New York Giants 20-20 tie to the (7-5-1) Washington Commanders on Sunday at MetLife Stadium.

They missed an opportunity to create some separation in the wildcard standings between them in their division rival, as it was a game that they should have won had they not committed some costly mistakes at crucial moments.

There was Jon Feliciano’s taunting penalty midway through the fourth quarter after a first-down reception by Darius Slayton with the Giants up 20-13.

Then on New York’s next possession, following a Taylor Heinicke 28-yard touchdown pass that tied the game at 20, Slayton dropped a pass inside the Commanders’ 40-yard line with 1:45 remaining in the fourth quarter.

On top of that, there was some questionable play calling, and then there was Saquon Barkley and Richie James running into one another on 3rd-and-2 late in the game.

The Giants’ defense doesn’t go unscathed in the loss, as both of Washington’s touchdowns were the result of missed tackles, and they allowed the Commanders to rush for 165 yards on 36 carries.

Despite all of the miscues by the team, they still had a chance to win in the final seconds, but Graham Gano’s 58-yard field goal attempt fell short.

With all of that said, the tie to Washington wasn’t the end of the world, as there are reasons to be optimistic despite squandering a chance of winning their first divisional game of the season.

Here are three reasons why Big Blue should be optimistic following their tie to the Commanders.

For the first time since Week 4, New York had their best pass rusher on the field as Azeez Ojulari made his return and made an immediate impact. He had a strip sack in the first possession of the third quarter that he would recover, and he also had two quarterback hits.

His presence on the field made life easier for his teammates as the pass rush was dominant in sacking Heinicke five times on Sunday. Ojulari’s production will only increase over the final five games of the season as he gets into playing shape. Expect New York’s pass rush to be at its best during the final stretch.

Nobody wants a tie, but it’s certainly better than a loss. If the season ended today, New York would be the sixth seed and would have its first playoff berth since 2016.

The Giants are one of the elite franchises in the NFL, having won four Super Bowls in the last four decades. But the team had lost credibility over the past five seasons as they’ve had a revolving door at the head coaching position, and they’ve had five seasons in a row with double-digit losses.

With Sunday’s tie, the most losses New York can have this season is nine, which will put an end to their dubious and embarrassing streak.

Of course, head coach Brian Daboll and general manager Joe Schoen don’t care what happened prior to their arrival, but many players in the locker room had to endure this streak of ineptitude.

Ending the streak won’t be discussed amongst players and coaches, but fans can take solace in the fact that this is an indication that their team is heading in the right direction.

The Giants will once again look to get their first win in the division and enhance their chances of making the playoffs next Sunday when they face the (11-1) Philadelphia Eagles .

The Buffalo Bills are coming off a disappointing end to their season, losing 27-10 at home against the Cincinnati Bengals in the AFC Divisional round in the playoffs. Entering the offseason, the Buffalo Bills have started looking toward the future and made the tough decision to fire one of their long-tenured coaches.
16 HOURS AGO
Page Six

Dallas Cowboys quarterback Dak Prescott and Natalie Buffett have broken up after two years of dating, Page Six can exclusively reveal. Multiple sources confirm the longtime couple actually split around March 2022 but have kept it close to the vest. We’re also told Prescott has been casually dating. Reps for the former couple didn’t immediately return Page Six’s request for comment. The athlete, 29, and Buffett, 25, began dating sometime in 2020 based on social media photos, though it’s unclear exactly when they became official. She posted their first picture together in honor of his 27th birthday, captioning the outdoorsy shot at the...
1 DAY AGO
Sportsnaut

While the NFC Championship Game always delivers matchups between some of the best teams in the conference, Sunday’s battle between
PHILADELPHIA, PA・2 DAYS AGO
thecomeback.com

The Dallas Cowboys suffered a disappointing loss to the Philadelphia Eagles on Saturday night, and it seems like it’s still affecting team owner Jerry Jones. During the season, Jones does a weekly appearance on local radio station 105.3 The Fan. But following this weekend’s playoff loss, the Cowboys team owner abruptly canceled his appearance this week.
1 DAY AGO
Sportsnaut

The Golden State Warriors dynasty has been ongoing for years and has been one of the most successful dynasties in the history of American sports. Now, the main architect of that team that shaped it into what it has been may be on his way out. The Athletic is reporting that Warriors’ General Manager Bob Myers may leave the Warriors when his contract expires this summer. There have been limited negotiations between the Warriors and Meyers, and he is “highly in demand” across the league.
LOS ANGELES, CA・1 DAY AGO
Deadline

EXCLUSIVE: Colin Kaepernick has signed with CAA for representation. The former NFL star holds the all-time NFL record for most rushing yards in a game by a quarterback. In 2016, he took a knee during “The Star Spangled Banner” to bring attention to systemic oppressions against Black and Brown people, and since then, has founded and helped to fund three organizations: Know Your Rights Camp, Ra Vision Media, and Kaepernick Publishing, which advance the liberation of Black and Brown people through storytelling, systems change, and political education. Related Story Anna Faris Signs With CAA Related Story Marilyn Manson Settles 'Game Of Thrones' Actress Esmé Bianco's...
15 HOURS AGO
Sportsnaut

When Golden State Warriors general manager Bob Myers joined the team as assistant GM back in 2011, the organization had
OAKLAND, CA・1 DAY AGO
Sportsnaut

Cincinnati Bengals quarterback Joe Burrow has won all three of his matchups with the Kansas City Chiefs over the past
CINCINNATI, OH・1 DAY AGO
Sportsnaut

NFL head coaches receive a brunt of criticism when their teams struggle. They don’t necessarily find themselves on the receiving
ARIZONA STATE・2 DAYS AGO
Sportsnaut

The New York Jets are expected to be a player in a potential Aaron Rodgers trade market, however, a unique
GREEN BAY, WI・18 HOURS AGO
Sportsnaut

Following another earlier-than-hoped exit from the NFL playoffs, the Dallas Cowboys are left wondering what they need to do to
DALLAS, TX・1 DAY AGO
Sportsnaut

Patrick Mahomes participated in the morning walkthrough and will do the same in afternoon practice with the Chiefs on Wednesday,
KANSAS CITY, MO・1 DAY AGO
Sportsnaut

Jalen Hurts and Brock Purdy are familiar foes, having met in one of the most exciting games of the 2019
NORMAN, OK・14 HOURS AGO
Sportsnaut

5 greatest comebacks in NFL history, including the ‘Monday Night Miracle’

Many football fans wonder about what are the greatest comebacks in NFL history, especially after two of the all-time best
19 HOURS AGO
Sportsnaut

After recent speculation suggested he might be the front-runner for the job, on Thursday the Carolina Panthers reportedly decided to
CHARLOTTE, NC・13 HOURS AGO
Sportsnaut

With NFL Championship Sunday getting going here soon, a lot of the focus is on injuries some of the game’s
7 HOURS AGO