Indiana man arrested for attempted murder of his mom after stabbing, strangling her 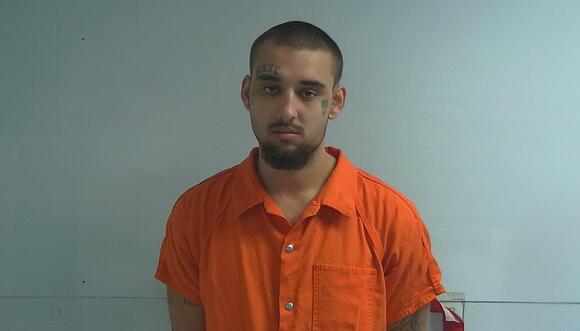 BATESVILLE, Ind. — An Indiana man who police say strangled and stabbed his mother multiple times has been arrested on multiple charges, including attempted murder.

Dalton Hall, a 22-year-old man from Bloomington, is currently being held in Ripley County Jail for his alleged role in the stabbing of Heather Mulcahy. His charges include:

The charges against Hall stem from a stabbing incident that occurred around 9 p.m. on Dec. 1 in Batesville, Indiana.

Local police officers were called to the Golden Villa Apartment on W. Boehringer Street after a family member of Mulcahy asked for a welfare check. Mulcahy, Batesville Police said, is Hall’s mom.

Upon arrival, BPD officers said they found Mulcahy laying on her bedroom floor with stab wounds on her neck and upper body. Police also found a bloody knife on the foot of her bed.

While inside the apartment complex, officers saw Hall in the hallway area. Mulcahy was quickly given medical treatment at the scene, BPD said, and was later taken to a hospital trauma center in Indianapolis. Police did not provide an updated condition for Mulcahy.

While being treated at the Indy hospital, police said Mulcahy told EMS workers that she was stabbed and strangled by her son, Dalton Hall, multiple times.

BPD officers began an investigation into the stabbing, tracking down Dalton Hall’s brother and Mulcahy’s other son Abraham. The brother, currently living in Hamilton, Ohio, told officers that Dalton had called him earlier asking where he could “get a good knife”.

A search warrant of the apartment that Mulcahy was found in was granted, and police collected physical evidence from the apartment and DNA from Dalton Hall.

Hall was taken into custody by BPD later that week. He is being held in county jail with a bond of $1 million cash and the Ripley County Prosecutor will determine appropriate charges.

He’s no man, a man doesn’t attack his Mother. Very Sad. Prayers for the Mother 🙏🙏🙏

so unfortunate...people don't know what happened and instead of praying that the demon comes out of him, you crucify him! demons are lurking everywhere!

MARION COUNTY, Ind. — Two juveniles were involved in a police chase Saturday morning that resulted in a car crash. According to the Marion County Sheriff’s Office, a deputy attempted to pull over a white Ford Escape that was traveling at a high speed with no lights on. The vehicle continued driving away and led the […]
MARION COUNTY, IN・1 HOUR AGO
FOX59

NORTH VERNON, Ind. — The Indiana State Police are investigating after a Jennings County sheriff’s deputy shot and killed a man allegedly armed with a handgun Friday while attempting to serve him a warrant in North Vernon. The incident began around 2:30 p.m. when the Jennings County Sheriff’s Department’s SWAT Team responded to an address […]
NORTH VERNON, IN・20 HOURS AGO
FOX59

INDIANAPOLIS — A man is dead following an overnight shooting that occurred inside of a food mart on Indy’s near west side. Indianapolis Metro police officers were called around 12:40 a.m. Saturday to the 3800 block of W. Michigan Street for a person shot. This is near a food mart at the intersection of Michigan […]
INDIANAPOLIS, IN・18 HOURS AGO
FOX59

INDIANAPOLIS — A 21-year-old is under arrest after a rash of shootings on Indy’s near west side that included homes and vehicles being shot up along with a person being grazed by a bullet. Elijah Oates was arrested by the Indianapolis Metropolitan Police Department on Tuesday for his alleged role in these incidents. Oates faces […]
INDIANAPOLIS, IN・1 DAY AGO
FOX59

Approximately one hour later police engaged in a short pursuit involving a vehicle that matched the description. Upon noticing the police, the man then proceeded to throw two firearms from the car onto the road.
INDIANAPOLIS, IN・1 DAY AGO
FOX59

New Castle man dead after fatal crash on I-70

HENRY COUNTY, Ind. — A man has died following a fatal vehicle crash on Interstate 70 in Henry County. Henry County Emergency Services responded to a 911 call Friday morning that a driver, 86-year-old John Beck Sr., had crashed his bronze 2010 Cadillac into the back of a parked semi-trailer on I-70. The semi-trailer was off […]
HENRY COUNTY, IN・3 HOURS AGO
FOX59

INDIANAPOLIS – Jurors found a man guilty in a deadly shooting on 465. Jurors convicted Briean Brown of murder, attempted murder and assisting a criminal in connection with the December 2021 shooting that killed Miguel Emery and seriously injured another person. The trial wrapped up at the end of January, with sentencing scheduled for March. […]
INDIANAPOLIS, IN・2 DAYS AGO
FOX59

INDIANAPOLIS – After a three-day trial, a jury convicted a man of murdering his uncle. Sylvester Ford was 16 years old when he shot and killed Devon Ford in February 2020. His case was waived to adult court, where he was charged with murder. On Feb. 16, 2020, officers with the Beech Grove Police Department […]
BEECH GROVE, IN・2 DAYS AGO
FOX59

INDIANAPOLIS — A 21-year-old man is under arrest after a rash of shootings on Indy’s near west side that included homes and vehicles being shot up along with a person being grazed by a bullet. Elijah Oates was arrested by the Indianapolis Metropolitan Police Department on Tuesday for his alleged role in these incidents. Oates […]
INDIANAPOLIS, IN・1 DAY AGO
FOX59

TRAFALGAR, Ind. — There is a new fundraiser to help a Trafalgar police officer who was paralyzed during a pursuit in June. The injury occurred seven months ago, and a young family’s world was turned completely upside down. “I never thought that this would be a position that I would find myself in,” said Trafalgar […]
TRAFALGAR, IN・22 HOURS AGO
FOX59

FRANKLIN, Ind. — Charges have been filed against a Franklin man accused of threatening a school bus full of children, striking a police officer, and shooting up a window in his own apartment over a two-day stretch. Franklin police were first called to an apartment on Cedar Lane Drive on January 4. A tenant told […]
FRANKLIN, IN・2 DAYS AGO
FOX59

IMPD reports the number of self-defense and non-criminal homicides has risen dramatically so far this year.
INDIANAPOLIS, IN・2 DAYS AGO
FOX59

INDIANAPOLIS — Four people, including two wanted men, are under arrest after state troopers were led on a chase through Indianapolis early Thursday morning. According to the Indiana State Police, the chase began at around 3:45 a.m. when a trooper saw a red Hyundai at 38th Street and Shore Drive drive straight from a turning […]
INDIANAPOLIS, IN・2 DAYS AGO
FOX59

When IMPD officers arrested Jermerrell Hubbard with a gun at the Carlton Apartments last Thursday, just six days after he was placed on probation for pleading guilty to a felony marijuana charge, their first instinct was to charge him with Level 5 Felony of Unlawful Carry of a handgun due to a previous felony conviction.
INDIANAPOLIS, IN・2 DAYS AGO
FOX59

1 person shot, killed on near northwest side after reported break-in

INDIANAPOLIS — One person was killed early Thursday in a shooting after a homeowner reported a break-in on the near northwest side of Indianapolis. Police were sent to the 1300 block of W. 26th Street (near N. Harding Street) just after 4:05 a.m. in reference to a person shot. IMPD confirmed a man with gunshot […]
INDIANAPOLIS, IN・2 DAYS AGO
FOX59

Carl Austin Sr. has given his son illegal drugs oxycodone, cannabinoids and benzodiazepine.
RANDOLPH COUNTY, IN・1 DAY AGO
FOX59

Man airlifted to Indy hospital after motorcycle crash in Kokomo

KOKOMO, Ind. — A motorcyclist was airlifted to an Indianapolis hospital following a Wednesday afternoon crash in Kokomo. According to the Kokomo Police Department, officers were dispatched around 3 p.m. Wednesday to a crash involving a 2002 Harley Davidson motorcycle and a 2012 Dodge Journey at Foster and Purdum streets. Police said the preliminary investigation […]
KOKOMO, IN・2 DAYS AGO