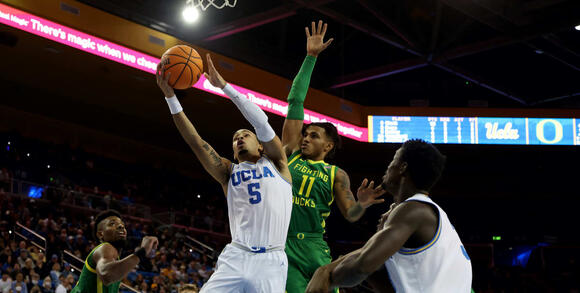 The Bruins ended Sunday's showdown at Pauley Pavilion on a 10-2 run to improve to 2-0 in early Pac-12 play.

A shaky start didn't stop the Bruins from picking up another home win.

UCLA held Oregon without a point for the first three minutes of action Sunday afternoon, while guard/forward Jaime Jaquez Jr. hit two layups to make it 4-0. The Ducks stormed back with a 9-0 run, though, and they eventually went up 12-6 on a 3-pointer by forward Quincy Guerrier.

After guard Jaylen Clark and big man Kenneth Nwuba scored a couple of times to trim the lead to one, every Bruin other than freshman guard Dylan Andrews went ice cold on offense.

Andrews scored UCLA's next six points, but no one else scored for eight minutes. That helped Oregon go back ahead and secure a 27-21 halftime lead.

Guards Tyger Campbell, David Singleton and Amari Bailey were 0-for-14 from the field and 0-for-4 from deep in the first half with zero points, one assist and five turnovers between them. UCLA was 0-for-7 from 3-point range, shooting 30.3% from the field compared to Oregon's 52.2% clip.

The Bruins turned things around right as the second half opened, with Jaquez cutting to the hole for a layup. The veteran wing got a steal the very next possession, lobbing it up the floor to Bailey for a fast break slam.

Clark and Campbell hit back-to-back 3-pointers to tie it up, then Clark hit 2-of-3 free throws to give the Bruins their first lead since the opening four minutes. When center Kel'el Ware hit a triple of his own to put the Ducks back ahead, Campbell and Bailey answered with another pair of buckets.

The starting backcourt continued their resurgence when Campbell hit a second-chance 3-pointer, and the point guard got an assist to Bailey one possession later.

The Ducks got it down to a one-point game with 4:22 to play after a pair of free throws, but the Bruins took full control not long after.

Jaquez hit two free throws of his own, and Bailey stepped inside the 3-point line for a big jumper. Jaquez came through in the clutch again with a turnaround elbow jumper, then he sent a touch pass to Bailey for a dunk that virtually sealed the win.

Oregon continued to jack up 3s while UCLA pulled away, with five of their last seven attempts coming from beyond the arc. None of them fell, with their only field goal in the last five minutes coming on a midrange jumper by guard Will Richardson.

The Ducks almost got some juice back with a dunk in the final two minutes, but Bailey came from behind to reject him.

Jaquez and Clark both broke double figures as well, and only two of the 11 Bruins who checked in finished with a negative plus/minus.

With the result, coach Mick Cronin has now defeated Oregon for the first time since coming to Westwood in 2019. He entered Sunday 0-4 against the Ducks, who had yet to play in front of a crowd at Pauley Pavilion since before Cronin took the job.

UCLA will now return to nonconference play tied for first place in the Pac-12. The Bruins' next game against Denver is set to tip off Saturday at 12 p.m..

Another preferred walk-on is joining the Bruins after announcing his commitment at his high school on Wednesday.
LOS ANGELES, CA・21 HOURS AGO
AllBruins

Singleton set a new record for most career appearances with the Bruins, and he has at least 12 games left in college.
LOS ANGELES, CA・22 HOURS AGO
AllBruins

UCLA vs. Washington: How to Watch, Game Info, Betting Odds

The Bruins will try to avoid a third-straight loss when they host the Huskies at Pauley Pavilion on Thursday night.
LOS ANGELES, CA・1 DAY AGO
AllBruins

Coming off road losses to Arizona and USC, the Bruins' veteran point guard will try to lead his team to victory at home on Thursday.
LOS ANGELES, CA・1 DAY AGO
AllBruins

The Bruins will face the Huskies at Pauley Pavilion on Thursday after losing back-to-back Pac-12 contests.
LOS ANGELES, CA・1 DAY AGO
AllBruins

Another lineman has been added to the Bruins' recruiting board as Tim Drevno continues to turn up the heat on the recruiting trail.
LOS ANGELES, CA・2 DAYS AGO
AllBruins

The Bruins' latest walk-on commit could be moving to running back when he gets to Westwood ahead of the 2023 season.
LOS ANGELES, CA・2 DAYS AGO