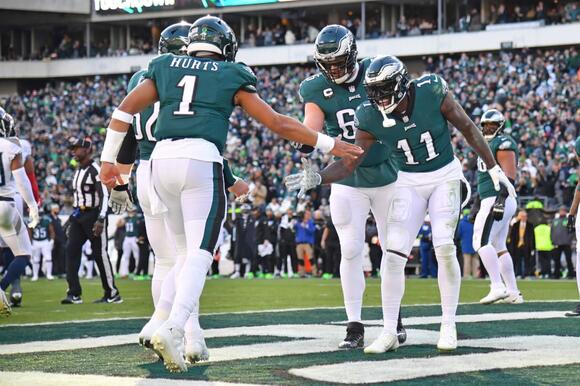 PHILADELPHIA - With those still looking for a complete performance from the 11-1 Eagles, they got it on Sunday in the form of a 35-10 victory over an AFC playoff-level foe in Tennessee.

The workmanlike effort saw the Eagles outgain the Titans 453 to 209 behind a dominant defensive line that piled up six sacks and an MVP candidate in quarterback Jalen Hurts, who piled up 380 yards of passing and four touchdowns - three in the air and one on the ground.

PASSING OFFENSE - The Titans came in with the reputation of good vs. the run and poor against the pass and that held to form, at least the latter. The Eagles didn't run it that much because they didn't have to. That's because Philadelphia could pass it at will.

Maybe the best example of that is A.J. Brown seemingly getting loose for a 40-yard touchdown. Turns out Brown didn't get his second foot down so Hurts simply went back to him on the next play for a 40-yard score.

Hurts finished with 380 passing yards - seven short of a career-high - despite exiting with 9:40 left.

“I think he’s been playing really good ball," Brown said of Hurts. "I’m not going to try and put any pressure on him. He’s been doing an amazing job on the ground and throwing the ball.

"We’ll leave all the MVP stuff to who votes for all that. But, he’s doing a great job leading this team. He’s a great leader. He’s still climbing. He wants the team to be great.”

A.J. BROWN - Brown came into this game feeling he won in his personal move from Nashville to Philadelphia. He had a big hug for Mike Vrabel pre-game because his old coach certainly didn't want to lose the big WR1. In-game, Brown showed why with eight receptions for 119 yards and two touchdowns.

SPECIAL TEAMS TWEAKS - The Eagles were going to make some special teams tweaks after a poor performance against Green Bay, some that would be noticeable to fans and some others that weren't.

One of the obvious moves was elevating Christian Elliss from the PS to help and the young LB did exactly that proving to be an upgrade as a blocker and on coverage. Tennessee's big-legged punter, Ryan Stonehouse, consistently outkicked his coverage as well, which enabled Britain Covey to have a career day on punt returns.

"What a bounce back game, right?" coach Nick Sirianni said. "So, we had those three kickoff returns that really sat with us all week, and then it was just a great bounce-back game.

"[LB] Nakobe [Dean] came down and lit somebody up. [WR] Britain Covey. We got a lot of good production out of our rookies and our second-year players. [LB] Christian Ellis, [WR] Britain Covey, Nakobe, [LB] Shaun Bradley, [S] K'Von [Wallace], [S] Andre [Chachere], all those guys came out."

PASS RUSH - Titans quarterback Ryan Tannehill looked more like a rookie than a seasoned veteran, often unsure of what he was seeing and failing to pull the trigger, something that resulted in six sacks by the Eagles' front.

Josh Sweat was the leader with two while Javon Hargrave, Brandon Graham, Fletcher Cox, and Haason Reddick also all got home.

"I thought our D-line just ruined that game," LB T.J. Edwards said. "I thought they were dominant, all across the board. They’re stopping the run, and in the drop-back pass game they were getting to the quarterback as well, so I thought the front had a really good game."

DISCIPLINE - The Eagles were called for 12 penalties, including seven false starts from six different players. That would be unacceptable on the road with silent counts never mind at home.

-John McMullen contributes Eagles coverage for SI.com's Eagles Today and is the NFL Insider for JAKIB Media. You can listen to John, alongside legendary sports-talk host Jody every morning from 8-10 on ‘Birds 365,” streaming live on YouTube. John is also the host of his own show "Football 24/7 and a daily contributor to ESPN South Jersey. You can reach him at jmcmullen44@gmail.com or on Twitter @JFMcMullen

It’s the sound of hearts breaking across Philadelphia and the state of Pennsylvania… and let’s be honest, everywhere else in the country, too. Eagles quarterback Jalen Hurts made a very rare public appearance with his girlfriend Bryonna “Bry” Burrows after the NFC Championship game this past Sunday, which is a surprise to many fans, as he is extremely private about his life outside of football.
PHILADELPHIA, PA・2 DAYS AGO
prosportsextra.com

It’s never a good day when you’re learning about someone passing away especially if you’re attached to that person. And if you’re a Pittsburgh Steelers fan and have been a fan of the team for awhile this might have hit you hard. Former Steelers running back...
PITTSBURGH, PA・12 HOURS AGO
OnlyHomers

The New England Patriots are currently set up well with two young quarterbacks, Mac Jones and Bailey Zappe, who both have winning records as starting quarterbacks during their short tenure in the league.
14 HOURS AGO
EagleMaven

The Cowboys owner will watch his nemesis play in its second Super Bowl in six seasons and third this century while readying to make a big investment in Dak Prescott
PHILADELPHIA, PA・18 HOURS AGO
sportszion.com

Tom Brady retired on Wednesday after a disappointing season playing for the Buccaneers. The NFL GOAT was undoubtedly under the pump after his haters had accused him of the Buccaneers’ downfall. Many people pointed out that his age- being a 45-year-old player- that did not allow him to play swiftly and made a meal out of accessible scoring opportunities. There is more to it, as multiple sources claim that Tom Brady’s teammates were no less than haters in the worst of times of TB12. All the hate might have pushed Tom to retire!
TAMPA, FL・19 HOURS AGO
EagleMaven

The Eagles veteran DE said he was happy the play came against another Michigan guy and changed the trajectory of how he is viewed as a player
PHILADELPHIA, PA・13 HOURS AGO
EagleMaven

Kansas City leads the all-time series 5-4, and here's a quick glimpse at each game played
PHILADELPHIA, PA・1 DAY AGO
EagleMaven

The two Super Bowl QBs have busted through glass ceilings of race, experience, and style of play
PHILADELPHIA, PA・11 HOURS AGO
EagleMaven

Co-hosts Ed Kracz and Conor Myles discus many topics as the Eagles prepare for their second Super Bowl in six seasons
PHILADELPHIA, PA・17 HOURS AGO
EagleMaven

The Philadelphia Eagles accomplished in the playoffs something not done in more than 30 years, but will it mean success in the Super Bowl?
WASHINGTON, PA・1 DAY AGO