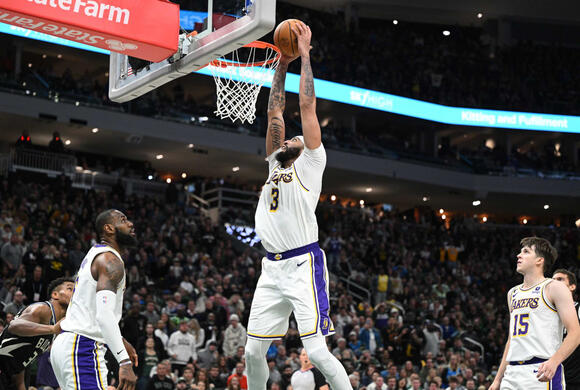 Perhaps a little too much.

During Friday night's impressive 133-129 Los Angeles Lakers win on the road against the formidable 16-6 Milwaukee Bucks, L.A. superstar center Anthony Davis had yet another incredible game in a recent run of stat-stuffing excellence. He scored 44 points on 18-of-27 shooting from the floor and 6-of-7 shooting from the charity stripe. AD also chipped in 10 rebounds, four assists and three blocks.

Per Jovan Buha of The Athletic , Davis was particularly excited to be performing so well because one of his favorite NFL players was sitting courtside to take in the action: Green Bay Packers quarterback and four-time NFL MVP and one time Super Bowl champ Aaron Rodgers. Davis, famously, is a lifelong Packers fan. Though he's a native Chicagoan, this is somewhat understandable given that the Bears, AD's local team and the Packers' arch nemeses, have only been fleetingly good during Davis's lifetime.

L.A. is currently in the midst of a matinee bout against the Washington Wizards as it hopes to keep the positive vibes going for the second game of its current six-game road trip. The 9-12 team has looked impressive of late, having won seven of its last nine contests mostly behind the play of Davis, LeBron James, Russell Westbrook, Lonnie Walker IV and Austin Reaves. But, you know, especially Davis.

Both Rodgers's Packers and the Bears have seen better days. Earlier today, the two teams squared off, and Green Bay won, 28-19, to move to a still-bad 5-8 record on the year. The 3-10 Bears are more or less openly tanking at this point, having traded several current contributors for future assets.

Lakers Rumors: LA Interested in Trading for Scoring Guard Who is a Favorite Player of LeBron James

Any scorer to help lighten the load for LeBron James is a good one.
LOS ANGELES, CA・2 DAYS AGO
Us Weekly

Jessie Lemonier, a former NFL linebacker, has died. He was 25. “We are shocked and saddened to learn of the passing of former Detroit Lion Jessie Lemonier,” the Detroit Lions wrote in a Thursday, January 26, in a statement shared via Twitter. “Jessie was a model teammate and wonderful young man who is gone far […]
FLORIDA STATE・2 DAYS AGO
AllLakers

Could the Lakers bring back an old friend?
LOS ANGELES, CA・2 DAYS AGO
OnlyHomers

Tragic news has struck the world of professional wrestling with the word that one of wrestling's biggest stars has lost his life at the age of 38. Celebrity entertainment outlet TMZ, which is known for breaking the news of many deaths of famous people around the world, broke the news of the death of legendary wrestler Jay Briscoe, who has tragically died in a car crash at the age of 38.
1 DAY AGO
BasketballNetwork.net

Kenny Smith details just how miserable the culture of the Sacramento Kings was, having spent 3 years with them
SACRAMENTO, CA・19 HOURS AGO
AllLakers

The 2020 champ would look good back in the purple and gold.
LOS ANGELES, CA・13 HOURS AGO
AllLakers

The ex-LA guard was shipped out to D.C. as part of the Rui Hachimura deal.
LOS ANGELES, CA・1 DAY AGO
AllLakers

Lakers News: Rui Hachimura Is The Best NBA Player In This Defensive Category

The newest LA roster addition could have some upside.
LOS ANGELES, CA・1 DAY AGO
AllLakers

There's almost no chance this will happen, though.
LOS ANGELES, CA・6 HOURS AGO
AllLakers

Lakers News: Should We Bet Big On Los Angeles As It Strives To Beat Boston?

AD had a 21-point, 12-rebound double-double in just over 26 minutes.
LOS ANGELES, CA・1 DAY AGO
AllLakers

The Lakers are starting to get healthier.
LOS ANGELES, CA・8 HOURS AGO
AllLakers

Lakers News: Lonnie Walker, Austin Reaves To Be Reassessed Ahead Of Road Trip

LA's two best wings have been out since December.
LOS ANGELES, CA・1 DAY AGO
AllLakers

The LA swingman seems to be on the mend!
LOS ANGELES, CA・2 DAYS AGO