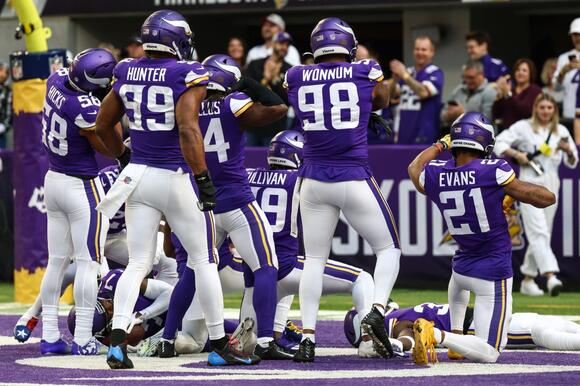 Evans left the game after a big collision with Harrison Smith but says he's feeling OK.

Vikings rookie cornerback Akayleb Evans made his second career start on Sunday, returning from missing the last two games with a concussion. Unfortunately, he was forced out of the win over the Jets with more concussion symptoms that popped up following a collision over the middle of the field in the third quarter.

"He's in the protocol," head coach Kevin O'Connell said. "At one point, he was evaluated and cleared by the independent (neurologist) and by our sideline, and then as the game kind of went on, you always keep an eye on those players, especially guys that have had some things come up. He started to have some symptoms and reported them. We'll take a look at where he's at, but we immediately got him back out of the game, and we'll keep an eye on him."

Evans tweeted "I'm feeling good I promise!" after the game. However, because he — like left tackle Christian Darrisaw — has now left multiple games to enter the concussion protocol, his status for next Sunday's game against the Lions is certainly up in the air.

Monday update: O'Connell has already ruled out Evans for the game in Detroit.

Duke Shelley, who started the loss to the Cowboys a couple weeks ago, entered for Evans and was busy, finishing with four tackles and two passes defended.

Evans had six tackles and a PBU of his own before leaving the game. He nearly had an interception in the first quarter when a Mike White pass bounced off former Vikings TE Tyler Conklin's chest, but teammate Cam Bynum collided with Evans and the ball fell to the ground.

Between that near-pick and Smith accidentally blasting him in the third quarter, Evans jokingly tweeted that his safeties owe him a meal.

The only other injury news for the Vikings coming out of this game is that defensive tackle Jonathan Bullard hurt his right bicep in the first half, ending his day. He'll get an MRI. The Vikings were also without DT Ross Blacklock (illness), but they got Dalvin Tomlinson back for this game after he had missed the last four with a calf injury.

Heading into next week's game against the Lions, the statuses of Darrisaw, Evans, and Bullard will all be worth monitoring.

Thanks for reading. Make sure to bookmark this site and check back daily for the latest Vikings news and analysis all offseason long. Also, follow me on Twitter and feel free to ask me any questions on there.

The Vikings never beat Tom Brady during his incredible career with the Patriots and Buccaneers.
MINNEAPOLIS, MN・2 DAYS AGO