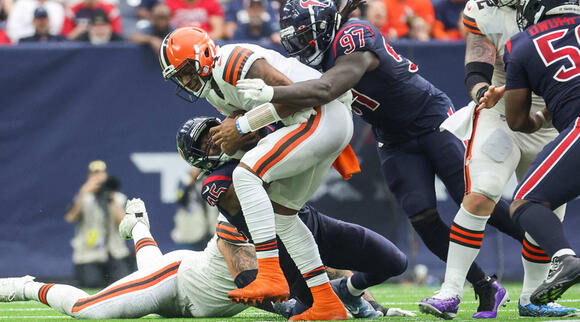 If the Browns were expecting their new QB to be Superman right away, Sunday served as proof of how far away they still might be.

Deshaun Watson’s return from an 11-game suspension stemming from more than two dozen lawsuits detailing graphic accounts of sexual harassment and sexual assault —or, as one unequipped television broadcaster Sunday chose to call it, “his long road back”—looked exactly like a guy taking a football field who hasn’t seen , or been able to effectively simulate, live-game speed in almost two years.

That’s mostly what we’re prepared to say right now, which is the ultimate insult to the hot-take gods, who lobbed us up a dunkable ball Sunday.

Most of Watson’s 22 throws were scattershot. He looked visibly uncomfortable, a step slow and somewhat unwilling to run in the open field. The Browns, as predicted, relied heavily on a running game and defense to beat the worst team in the NFL, the 1-10-1 Texans. They did not score an offensive touchdown. Watson completed only 12 passes for 131 yards. He was picked off in the end zone, and Nick Chubb was dropped for a safety for good measure. The cheap, easy schadenfreude for the many people rooting against the Browns was readily available for purchase like a homemade, unlicensed shirt being sold in the parking lot.

The truth is we will not know for a long time whether the Browns have made a critical error (strictly in terms of their judgment of his abilities on the field) in trading away a significant amount of draft capital to sign him to a lucrative contract . The offensive line did not lay down at the beginning of every snap, allowing him to get sacked each down as some kind of public penance. Coach Kevin Stefanski did not stand at midfield and beg to start Jacoby Brissett or else he’d walk away and join the USFL. The owner, Jimmy Haslam, didn’t hop on the broadcast and say, “Yeah, we got caught up in winning and now realize what an awful mistake we made.”

And so, they are in this thing. For better or worse. For most of the next decade. We’re off and running.

The Browns are probably hoping they can just toss the tape from this game into the garbage and, from a public relations standpoint, consider this the hardest part of ever having Watson as their quarterback. (I’m wondering, if other teams had known broadcast crews would be this friendly to Watson, if they would have tried to sign him as well.) And while we certainly expect Watson to get better as he acclimates to the NFL again, one of the fascinating aspects of a start where a player is essentially reduced to his most basic of instincts is that those innate QB tendencies are easier to dissect and pin down than they ever have been. Teams can replicate this discomfort. Watson and the Browns, to stave off the kind of deep, dark criticism that will almost certainly obliterate the franchise in a way that makes moving to Baltimore seem favorable, will have to get much better, much faster than anyone may have expected.

The excuse that he is merely working his way back after a suspension of his own doing will hold up for only so long. That is why Sunday’s tape is worth hanging on to. The coaching staff must figure out which aspects of his inefficient game might linger.

On Sunday, Watson played a little bit worse than Michael Vick did in his first full start for the Eagles after serving 18 months in a federal prison for his role in a dog-fighting ring. He played much worse than Peyton Manning did for the Broncos in his first start back after a year of rehabilitation from a herniated disk. It’s unclear whether anyone expected Watson to light up his former team, but it’s also unclear whether they expected him to look this raw.

Sunday’s win was a nice, literal glimpse of what Watson’s teammates have been doing from an emotional standpoint for most of the season. In the locker room, they’ve been complimenting his leadership skills and, essentially, trying to turn valid public criticism of his signing into some kind of evidence of “haters” disliking them for no good reason. They’ve been carrying the load with a popular player in Brissett under center . This, I’m sure, is much easier when there is a payoff on the horizon. When there is a presumed Superman working his way back to the field.

Sunday showed just how far away that might be. Time will tell how long everyone is willing to wait.

It’s the sound of hearts breaking across Philadelphia and the state of Pennsylvania… and let’s be honest, everywhere else in the country, too. Eagles quarterback Jalen Hurts made a very rare public appearance with his girlfriend Bryonna “Bry” Burrows after the NFC Championship game this past Sunday, which is a surprise to many fans, as he is extremely private about his life outside of football.
PHILADELPHIA, PA・2 DAYS AGO
OnlyHomers

The New England Patriots are currently set up well with two young quarterbacks, Mac Jones and Bailey Zappe, who both have winning records as starting quarterbacks during their short tenure in the league.
15 HOURS AGO
Sports Illustrated

The Chiefs tight end called the Cincinnati mayor a ‘jabroni’ after the team’s win.
CINCINNATI, OH・2 DAYS AGO
prosportsextra.com

It’s never a good day when you’re learning about someone passing away especially if you’re attached to that person. And if you’re a Pittsburgh Steelers fan and have been a fan of the team for awhile this might have hit you hard. Former Steelers running back...
PITTSBURGH, PA・12 HOURS AGO
Sports Illustrated

The quarterback is still contemplating whether he will return for his 19th NFL season or not.
GREEN BAY, WI・2 DAYS AGO
Sports Illustrated

Now that he’s retired, Fox has a dilemma regarding its No. 1 NFL booth.
1 DAY AGO
Sports Illustrated

Cameras caught what the two said to each other on the field after the AFC championship game.
CINCINNATI, OH・2 DAYS AGO
Sports Illustrated

The Bay Area native weighed in on an unfortunate Sunday for the 49ers.
SAN FRANCISCO, CA・2 DAYS AGO
Sports Illustrated

The greatest quarterback of all time always knew how to make the correct decision on the field. So it's no surprise that he ended his career at precisely the right moment.
MICHIGAN STATE・1 DAY AGO
Sports Illustrated

They seem to be sick of people talking about it already.
1 DAY AGO
Sports Illustrated

The hiring comes after Denver fired Nathaniel Hackett after 15 games in his first season.
DENVER, CO・2 DAYS AGO
Sports Illustrated

Cincinnati police issued an arrest warrant for the Bengals running back stemming from an incident that reportedly took place on Jan. 21.
CINCINNATI, OH・7 HOURS AGO
Sports Illustrated

Jimmy Garoppolo was having a great year—until he wasn't. He may find greener pastures via free agency.
2 DAYS AGO
Sports Illustrated

The former teammates played together for 11 seasons and won four Super Bowls in that span.
1 DAY AGO
Sports Illustrated

The veteran quarterback is a free agent this offseason.
SAN FRANCISCO, CA・1 DAY AGO
Sports Illustrated

Players With Most Career NFL Games But No Super Bowl Appearances

These players all had long, successful careers, but never made it to the big game.
WASHINGTON STATE・9 HOURS AGO