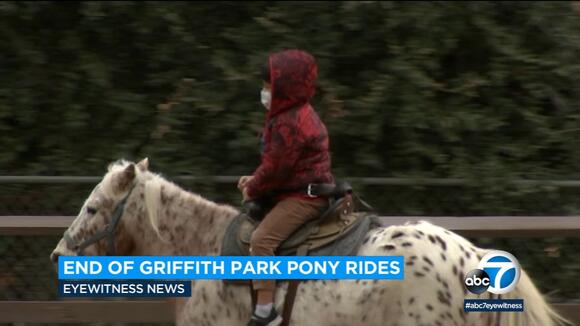 The Griffith Park Pony Rides, a longtime attraction at one of Los Angeles' most recognizable landmarks, will shut down later this month, according to the city. "At the request of the City Council, the Department will undertake a community input process to re-imagine the recreational and educational activities offered at this location in Griffith Park to continue providing youth and families an affordable and enjoyable experience," a statement on the city's Department of Parks website . The statement announced that the Griffith Park Pony Rides concession contract will expire on Dec. 21 and, "after careful consideration," the department decided not to extend the contract. WATCH NOW ABC7 Los Angeles 24x7 Streaming channel The pony rides are scheduled to be closed to the public beginning Dec. 22. The attraction has been popular with families but has also been the subject of criticism from animal-rights activists.

In November 2021, a group held a protest at Griffith Park, claiming that animal welfare laws were being broken. The Los Angeles Alliance for Animals demanded that the city enact an ordinance banning pony rides. "Animal welfare laws, created with the input of veterinarians and equine experts, are constantly ignored by the pony ride operator and are never enforced by Park and Recreation, and Los Angeles Animal Services nor Los Angeles Police Department," the LAAA said at the time, claiming it had been monitoring the rides since July of that year. "The Pony rides concession is animal cruelty disguised as child entertainment. Unkind treatment of animals doesn't align with Los Angeles values. Los Angeles has passed the fur ban, bull hook ban, and no wild animals in private parties." The Griffith Park Pony Rides and Petting Zoo issued a statement in November 2021, saying the facility was routinely inspected by city and county of Los Angeles to "assure the safe and humane treatment of every animal."

This is the DUMBEST thing these activists have ever done!! Shame on them for ruining everything for the children AND animals!!! Are these activists going to now care for these animals? They are thoughtless!!! Sorry kids.

Activists ruined everything. They think they do the right thing but they are actually making it worst. Where those animals are going to end up?

it's a shame to take this away from our kid's an grandkids , back in the day my mom an dad took me an my brother an sister and I took my daughter an now my grandchild will never get the chance to go why people why they are not doing everything wrong

Amber Miller is opening the doors of her spa to Long beach teenagers so they can learn business and life skills.
LONG BEACH, CA・16 HOURS AGO
ABC7

The nonprofit Hollywood Partnership opened it's new community dispatch center, part of an experiment that could have implications for the entire city of Los Angeles
LOS ANGELES, CA・2 DAYS AGO
ABC7

Port of Los Angeles and Long Beach continue to go green, looking toward a climate-friendly future

The massive Port of Los Angeles -- with its ships, trucks and cranes -- has gone green. Here's how the sprawling operation switched to clean energy so quickly.
LONG BEACH, CA・2 DAYS AGO
ABC7

Activists took to the streets of Los Angeles to protest police brutality after the release of video showing the fatal beating of Tyre Nichols at the hands of former Memphis police officers.
LOS ANGELES, CA・10 HOURS AGO
ABC7

Those killed by a gunman who opened fire at a Monterey Park dance hall are being remembered by friends and family for the zest for life that brought them out that night to celebrate the Lunar New Year.
MONTEREY PARK, CA・23 HOURS AGO
ABC7

The cast and crew of the Oscar-nominated film "Everything Everywhere All at Once" honored the victims of the Monterey Park massacre with a touching Lunar New Year celebration at one of the city's popular restaurants.
MONTEREY PARK, CA・2 DAYS AGO
ABC7

One person was rushed to the hospital with injuries after an explosion occurred on the University of Southern California campus Thursday afternoon, authorities said.
LOS ANGELES, CA・1 DAY AGO
ABC7

At least three people were killed and four others were wounded in a shooting in Beverly Crest early Saturday morning, according to police.
LOS ANGELES, CA・2 HOURS AGO
ABC7

Watch as over 100,000 spectators in Los Angeles' Chinatown celebrate the Year of the Rabbit.
LOS ANGELES, CA・1 DAY AGO
ABC7

The 2023 Greater Los Angeles Homeless Count, a point-in-time snapshot of homelessness in Los Angeles County that helps determine the distribution of funding and services to the unhoused, is set to begin.
LOS ANGELES COUNTY, CA・3 DAYS AGO
ABC7

Family and friends honored Elliot Blair, an Orange County lawyer who died on vacation in Mexico, during a vigil Thursday night, as questions remain about the circumstances of his death.
ORANGE COUNTY, CA・22 HOURS AGO
ABC7

Video of a driver defending his rights as he denied a Costa Mesa police officer access to a vehicle for a search has gone viral on social media.
COSTA MESA, CA・14 HOURS AGO
ABC7

Adrian Galera bought his 73-year-old godfather a ticket to Countdown in San Bernardino after he expressed his wish to attend his first-ever festival.
SAN BERNARDINO, CA・3 HOURS AGO
ABC7

A couple in Arcadia is selling doughnuts to raise money for the victims of the Monterey Park mass shooting. It's an effort to honor the victims, including one who was very close to the couple.
MONTEREY PARK, CA・1 DAY AGO