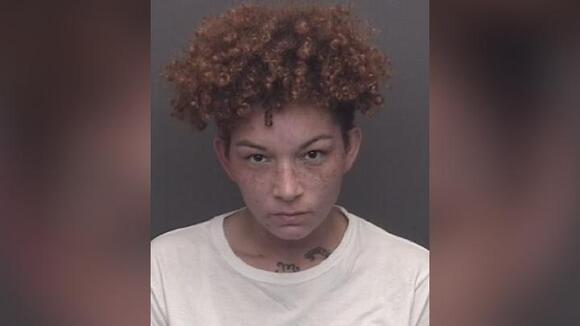 EVANSVILLE, Ind. (WEHT) – Police in Evansville said a woman was arrested after purposely hitting her boyfriend with her car.

Police said they were sent to the area of North 9th Avenue and West Michigan Street early Sunday morning.

According to a police report, officers found a man on the ground.

Police said the man told them that he had gotten into an argument with his girlfriend, Alexandrea Johnson, and she chase him with her car and hit him.

Officers said Johnson also hit a fence and sign on Franklin Street and left the scene.

The man was taken to a local hospital. According to police, Johnson was later found and arrested.

She was charged with battery committed with a deadly weapon.

(WEHT) - Officials have released the names of seven officers involved in the west side Walmart shooting on January 19.
EVANSVILLE, IN・5 HOURS AGO
WEHT/WTVW

EVANSVILLE, Ind. (WEHT) — Police are searching for a suspect who broke into an Evansville grocery store overnight and made off with cash, sandwiches and Delta 8 vape pens. The crime, which was reported in the early hours of Saturday morning, happened at the Sunbeam Market on N Kentucky Avenue. Officers say they responded to […]
EVANSVILLE, IN・1 DAY AGO
WEHT/WTVW

(WEHT) - An Evansville man was arrested after police say he fired a gun inside a bar on Green River Road.
EVANSVILLE, IN・40 MINUTES AGO
WEHT/WTVW

WEST MARYVILLE, Tenn. (WTWO/WAWV) — U.S. Marshals have announced the capture of a man wanted in Knox County after police accused him of shooting a family member during a domestic dispute. According to U.S. Marshal David Jolley of the Eastern District of Tennessee, the Marshals Service Smoky Mountain Fugitive Task Force received a tip on […]
MARYVILLE, TN・2 HOURS AGO
WEHT/WTVW

Problematic ice throws vehicles off course in I-64, Hwy 65 area

INDIANA (WEHT) – A string of accidents on I-64 and Highway 65 has caused some traffic headaches near the Vanderburgh-Posey County line. A wreck involving a pickup and a car resulted in a roll off over a guardrail, while a semi and another car have both slid off the road in the area. According to […]
POSEY COUNTY, IN・5 HOURS AGO
WEHT/WTVW

UTICA, Ky. (WEHT) — The Daviess County Sheriff’s Office has identified the man that passed away in a fatal accident Saturday evening. Authorities say 53-year-old David Jones of Utica died in the single-vehicle accident. Shortly after 5:30 p.m., first responders were dispatched to the 2100 block of Highway 140E in Utica for an accident with […]
DAVIESS COUNTY, KY・2 DAYS AGO
WEHT/WTVW

CENTRAL CITY, Ky. (WEHT) — A police pursuit landed one man in jail over the weekend in Muhlenberg County. A Central City PD officer says he tried to pull over a driver with only one headlight Saturday. The driver, later identified as Dustin Detalente, allegedly sped down a parking lot, nearly hitting other cars. According […]
CENTRAL CITY, KY・2 DAYS AGO
WEHT/WTVW

GCSO: Roads are slick, so stay home or drive slow

Snow and ice causing morning accidents in the Tri-State

EVANSVILLE, Ind. (WEHT) – Your Weather Authority forecasted sleet and freezing rain Monday night into Tuesday morning and mother nature brought plenty of the wintry mess making the morning drive tough. According to Indiana State Police Sergeant Todd Ringle, shortly after 7am, the morning drive accidents began. He listed the following crashes on his Twitter: […]
VANDERBURGH COUNTY, IN・8 HOURS AGO
WEHT/WTVW

DAVIESS CO., Ky. (WEHT) — Law enforcement agencies responded to a fatal crash in Daviess County Saturday evening. Dispatch says the single-vehicle accident happened along Highway 140. The Daviess County Sheriff’s Office tells us one person passed away in the accident, two were taken to the hospital. Crews are on scene reconstructing the crash. The […]
DAVIESS COUNTY, KY・2 DAYS AGO
WEHT/WTVW

EVANSVILLE, Ind. (WEHT) — Officials in Evansville are investigating after a storage facility caught fire early Monday morning. The fire started just before 6 in the morning at Stor-N-Lock on Kratzville Road. Witnesses on the scene told Eyewitness News someone had been living in one of the units, but it’s unclear if they are linked […]
EVANSVILLE, IN・22 HOURS AGO
WEHT/WTVW

EVANSVILLE, Ind. (WEHT)– Two structure fires nearly 40 minutes apart kept Evansville firefighters busy on Saturday night. The first call came in around 7:30 Saturday night. Neighbors called 911 after hearing popping noises outside and seeing flames. Firefighters noticed flames coming from the back of one home, before spreading to two other homes. It was […]
EVANSVILLE, IN・1 DAY AGO
WEHT/WTVW

EVANSVILLE, Ind. (WEHT) — EvansvilleWatch has once again given back to the community’s first-responders in a meaningful way. Over the weekend, the group surprised the Local 357 Executive Board with a large framed print. The photo, which was captured by Evansville Aerial, showed Evansville Firefighters working during the Garvin Street warehouse fire late last year. […]
EVANSVILLE, IN・1 DAY AGO
WEHT/WTVW

The Indiana State Police say it arrested an Otwell man on drug charges due to a traffic stop on Wednesday night.
OTWELL, IN・4 DAYS AGO
WEHT/WTVW

MORGANFIELD, Ky. (WEHT) — A man missing since Thursday night has been found deceased, Union County Emergency Management officials say. We’re told the body of 76-year-old James Nicholson was found on Saturday. EMA officials say that they began an immediate search of the area after his abandoned vehicle was spotted by family. Crews located Nicholson […]
MORGANFIELD, KY・3 DAYS AGO
WEHT/WTVW

Crews respond to fire at Kennedy Towers in Evansville

EVANSVILLE, Ind. (WEHT) — Firefighters were on scene of a structure fire at the Kennedy Towers apartment complex in Evansville. Dispatch tells us crews were dispatched to the fire at 8:11 p.m. on Saturday. Firefighters on scene tell us the fire started on the 7th floor. Fire officials have at least two ladder-trucks on scene. […]
EVANSVILLE, IN・2 DAYS AGO
WEHT/WTVW

HOLLAND, Ind. (WEHT) — Early Thursday morning, a Dubois County drug bust ended in the roundup of three suspects on multiple felony charges. The drug investigation led investigators to a Holland home on January 26. Deputies say they met David A. Gabberd at the front door and asked him if Chad Klein lived there. When […]
DUBOIS COUNTY, IN・4 DAYS AGO
WEHT/WTVW

HOPKINS CO., Ky. (WEHT) — One man is dead after a camper fire in Hopkins County. The sheriff’s office says units were dispatched to the fire on the 400 block of Fugate Avenue in Earlington at 2:21 a.m. Firefighters arrived and found a camper largely consumed by fire, possibly with someone trapped inside. Once the […]
HOPKINS COUNTY, KY・2 DAYS AGO