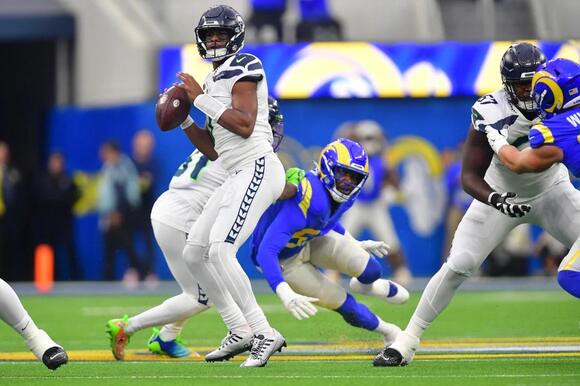 Tensions are already high at SoFi Stadium, where the Seattle Seahawks are looking to avoid their third consecutive loss as they take on the Los Angeles Rams, who are starting backup John Wolford at quarterback.

A few weeks ago, Geno Smith was being touted as a potential MVP candidate , and Kenneth Walker III had been building a strong case to win NFL’s Offensive Rookie of the Year .

But that was when the Seahawks were sailing, leading the NFC West.

We saw some of those frustrations come out on the sideline early during Seattle’s matchup with their division rivals as they aim to knock off the Rams.

Despite not having their starting QB, with Matthew Stafford placed on injured reserve , Sean McVay had his Rams ready to play from the start.

Wolford marched the Rams down the field for a 10-play, 77-yard drive ending in a one-yard Cam Akers touchdown run, putting the Seahawks behind the eight-ball.

The Seahawks were able to match the Rams’ scoring effort on the ensuing drive but ended up having to punt on their next possession.

That’s when we saw Smith and Walker get into a fiery argument on the sideline, with the two teammates pointing fingers at each other, seemingly trying to avoid blame.

While it’s unknown exactly what this brief blowup was about, it’s not likely to fester into anything major. Football tends to stir these situations up thanks to the intense competition on gameday, with everyone striving toward one goal — winning.

Walker later had to leave the game with an ankle injury and is considered questionable to return.

It’s the sound of hearts breaking across Philadelphia and the state of Pennsylvania… and let’s be honest, everywhere else in the country, too. Eagles quarterback Jalen Hurts made a very rare public appearance with his girlfriend Bryonna “Bry” Burrows after the NFC Championship game this past Sunday, which is a surprise to many fans, as he is extremely private about his life outside of football.
PHILADELPHIA, PA・1 DAY AGO
Athlon Sports

The Pittsburgh Steelers and Philadelphia Eagles have been in the NFL since its inception. The two teams even briefly combined forces during World War II and called themselves the Steagles. The players and coaches didn’t like it then and the two fan bases don’t like each other now. Fans from the same state rarely get along and the vitriol was on display after the Eagles made their second Super Bowl in five seasons.
PHILADELPHIA, PA・2 DAYS AGO
Sportsnaut

Just 11 days away from Super Bowl LVII, a member of the Philadelphia Eagles roster has been indicted on charges
PHILADELPHIA, PA・1 HOUR AGO
Sportsnaut

The San Francisco 49ers lost the NFC Championship Game on Sunday after injuries forced them to use a fourth-string quarterback.
SAN FRANCISCO, CA・2 DAYS AGO
Sportsnaut

Green Bay Packers quarterback Aaron Rodgers has yet to make a decision about playing in the NFL next season. Appearing
GREEN BAY, WI・21 HOURS AGO
Larry Brown Sports

While Tom Brady’s retirement may disappoint some San Francisco 49ers and Las Vegas Raiders fans that were hopeful their teams
LAS VEGAS, NV・2 HOURS AGO
Sportsnaut

After five years as starting quarterback for the Baltimore Ravens, now Lamar Jackson’s contract is expired, and the former NFL
BALTIMORE, MD・22 HOURS AGO
Sportsnaut

Philadelphia Eagles rookie offensive lineman Josh Sills has been indicted on one count of rape and one count of kidnapping
GUERNSEY COUNTY, OH・1 HOUR AGO
Sportsnaut

San Francisco 49ers left tackle Trent Williams is mulling all options as he heads into the offseason — including retirement.
WASHINGTON, CA・1 HOUR AGO
Sportsnaut

Former New Orleans Saints coach Sean Payton is about to become the head coach of the Denver Broncos. According to
DENVER, CO・20 HOURS AGO
Sportsnaut

The New York Giants are likely to retain starting quarterback Daniel Jones in the offseason. However, if long-term contract talks
ALABAMA STATE・2 DAYS AGO
Sportsnaut

Titans switching to turf surface for 2023

The Tennessee Titans are going away from natural grass and will install “cutting-edge field turf” in time for the 2023
NASHVILLE, TN・23 HOURS AGO