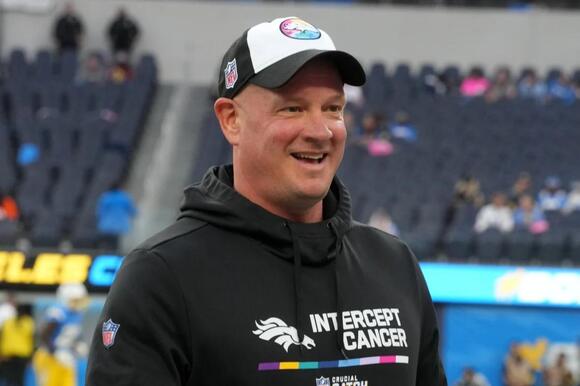 The Denver Broncos’ yielded all of three points in the first 59 minutes and 32 seconds of Sunday’s game against the Baltimore Ravens .

They were playing a team that had seen former NFL MVP Lamar Jackson go down to injury in the first half. Everything seemed primed for Nathaniel Hackett and Co. to come out on top for their fourth win of the season.

That’s when Denver’s defense allowed Ravens backup QB Tyler Huntley to drive down the field 91 yards on 16 plays, culminating in a game-winning touchdown with just 28 seconds remaining in the fourth quarter.

Russell Wilson did lead Denver down th field to the Ravens’ 45-yard line to set up a potential game-winning field goal from Brandon McManus. Unfortunately, his 63-yard attempt fell short en route to sending Denver to yet another loss and a 3-9 record on the season .

Leading up to this game, there had been rumors that Nathaniel Hackett’s job was not safe . He entered his first season as Denver’s head coach with high expectations following the blockbuster trade for Wilson. What followed has been a complete and utter dumpster fire in Mile High.

Denver scored all of nine points on Sunday, bringing its 12-game total to 166 points. The team is now averaging an NFL-low 13.8 points per game. Wilson seems to be a shell of his former self. All the while, these Broncos are wasting a defense that ranks in the top four in both points and total yards allowed.

Nathaniel Hackett should be one-and-done for the Denver Broncos

There’s several backdrops to this. First off, Denver’s new ownership group has no built-in relationship with Hackett. It also boasts deep pockets. This means that eating the remainder of Hackett’s contract wouldn’t be a huge thing.

Secondly, Broncos general manager George Paton will want to save face. His trade for Wilson is now looking like one of the worst deals for an individual team in NFL history. Wilson is also under contract on a five-year, $242.59 million deal that takes him through the 2028 season. Simply put, Denver can’t reasonably move off from Wilson until after the 2025 campaign due to the salary cap ramifications.

We’re not going to go as far to say that Hackett would be the fall guy in Denver. He’s made his bed with a terrible coaching performance.

What we do know is that this current iteration of the Denver Broncos is not cutting it. There’s very little that the organization can do to turn things around outside of washing itself of Nathaniel Hackett after just one season. Those who watched Denver’s most-recent loss agreed with this sentiment.

Quarterback Stetson Bennett IV will go down as one of the best quarterbacks in Georgia Bulldogs history, winning two national
ATHENS, GA・2 DAYS AGO
Sportsnaut

The Kansas City Chiefs are set to play in their fifth Super Bowl on Sunday and their third since 2019.
KANSAS CITY, MO・10 HOURS AGO
Sportsnaut

Houston Texans head coach DeMeco Ryans could be on the verge of making his first significant additions to the coaching
HOUSTON, TX・4 HOURS AGO
Sportsnaut

Matt Nagy returned to the Kansas City Chiefs coaching staff in 2022 after being fired as the Chicago Bears head
KANSAS CITY, MO・4 HOURS AGO
Sportsnaut

The Kansas City Chiefs and Philadelphia Eagles will be competing for the Lombardi Trophy on Sunday, but Super Bowl LVII
PHILADELPHIA, PA・5 HOURS AGO
Sportsnaut

Every year around this time, we hear several wild stories about various Super Bowl bets. Sometimes it’s something ridiculous, like
PHILADELPHIA, PA・2 DAYS AGO
Sportsnaut

Tom Brady states he will not start his broadcasting career with FOX Sports until the fall of 2024 after speaking to network executives last week.
OREGON STATE・4 HOURS AGO
Sportsnaut

If the massive divide between the Baltimore Ravens and superstar quarterback Lamar Jackson were to continue to be insurmountable, there
BALTIMORE, MD・2 DAYS AGO
Sportsnaut

Now that the Los Angeles Chargers have their face of the franchise, the top priority will be signing Justin Herbert
23 HOURS AGO
Sportsnaut

The Denver Broncos have not granted permission to the Minnesota Vikings to interview defensive coordinator Ejiro Evero for the same
DENVER, CO・2 DAYS AGO
Sportsnaut

Most of the focus heading into Super Bowl LVII between the Philadelphia Eagles and Kansas City Chiefs has been on
KANSAS CITY, MO・5 HOURS AGO
Sportsnaut

Sean Payton was officially introduced as the next Denver Broncos head coach after the team pulled off a blockbuster trade
DENVER, CO・3 HOURS AGO