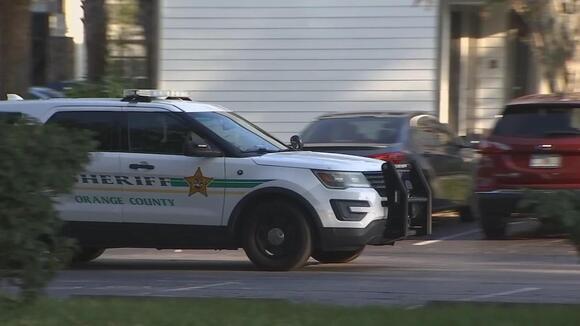 ORANGE COUNTY, Fla. — A 20-year-old man has died after being shot in Orange County, the sheriff’s office said.

Deputies said the victim was transported to a nearby hospital, where he was pronounced dead.

The suspect ran away from the scene before law enforcement officials arrived.

The sheriff’s office said they believe the suspect is in his 20s and knows the victim.

Witnesses told Channel 9 the victim lived in one of the buildings and deputies were searching for the suspect on a golf course in the neighborhood.

OCSO is still investigating the incident.

See a map of the scene below:

APOPKA, Fla. — Deputies have identified the man who was killed in a shooting along an Orange County roadway Monday evening. Investigators said 36-year-old Travis Rashard Grubs was found lying in the intersection of 10th Street and Central Avenue just after 9:30 p.m. Deputies said Grubs, who had been...
APOPKA, FL・9 HOURS AGO
WFTV Channel 9 Orlando

ORANGE COUNTY, Fla. — The Orange County Sheriff’s Office is investigating a shooting that left a young man dead Monday evening. Deputies were called to the 3000 block of Knightsbridge Road of of North Hiawassee Rd. just before 5:30 p.m. for reports of shots fired. See a map...
ORANGE COUNTY, FL・20 HOURS AGO
WFTV Channel 9 Orlando

ORANGE COUNTY, Fla. — Deputies in Orange County are investigating a deadly shooting. Deputies responded to a shooting at 11:10 p.m. Monday in the 300 block of Fairlane Avenue. Officials said two men, one in his 30s and another in his 20s, were found suffering from gunshot wounds. They...
ORANGE COUNTY, FL・10 HOURS AGO
WFTV Channel 9 Orlando

Deltona man accused of killing father, shooting at deputies to be in court Tuesday

LAKE COUNTY, Fla. — A man accused of killing his father before getting into a shootout with law enforcement will be back inside a courtroom Tuesday. Investigators said Jonny Santiago killed his father in Volusia County and dumped the body 30 miles away near Lake Avalon in Orange County last summer.
DELTONA, FL・8 HOURS AGO
WFTV Channel 9 Orlando

LAKELAND, Fla. — Ten people were injured in a shooting in Lakeland Monday afternoon in what appeared to be a targeted attack, police said. Officers responded around 3:45 p.m. to Iowa Avenue North and Plum Street. Of the nine victims, police said two have critical injuries and were shot in the jaw and face, respectively, and the other seven’s injuries were not life-threatening.
LAKELAND, FL・21 HOURS AGO
WFTV Channel 9 Orlando

Police: 10 people shot with 2 in critical condition in Florida

LAKELAND, Fla. — Ten people have reportedly been shot in Lakeland, Florida, police say. In a news release Monday evening, the Lakeland Police Department said that detectives are investigating a shooting near Iowa Avenue North and Plum Street. Officers were called out to the area just before 3:45 p.m.
LAKELAND, FL・20 HOURS AGO
WFTV Channel 9 Orlando

‘The system is flawed’: Inmate beaten by officers in viral video speaks out

ORLANDO, Fla. — Otis Miller has been in state prison for 22 years, serving a 45-year sentence for charges related to possession of cocaine within a thousand feet of a school. >>> STREAM CHANNEL 9 EYEWITNESS NEWS LIVE <<<. Prior to 2019, he was just one of 80,000 inmates,...
ORLANDO, FL・20 HOURS AGO
WFTV Channel 9 Orlando

ORLANDO, Fla. — The mother of a boy who died after a middle school rowing practice is now suing the rowing club. Langston Rodriguez-Sane died last year after a lightning strike in Lake Fairview in September caused a rowboat he was in to capsize. Rodriguez-Sane was one of four...
ORLANDO, FL・23 HOURS AGO
WFTV Channel 9 Orlando

POLK COUNTY, Fla. — A newborn baby was found, wrapped in a blanket, on a small hill in Polk County, deputies said. According to a news release, early Saturday morning, the Polk County Sheriff’s Office was called to Mulberry after someone reported hearing a baby crying outside. At...
POLK COUNTY, FL・2 DAYS AGO
WFTV Channel 9 Orlando

Lake County set to name station after firefighter who passed away

‘Man for all times’: Orange County Mayor Jerry Demings’ father passes away at 100

ORLANDO, Fla. — Orange County Mayor Jerry Demings announced the passing of his 100-year-old father, Freddie Lee Demings, on Tuesday. His family said Freddie Demings passed away peacefully. “He was known as a ‘man for all times’ for his laughter, smile, and wit. He will be deeply missed by...
ORANGE COUNTY, FL・4 HOURS AGO
WFTV Channel 9 Orlando

Chloe’s Law: What does it, and how does it protect motorists?

ORANGE COUNTY, Fla. — A man is fighting for his life after state troopers said he crashed into a retention pond. Crews managed to pull the car out, to the edge of the retention pond on North Alafaya Trail by the 408 exit. The 41-year-old driver remains in critical condition.
ORANGE COUNTY, FL・22 HOURS AGO