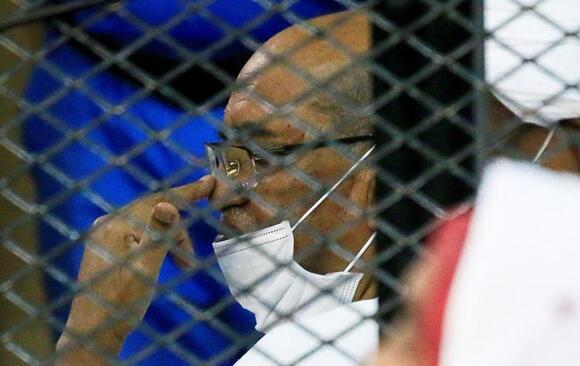 KHARTOUM (Reuters) - Former Sudanese president Omar al-Bashir has been moved from prison to hospital to complete some medical treatment, his lawyer Hashim Abu-Bakr said on Sunday.

The 78-year-old has been in custody while he is being tried over the 1989 coup that brought him to power. He was ousted in an uprising in 2019.

His lawyers had on Tuesday petitioned the court to transfer him to hospital, saying blood pressure and kidney issues posed a threat to his life if left untreated in prison.

ABUJA (Reuters) - Nigeria’s Supreme Court on Wednesday prevented the government from enforcing a Friday deadline for citizens to swap old banknotes for new ones, as the International Monetary Fund flagged disruptions to trade and payments.
5 HOURS AGO
RadarOnline

Vladimir Putin lost yet another top general in the latest blow to strike the Russian leader as his forces continue in their desperate struggle to take Ukraine, RadarOnline.com has learned.Major-General Dmitry Ulyanov, 44, was reportedly killed in a firefight with a Ukrainian sabotage group earlier this week.According to Daily Mail, Ulyanov’s death came shortly after the major general unretired from the Russian military to fight on the frontlines of Ukraine.Although Ulyanov previously served as a top paratrooper and commander of Russia’s elite 98th Guards Airborne Division, he was ordered to command a brigade of mobilized motorized infantrymen out of the...
20 HOURS AGO
Business Insider

China is mad at the US for blasting its suspected spy balloon, but a few years ago, state TV bragged its fighter pilots could shoot one down

One of the victims in the Idaho murders reportedly fought the attacker before she was killed. Sources close to the investigation told NewsNation that slain University of Idaho Xana Kernodle had suffered wounds to her fingers after “repeatedly grabbing” the knife from the killer during the 13 November attack. Kernodle’s boyfriend Ethan Chapin and her roommates Madison Mogen and Kaylee Goncalves were also murdered that night. Washington State University criminology PhD student Bryan Kohberger has since been charged with the slayings. Last week, the Goncalves family’s attorney Shanon Gray appealed a gag order in the case that he described...
IDAHO STATE・2 DAYS AGO
Reuters

AZAZ, Syria, Feb 6 (Reuters) - Syrian toddler Raghad Ismail was rushed to safety from the rubble of her home after it collapsed in a huge earthquake that has wreaked devastation in Syria and Turkey. But most of her family, including her mother, did not make it out alive.
2 DAYS AGO
Reuters

Feb 7 (Reuters) - Russia has demanded that the U.S. embassy in Moscow stop spreading what Moscow regards as fake news regarding its military operation in Ukraine and has threatened to expel U.S. diplomats, the TASS news agency reported on Tuesday.
20 HOURS AGO
Reuters

KYIV, Feb 8 (Reuters) - Ukraine will use all international legal mechanisms to try to bring Russian President Vladimir Putin to justice for the shooting down of Malaysia Airlines Flight 17 over east Ukraine in 2014, Prosecutor General Andriy Kostin said on Wednesday.
3 HOURS AGO
Reuters

ABOARD THE PAPAL PLANE, Feb 6 (Reuters) - Pope Francis has said some in the conservative wing of the Roman Catholic Church had exploited the death of the former pope, Benedict, in an unethical way for their own gains.
2 DAYS AGO
Reuters

Russia: U.S. has questions to answer over Nord Stream explosions

Feb 8 (Reuters) - Russia's foreign ministry said on Wednesday the United States had questions to answer over its role in explosions on the undersea Nord Stream gas pipelines last year.
1 HOUR AGO
Reuters

WASHINGTON, Feb 8 (Reuters) - The U.S. Treasury Department imposed sanctions on Wednesday on two members of the international criminal gang MS-13, accusing them of involvement in drug trafficking and murder in Central America and the United States.
WASHINGTON STATE・1 HOUR AGO
Reuters

ISTANBUL, Feb 8 (Reuters) - Criticism of Turkey's earthquake response mounted on Wednesday, with the political opposition and people in the disaster zone accusing the government of a tardy and inadequate relief effort.
2 HOURS AGO
Reuters

WASHINGTON, Feb 8 (Reuters) - The White House on Wednesday dismissed a blog post by a U.S. investigative journalist alleging the United States was behind explosions of the Nord Stream gas pipelines as "utterly false and complete fiction."
WASHINGTON STATE・1 HOUR AGO
Reuters

BRUSSELS, Feb 8 (Reuters) - Ukrainian President Volodymyr Zelenskiy will ask a summit of European Union leaders on Thursday for more arms to fight Russia and powering ahead with Kyiv's bid to join the EU, a senior Ukrainian official said on Wednesday.
2 HOURS AGO
Reuters

KARACHI, Pakistan, Feb 8 (Reuters) - Pakistan's government said on Wednesday it was not planning to hike fuel prices and warned oil companies against stockpiling petrol after some consumers complained they had been unable to purchase fuel at pumps.
2 HOURS AGO