CicLAvia returns to South Los Angeles; more than 7 miles of streets shut down to motorized vehicles 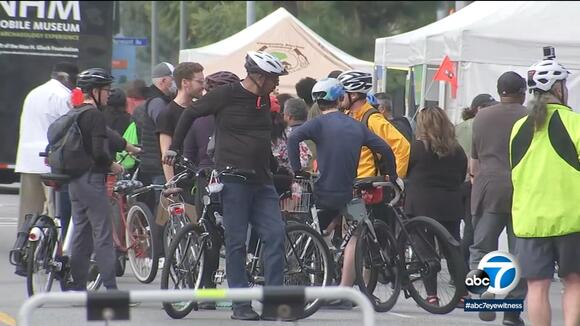 More than seven miles of streets in South Los Angeles were closed to vehicles Sunday for the year's final CicLAvia event, in which city officials encourage residents to explore what different neighborhoods have to offer on foot or via other modes of non- motorized transport. CicLAvia-South LA, which began at 9 a.m., was held along a 7.25- mile route from Exposition Park to Watts. It includes five hubs, beginning at Expo Park and also including the Historic South Central Hub, the Central Avenue Hub, the Florence Firestone Hub and the final hub in Watts near the 103rd Street/Watts Towers Metro Station. CicLAvia events have been held across Los Angeles since 2010. They are designed to reconnect residents with their neighbors and community while supporting local businesses and encouraging healthy outdoor activities. Previous CicLAvia events in 2022 were held July 10 at a different route in South Los Angeles, Aug. 21 in Hollywood and West Hollywood, and Oct. 9 in Downtown Los Angeles. More information is available at ciclavia.org . Copyright 2022, City News Service, Inc.

Skid Row artists are getting the opportunity to showcase their work at the Grove.
LOS ANGELES COUNTY, CA・6 HOURS AGO
ABC7

At least one person was killed Tuesday evening when a pursuit involving a stolen vehicle ended in a violent crash in Panorama City.
LOS ANGELES, CA・1 HOUR AGO
ABC7

The city of Monterey Park is thanking the firefighter-paramedics who helped save lives after the mass shooting - and apologizing for not recognizing the trauma they experienced.
MONTEREY PARK, CA・8 HOURS AGO
ABC7

A standoff at the Commerce Casino involving a man with a knife ended after about two hours with the man being transported to a hospital.
LOS ANGELES COUNTY, CA・11 HOURS AGO
ABC7

The Benedict Canyon homeowners association said this was the third time homicides have occurred at short-term rentals in their neighborhood in the past two-and-a-half years.
LOS ANGELES, CA・1 DAY AGO
ABC7

The suspect's accused of attacking another driver in a 2020 road rage incident in Hollywood. When his car was searched, he allegedly had steroids and cash.
LOS ANGELES, CA・4 HOURS AGO
ABC7

A suspect was arrested Monday evening for allegedly trying to squat inside a guest home in Beverly Hills, police say.
BEVERLY HILLS, CA・22 HOURS AGO
ABC7

The family of a man who was shot and killed by Culver City police filed a lawsuit alleging officers failed to provide timely medical care that may have prevented the death.
CULVER CITY, CA・25 MINUTES AGO
ABC7

At least three businesses in Long Beach were targeted in a string of break-ins, one of which was caught on camera. Now, owners are on high alert.
LONG BEACH, CA・1 DAY AGO
ABC7

A week after the slaying of 11 people at a Monterey Park dance studio, the neighboring city of Alhambra held a daylong Lunar New Year festival Sunday, including a special ceremony honoring the man who disarmed the Monterey Park gunman.
ALHAMBRA, CA・1 DAY AGO
ABC7

Students, activists and community leaders are not giving up their fight to close a metal recycling plant in Watts. Students at nearby Jordan High are concerned over dust, loud noise, contamination and projectiles.
LOS ANGELES, CA・6 HOURS AGO
ABC7

One person was arrested for suspicion of felony vandalism and was in possession of spray paint and a glass breaking tool after a protest in Hollywood.
LOS ANGELES, CA・2 DAYS AGO
ABC7

With the support of Mayor Karen Bass, the Police Commission has reappointed LAPD Chief Michel Moore to a second term - but he isn't expected to serve all five years.
LOS ANGELES, CA・4 HOURS AGO
ABC7

Police responded to five different gunman scares at Walmart locations in Los Angeles and Orange counties over the last three days, but they all turned out to be hoaxes.
ORANGE COUNTY, CA・1 DAY AGO