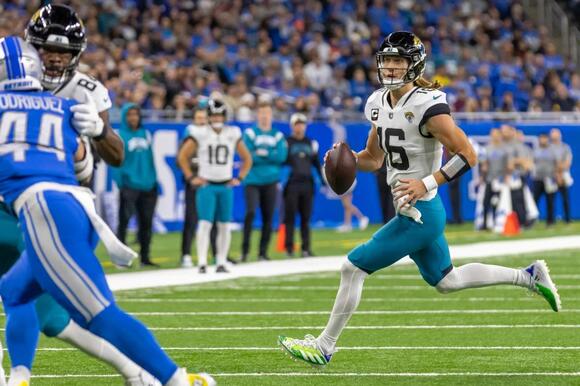 Jacksonville Jaguars quarterback Trevor Lawrence is just getting into a groove as his sophomore season plays out in Duval.

The former No. 1 overall pick entered Sunday’s game against the Detroit Lions having thrown six touchdowns without an interception over the past three games.

Unfortunately, Lawrence went down late in the second quarter of Sunday’s game in Detroit with an ugly-looking knee injury.

As you can see, Lawrence’s left knee was bent in an awkward situation as the quarterback was sacked by Lions defender James Houston. He went into the medical tent on the sideline before almost immediately heading to the locker room to be checked out.

At this point, there’s no further updates on Lawrence’s status outside of the fact that he was able to walk off to the locker room under his own power. That seems to be a pretty positive sign.

As noted above, Lawrence was finding his groove before going down to injury on Sunday. That included completing 29-of-37 passes for 321 yards with three touchdowns and zero interceptions in a surprising Week 12 win over the Baltimore Ravens.

We’ll have further updates on Lawrence’s status once more information becomes available. For now, we wish him the best.

Patrick Mahomes' wife, Brittany, wants all the smoke.  Brittany, who's never been afraid to speak her mind on social media, just posted a message for the Bengals.  Hint: It's not very friendly.  "Cancun on 3," she said on Twitter.  "Cancun on 3" has become a trendy phrase in the ...
CINCINNATI, OH・2 DAYS AGO
The Spun

It’s the sound of hearts breaking across Philadelphia and the state of Pennsylvania… and let’s be honest, everywhere else in the country, too. Eagles quarterback Jalen Hurts made a very rare public appearance with his girlfriend Bryonna “Bry” Burrows after the NFC Championship game this past Sunday, which is a surprise to many fans, as he is extremely private about his life outside of football.
PHILADELPHIA, PA・17 HOURS AGO
Yardbarker

The Pittsburgh Steelers and Philadelphia Eagles have been in the NFL since its inception. The two teams even briefly combined forces during World War II and called themselves the Steagles. The players and coaches didn’t like it then and the two fan bases don’t like each other now. Fans from the same state rarely get along and the vitriol was on display after the Eagles made their second Super Bowl in five seasons.
PHILADELPHIA, PA・1 DAY AGO
Sportsnaut

The San Francisco 49ers lost the NFC Championship Game on Sunday after injuries forced them to use a fourth-string quarterback.
SAN FRANCISCO, CA・1 DAY AGO
OnlyHomers

Once again, the Dallas Cowboys failed to make a deep playoff run as they fell short losing to the San Francisco 49ers 19-12 last Sunday in the divisional round of the playoffs. The elite offense of the Dallas Cowboys sputtered and struggled, which lead to Jerry Jones and head coach Mike McCarthy to make a tough decision.
DALLAS, TX・1 DAY AGO
Sportsnaut

The Denver Broncos wanted to make a splash when hiring their next head coach, and they have done just that. Sean Payton has reached an agreement to become the head coach of the Broncos, according to multiple reports. The Broncos have agreed to a compensation package with the New Orleans Saints, who previously held Payton’s... The post Sean Payton lands head coach job appeared first on Larry Brown Sports.
DENVER, CO・12 HOURS AGO
Sportsnaut

After five years as starting quarterback for the Baltimore Ravens, now Lamar Jackson’s contract is expired, and the former NFL
BALTIMORE, MD・14 HOURS AGO
Sportsnaut

The Indiana Pacers are quickly approaching the NBA’s trade deadline. And decision time has arrived on their direction for the
INDIANAPOLIS, IN・1 DAY AGO
Sportsnaut

Green Bay Packers quarterback Aaron Rodgers has yet to make a decision about playing in the NFL next season. Appearing
GREEN BAY, WI・13 HOURS AGO
Sportsnaut

Future Hall of Fame point guard Chris Paul is in the back end of his career. The Phoenix Suns star
PHOENIX, AZ・2 DAYS AGO