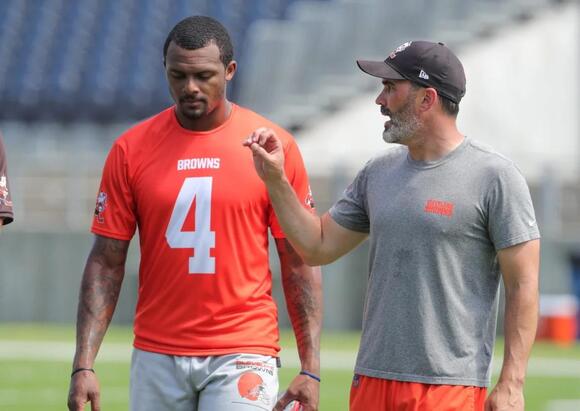 Back in 2020, Kevin Stefanski led the Cleveland Browns to an 11-5 record and a surprise playoff appearance. The rookie head coach was the toast of the city at that point.

Fast forward a couple years, and it appears that Stefanski’s job in Cleveland is not safe. The Browns entered Sunday’s action against the Houston Texans with a 4-7 record . Things did not start swimmingly for Deshaun Watson in his debut with the team, either.

All of this comes after the Browns posted a pedestrian 8-9 record during what was a drama-filled 2021 season for the team.

Could this potentially lead to Stefanski getting his walking papers following the 2022 campaign? NFL insider Jason La Canfora seems to think so. The veteran insider reported on Sunday that Stefanski’s name is one to watch on the hot seat.

Since a 2-1 start to the season, Cleveland has posted a 2-6 record. Even with Deshaun Watson having just made his debut with the team on Sunday following an 11-game suspension, that’s just not going to cut it.

Cleveland Browns could create a fall guy with Kevin Stefanski

General manager Andrew Berry exhausted multiple first-round picks and change to acquire Watson from the Houston Texans during the spring. He then handed Watson a fully-guaranteed five-year, $230 million contract .

These two moves were met with push back around the NFL after Watson was accused by north of 20 women of sexual misconduct. While the Pro Bowl quarterback was not charged criminally, his decision to settle a vast majority of those lawsuits didn’t paint the organization or quarterback in the best of lights.

Where does Kevin Stefanski fit into the equation here? Well, it’s rather simple. Cleveland’s brass could very well make the decision that Stefanski is not the man to lead Watson and Co. moving forward. Instead, the Browns find another offensive-minded head coach who could fit Watson’s skill-set.

While a lot will depend on the final month of the regular season , it’s clear that these Browns are going nowhere fast in 2022. With a number of interesting potential candidates potentially set to make waves this cycle, Stefanski’s future in Cleveland seems to be up in the air. And in reality, the Watson situation could prove to be a major backdrop here.

I believe they will give him one more season to get things right. This season was kinda a throw away because of the qb situation and that was not his fault

We can only hope. Those who follow the Browns closely realize that he’s not a head coach and an even worse offensive coordinator. How hard is it to give the ball to Chubb the best running back in the league? But Kevin thinks he’s smarter than everyone else. His record shows the opposite.

Should have been fired after the Thursday night Pittsburgh game last year. Disgraceful vengeance toward Baker in that game.

Myles Garrett is concrete evidence as to why players should never compete in the NFL Pro Bowl.  The Cleveland Browns star suffered a brutal injury during Sunday's Pro Bowl events.  Garrett has been diagnosed with a dislocated toe, per NFL insider Tom Pelissero.  "#Browns star DE ...
CLEVELAND, OH・1 DAY AGO
Sportsnaut

Houston Texans head coach DeMeco Ryans could be on the verge of making his first significant additions to the coaching
HOUSTON, TX・4 HOURS AGO
Sportsnaut

Kyrie Irving trade to the Dallas Mavericks: 4 winners and losers

It has happened. Kyrie Irving is a member of the Dallas Mavericks. Days after requesting a trade from the Brooklyn
DALLAS, TX・1 DAY AGO
Sportsnaut

The Sacramento Kings currently sit third in the Western Conference, ascending the NBA standings and in a position to end
SACRAMENTO, CA・1 DAY AGO
Sportsnaut

Dallas Mavericks trade for Kyrie Irving not official, 3rd team could get involved

The Dallas Mavericks’ blockbuster trade for star point guard Kyrie Irving is slated to be made official at some point
DALLAS, TX・1 HOUR AGO
Sportsnaut

While this year’s NBA trade deadline could be quieter than years past, the New York Knicks and Utah Jazz are
SALT LAKE CITY, UT・2 DAYS AGO
Sportsnaut

Tom Brady states he will not start his broadcasting career with FOX Sports until the fall of 2024 after speaking to network executives last week.
OREGON STATE・3 HOURS AGO
Sportsnaut

Like many teams in the Western Conference, the Portland Trail Blazers have flashed signs of being a playoff contender, but
PORTLAND, OR・2 DAYS AGO
Sportsnaut

Now that the Los Angeles Chargers have their face of the franchise, the top priority will be signing Justin Herbert
23 HOURS AGO
Sportsnaut

Sean Payton was officially introduced as the next Denver Broncos head coach after the team pulled off a blockbuster trade
DENVER, CO・3 HOURS AGO