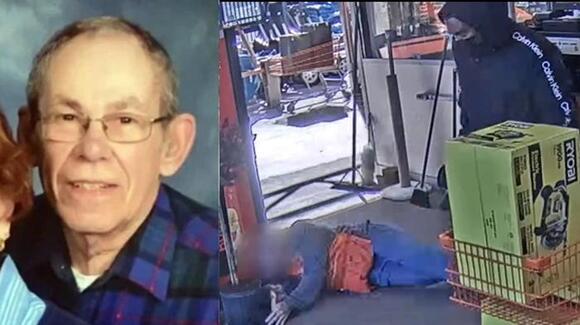 DURHAM, N.C. ( WNCN ) — Yovone Rasor said she and her husband had plans to retire, travel and visit family during the holidays – even see their new grandchild for the first time. But earlier this week, Yovone said she shared a final moment with her husband, Gary Rasor .

Police said Gary was shoved to the floor when he was working at a North Carolina Home Depot store back in October. He was taken to the hospital, but eventually succumbed to his injuries.

“It’s just hard, and I know it sounds silly, but I’m still waiting for him to come back home,” Yovone said through tears Saturday.

Hillsborough police said Gary confronted a man who was allegedly shoplifting on Oct. 18. Surveillance video at the business captured the moment Gary was shoved and hit the concrete floor.

The suspect can be seen walking away pushing a cart of stolen pressure washers, police said.

“He saw the video for the first time in the hospital, and he was very upbeat, wasn’t worried about anything until he saw that video. He lost it… he just lost it,” Yovone said.

“It’s just beyond our comprehension that someone would do this for a couple of power washers… that just is mind-boggling,” said Jeff Rasor, Gary’s son.

Gary, who lived with his wife in Durham, North Carolina, spent several days in the hospital, and even celebrated his 83rd birthday there.

“They said they were going to send him to rehab to heal,” Yovone said.

She said she never gave up hope that her husband would recover from his multiple fractures. She said the two bought plane tickets to visit family during the holidays.

Then, the day before Thanksgiving, Yovone said her husband was rushed to the ICU. She said he died days later.

Hillsborough police, who have called the suspect a “menace to society,” said the larceny is now being investigated as a possible homicide. On Friday night, police said Gary’s death was due to complications from the injuries he received in the incident.

Investigators said the suspect captured in surveillance video fled the store in a white, four-door Hyundai Sonata with a North Carolina temporary tag that was “obscured from witnesses.”

What a P.O.S !! Did your parents not teach you to Respect your Elders?! 😡 What a shame this world has become. Smh