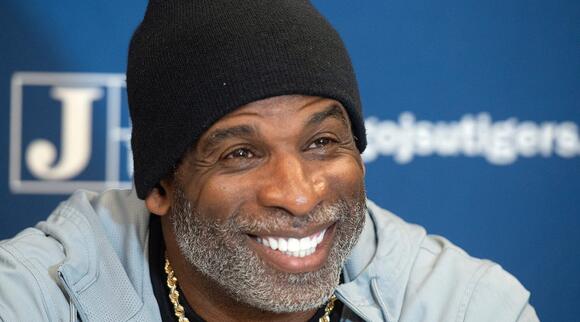 After just one night with the new program, a top recruit already has chosen Colorado because of its new coach.

Less than a day after Deion Sanders was announced as Colorado ’s new football coach, he already has landed a highly touted recruit. Four-star wide receiver Winston Watkins Jr. announced Sunday that he is committing to the Buffaloes.

The 2025 recruit hails from Fort Myers, Fla., just like Sanders. He’s one of the top wideouts in his class, a fact that signals Sanders’s presence in the Pac-12 already can be felt on the recruiting trail.

Watkins was previously committed to Texas A&M before pledging to Colorado on Sunday.

Sports Illustrated ’s Wilton Jackson reported that Sanders called a Jackson State team meeting following the Tigers’ victory in the SWAC title game Saturday to let his team know he was leaving, before Colorado officially made the announcement .

During an interview with On3 , Watkins was asked why he chose Colorado, and he wasn’t shy about his admiration for his new coach.

“Deion Sanders!” Watkins said. “He is the GOAT and will always be. He’s an amazing coach and can develop me as a player and person.”

COACHING IS A JOB, as with any other job, a better opportunity comes along, and you take it. That's it. Quit criticizing the man for something we do every day, choosing better.

Im sorry yall, I can work with many of yall for 3yrs at $12hr. If someone offers me a job doing the SAME thing at $25. IM GONE, your SELLOUTS & DISAPPOINTMENTS dont feed my family, keep my lights on, pay my mortgage or gas my cars

I hope Deion Sanders does good at Colorado. I think his momentum will carry over from Jackson State to Colorado. Go Coach Prime!

Danny Woodhead was among those who weren’t pleased with the calls in Sunday’s title game.
KANSAS CITY, MO・23 HOURS AGO
Sports Illustrated

This men’s season hasn’t been defined by the usual bluebloods. Plus, notes on the bubble, the Big 12’s dominance and more.
TENNESSEE STATE・1 DAY AGO
Sports Illustrated

The former Huskies quarterback has found a new home for the 2023 season.
SAN LUIS OBISPO, CA・1 HOUR AGO
Sports Illustrated

With tears in his eyes, the Cincinnati defensive end addressed what he was thinking on the play.
CINCINNATI, OH・1 DAY AGO
Sports Illustrated

The hiring comes after Denver fired Nathaniel Hackett after 15 games in his first season.
DENVER, CO・3 HOURS AGO
Sports Illustrated

Cameras caught what the two said to each other on the field after the AFC championship game.
CINCINNATI, OH・7 HOURS AGO
Sports Illustrated

The former Texans linebacker is reuniting with the franchise to become its next coach.
HOUSTON, TX・3 HOURS AGO
Sports Illustrated

The Chiefs tight end called the Cincinnati mayor a ‘jabroni’ after the team’s win.
CINCINNATI, OH・8 HOURS AGO
Sports Illustrated

Denver does not have a long-term solution at quarterback, has traded away future draft capital and may have expensive decisions ahead. That sounds a lot like New Orleans.
DENVER, CO・1 HOUR AGO
Sports Illustrated

The Pro Football Hall of Famer is adding another familiar face to his coaching staff with the Buffaloes.
BOULDER, CO・2 DAYS AGO
Sports Illustrated

Things got a bit testy in the final minutes of Sunday’s NFC championship game.
SAN FRANCISCO, CA・2 DAYS AGO