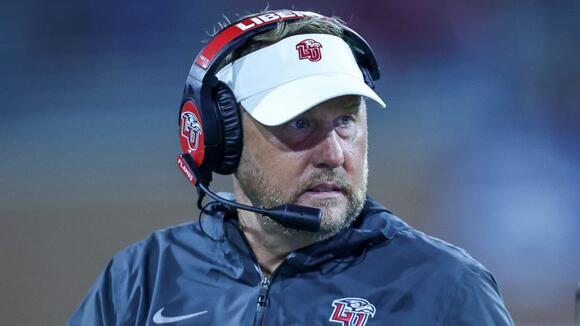 When 103.7 The Buzz "Morning Mayhem" host David Bazell offered former Arkansas and Ole Miss coach Houston Nutt a chance to decline after being asked on the morning radio show Wednesday morning for his thoughts on the hiring of Hugh Freeze at Auburn, Nutt wasted no time making it clear he had plenty to say.

For nearly a decade, Nutt and Freeze have had a volatile relationship akin to two bucks crossing paths during the rut.

Despite this, it appeared the current CBS college football analyst had moved on and was OK with Freeze getting an opportunity at Auburn.

"I'm all for second chances and third chances," Nutt said. "Whatever. That's fine."

It was easy to feel the past come bubbling up through the radio speakers and things definitely weren't fine.

Just prior to being asked directly about Hugh Freeze, Nutt indicated he didn't understand the hire as he mentioned Freeze without actually saying his name while addressing his confusion about coaches getting money and opportunity for losing.

"Auburn is gonna hire a guy who lost the last month," Nutt said. "You could tell when he started looking for jobs. He got beat by New Mexico State. He got beat by UConn, UConn got better, and Virginia Tech. It's a different world."

But now that he had been asked directly, the pain of how everything unfolded came pouring out.

Nutt recounted how he "got tired for about three years" of seeing his name come across the ticker on sports networks saying he had the majority of violations at Ole Miss, which turned out to not be true. Of the 21 violations Ole Miss faced, only four were attributed to Nutt's tenure.

The thing that got me was when I came home the last Sunday I came to Little Rock, my mom took the paper and opened up the page and she said 'They're saying that you have the majority of violations son?' And when your mother, it's one thing it goes across the ticker at ESPN, but when your mother asks you 'Son do you have the majority of violations?" I said 'Mom, I don't even have one violation.'"

"Thank goodness for Dr. Rex Thorne," Nutt said. "Rex Thorne gave me a number of Tom Mars and he is a Bulldog. He is 24/7 and he helped get things cleared up."

Less than a minute later, Nutt unleashed his sharpest jab at Freeze.

As for Auburn hiring a coach numerous fans loudly objected to for his accusations of inappropriate relations with female students while coaching at Briarcrest High School in Memphis, numerous calls to ladies of ill repute on his school phone while out traveling for Ole Miss and reports of unsolicited messages to a sexual assault survivor at Liberty, Nutt attributed it to a single word.

"Hugh Freeze did a good job at Liberty except for the last month and he beat Alabama," Nutt said. "Auburn to me is in a desperate mode. They're in a desperate mode and they had to feel like we've got to get somebody that can live in the same state as the greatest, Nick Saban, and who can beat him."

As for his true thoughts in summarizing the hire?

Freeze is a good coach and will do well at Auburn as long as he has players. Nut just upset because Freeze is a better coach than he is.

No Quick Answers for Razorbacks in This Spring Practice

There are plenty of questions, but nobody will KNOW until this fall.
FAYETTEVILLE, AR・16 HOURS AGO
All Hogs

Hogs get 20 points from Erynn Barnum, but fall on late three-pointer.
FAYETTEVILLE, AR・3 HOURS AGO
All Hogs

Razorbacks heading to matchup with No. 17 Baylor on Saturday afternoon.
FAYETTEVILLE, AR・10 HOURS AGO
All Hogs

Hogs' guard finds himself on most elite of lists
FAYETTEVILLE, AR・11 HOURS AGO
All Hogs

How '40 Minutes of Hell' Became an Iconic Arkansas Basketball Brand

Nolan Richardson's moniker that struck fear in the hearts of opponents was well earned, necessary
FAYETTEVILLE, AR・9 HOURS AGO
All Hogs

The Razorbacks are tied to the most dominant U.S. Basketball team of an entire generation as part of a basketball history that is nearly forgotten
FAYETTEVILLE, AR・2 DAYS AGO
All Hogs