One man was found dead and three others were hospitalized Saturday night in connection with an overdose incident in a Moreno Valley neighborhood, authorities said.

Deputies responded shortly after 7:30 p.m. to the 23800 block of Elyce Court, where one man was pronounced dead at the scene, according to the Riverside County Sheriff's Department. His identity was not immediately released. Three other men were transported to a hospital "for treatment of life-threatening injuries," a sheriff's news release said Sunday morning. "Early findings would indicate drugs are a factor in the death and we do not suspect foul play." News video from the scene showed paramedics loading patients into ambulances at the end of a cul-de-sac lined by single-story homes. The substance involved was unknown, authorities said in a previous statement. 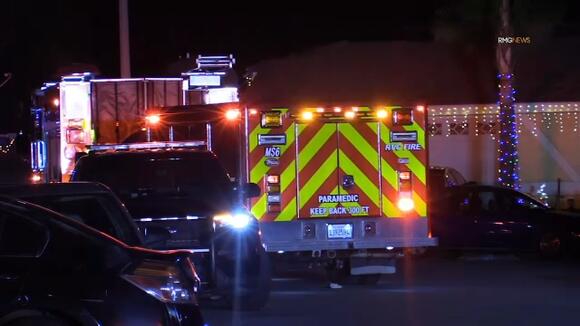 Emergency vehicles are seen outside a home in Moreno Valley after what authorities responded to an overdose incident on Dec. 3, 2022.

The sheriff's Overdose Death Investigations and Narcotics Unit assumed the investigation. Anyone with information about the incident is urged to call sheriff's Master Investigator Cornett at (951) 955-1700.

A 3-year-old boy has been found and his non-custodial mother arrested after she allegedly abducted him, prompting a search, Riverside police said.
RIVERSIDE, CA・35 MINUTES AGO
ABC7

A homeowner was shot at while confronting thieves near Victorville, and the terrifying moments were caught on video.
VICTORVILLE, CA・1 DAY AGO
ABC7

Police are seeking the public's help in identifying the man who brought a human jawbone into a San Bernardino station and left it there.
SAN BERNARDINO, CA・1 DAY AGO
ABC7

Man charged with murder after doctor struck by car, stabbed while on bike ride in Dana Point

A 39-year-old Long Beach man was charged Friday with murder in the killing of a bicyclist in Dana Point.
DANA POINT, CA・1 DAY AGO
ABC7

The family of Anthony Lowe, a disabled man shot and killed by Huntington Park police officers last week, is expected to file a lawsuit against the city.
HUNTINGTON PARK, CA・2 DAYS AGO
ABC7

Surveillance video from a nearby home shows a sedan striking a bicyclist at a Dana Point intersection before the driver allegedly exited the car and assaulted the victim, who later died.
DANA POINT, CA・1 DAY AGO
ABC7

The victim was attacked on the street and pepper-sprayed and her Maltipoo was stolen.
BELL GARDENS, CA・1 DAY AGO
ABC7

"We want some peace of mind." An Inland Empire family has been waiting five years for the trial of the man accused of killing a 37-year-old mother.
RIVERSIDE, CA・2 DAYS AGO
ABC7

A Huntington Beach police officer who died in a helicopter crash last year was honored Saturday with his own memorial highway sign.
HUNTINGTON BEACH, CA・11 HOURS AGO
ABC7

Two lifelong friends were identified as the two men killed when the driver of a stolen pickup truck slammed into their car in Panorama City while the suspect was fleeing from police.
LOS ANGELES, CA・3 DAYS AGO
ABC7

At least three businesses at a Lakewood shopping center were vandalized overnight, including a taco shop, whose owners said marks the third time in four years the restaurant has been targeted.
LONG BEACH, CA・13 HOURS AGO
ABC7

The audio of the 911 calls made in the moments after a gunman opened fire at a Monterey Park dance studio, killing 11 people and wounding 9 others, has been released.
MONTEREY PARK, CA・2 DAYS AGO
ABC7

A pregnant woman and a male accomplice strolled out of a Toluca Lake with a baby buggy priced at $1,599.
LOS ANGELES, CA・23 HOURS AGO
ABC7

Surveillance video shows a dognapping take a violent turn in Bell Gardens. Footage captures a woman attack another woman and then run away with her 1-month-old puppy.
BELL GARDENS, CA・3 DAYS AGO
ABC7

LAPD: No evidence of planned mass shooting by man found with cache of weapons in Hollywood high-rise

LAPD said there isn't any evidence that a mass shooting was planned by a man who stockpiled guns and ammunition in his Hollywood high-rise apartment.
LOS ANGELES, CA・2 DAYS AGO
ABC7

A restaurant run by the family of a Riverside County sheriff's deputy who was killed in the line of duty reopened to hundreds of supporters from around the community.
MURRIETA, CA・3 DAYS AGO