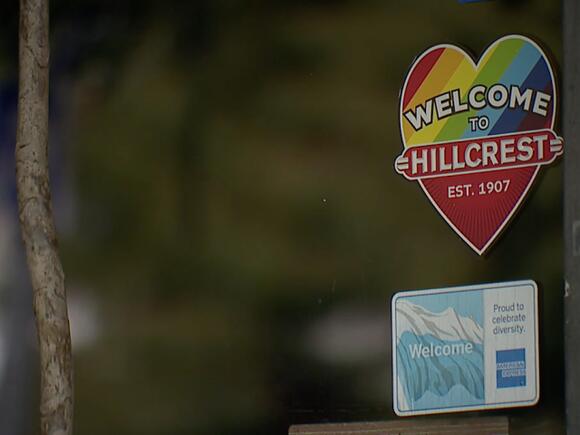 HILLCREST, Calif. (KGTV) – Hillcrest is widely known as a safe haven for the LGBTQ community, and now the city wants to make it a historic district. But some business owners think it needs to go further to preserve Hillcrest's culture.

"This neighborhood back in the 60s and 70s was a place that LGBTQ people because they felt safe," Benjamin Nichols / Executive Director of the Hillcrest Business Association, said.

Nichols says a lot of it had to do with the area's nightlife.

"People went to the bars and the restaurants, and they could be themselves in those environments," he said.

Nichols says the city is proposing to designate Hillcrest as a historic district - which would preserve the buildings - but he thinks otherwise.

"You really need to focus on preserving the things that made this neighborhood what it is rather than just trying to preserve old buildings," Nichols said.

She runs the Gossip Grill on University Avenue-one of only 24 queer woman-owned clubs in the U.S.

"We have so many folks that go to work as one person, change in their car, and come to us as their authentic self. It's things like that that we got to make sure we protect," Girton said.

For Girton designating Hillcrest as a cultural and entertainment district would allow her to expand live performances at her new restaurant.

She says she is very limited in what she can do.

"Like jazz bands or soul singers," she said. "We were denied that part because there's two nightclubs on the block. If we were a cultural entertainment district, we'd be able to do that."

On University Avenue alone, there are at least 10 LGBTIQQ-owned businesses. Some, like Rich's, have been here for decades.

Bedrosian says the designation would also protect businesses as more housing comes to the area and new neighbors who may complain about the vibrant nightlife.

"Park Boulevard used to have multiple nightclubs and LGBTQ retail stores, and restaurants, and now it's almost unrecognizable as a part of Hillcrest," he said. "There's no more clubs."

ABC 10News reached out to the city about designating the area as a cultural district and is still waiting to hear back.

A proposal to charge people to use public restrooms in the city of San Diego is receiving mixed reaction.
SAN DIEGO, CA・15 HOURS AGO
ABC 10 News KGTV

Before Tuesday, when you call 911, an ambulance and firefighters are automatically sent to you. But now, non-life-threatening calls will be triage nurses.
EL CAJON, CA・12 HOURS AGO
ABC 10 News KGTV

It's been a traumatic week for the Asian-American Pacific Islander community, but the recent mass shootings that have rocked our country aren't stopping many AAPI communities from celebrating.
SAN DIEGO, CA・3 DAYS AGO
ABC 10 News KGTV

A car led officers on a pursuit Monday night that ended in a crash in a La Mesa neighborhood, police said.
LA MESA, CA・16 HOURS AGO
ABC 10 News KGTV

The study—which was put together by Preply—found America's Finest City as the Ethiopian food capital of the entire country with a 4.8 rating.
SAN DIEGO, CA・1 DAY AGO
ABC 10 News KGTV

Nick Piazza is charged with inappropriately touching 3 children. One at a swim school, and the other two at private homes.
VISTA, CA・5 HOURS AGO
ABC 10 News KGTV

An 18-year-old man is in custody and faces a murder charge in connection with the death of a Chula Vista man whose body was discovered in Otay Valley Regional Park over the weekend.
CHULA VISTA, CA・18 HOURS AGO
ABC 10 News KGTV

As SDG&E bills are escalating around San Diego County, some residents are going on a "payment strike."
SAN DIEGO, CA・1 DAY AGO
ABC 10 News KGTV

The Bistro, located off of National Avenue, opened at the beginning of the month. It is completely operated by students with the California Culinary Arts Institute
SAN DIEGO, CA・4 DAYS AGO
ABC 10 News KGTV

County supervisors Wednesday unanimously approved upgrades to a popular hiking spot near the community of Ramona and the city of Poway.
SAN DIEGO, CA・6 DAYS AGO
ABC 10 News KGTV

A skydiver suffered a traumatic injury after his parachute failed to completely open and he struck the roof of a home and landed on the ground, the Oceanside Fire Department said Saturday.
OCEANSIDE, CA・3 DAYS AGO
ABC 10 News KGTV

You might notice more lights on the corner of Newport and Cable in Ocean Beach. It's a security measure that was funded by donors hoping to make the coastal community a safer place.
SAN DIEGO, CA・5 DAYS AGO