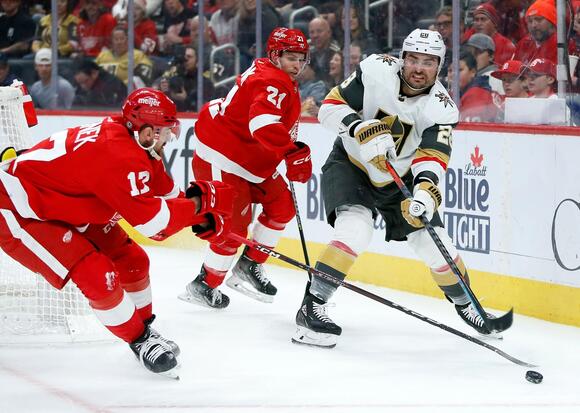 DETROIT — Jack Eichel scored just over a minute into the game as the Golden Knights never relinquished the lead in a 4-1 victory over the Detroit Red Wings on Saturday night.

Phil Kessel had a goal and an assist, while Jonathan Marchessault and Reilly Smith also scored as the Knights won for the second time in five games. Adin Hill made 24 saves to record his first victory in his last four starts.

“I thought that was a real responsible, professional road game,” coach Bruce Cassidy said. “We managed the puck, took advantage of some opportunities, bent but didn’t break in some spots, got a timely power-play goal, had some good kills late and got a few big saves.”

Eichel left early in the third period with an undisclosed injury. The Golden Knights are hopeful he won’t miss any games.

“If there’s one guy who wants to play in Boston on Monday, it’s Jack,” Cassidy said of Eichel, a Massachusetts native.

Oskar Sundqvist scored his third goal in two games, while Ville Husso stopped 21 shots for Detroit. The Wings lost in regulation for just the second time in eight games (4-2-2).

“Our margin of error is very thin against anyone,” Red Wings coach Derek Lalonde said. “It’s even less against these top teams.”

Eichel scored his 13th goal when he slipped unchecked next to the goal post and Chandler Stephenson backhanded a pass to him for an easy tap-in at 1:04.

The Knights and Detroit are among the three least penalized teams in the league and the first penalty wasn’t called until 7:16 of the second period, when Wings defenseman Jordan Oesterle was whistled for tripping. Marchessault cashed in with his ninth goal, lifting the puck from the right circle over Husso’s shoulder off a pass from Shea Theodore at 7:50.

The Red Wings also scored on their first power play as Sundqvist converted on a rebound off a shot by Dominik Kubalik with 8:23 left.

After serving out the next penalty, Kessel came out of the box and scored on a breakaway with 3:28 remaining in the middle period for a 3-1 Vegas lead. Kessel’s goal was the 17th of his career against Detroit in 31 games.

“We were on a power play and they get out of the box and get a breakaway.,” Larkin said. “Kessel’s going to make us pay and he did. That one hurts because we’re trying to tie it up.”
Smith added an empty-netter with 3 minutes left. Vegas had given up a one-goal lead in the third period against Pittsburgh in a 4-3 loss on Thursday.

“This was a big game for us after losing in Pittsburgh,” Hill said. “The guys were great in front of me and the forwards did a good job of getting the puck behind their defensemen, so when they did get the puck, they had to come 200 feet against us.”

Defenseman Shea Theodore could return for the Golden Knights this weekend when they hit the Big Apple for a back-to-back challenge.
LAS VEGAS, NV・1 DAY AGO
8 News Now

LAS VEGAS (KLAS) — Winless in two games on a four-game road trip, the Golden Knights face the New York Rangers on Friday at Madison Square Garden. The Knights, 0-1-1 on the their trip, lost their lone game against the Rangers this year, 5-1 at T-Mobile Arena on Dec. 7. Defenseman Shea Theodore and grinding […]
NEW YORK CITY, NY・16 HOURS AGO
8 News Now

Hamilton scored late to tie the game and netted a power-play goal with 1:06 left in overtime to lead the Devils to a 3-2 win over the Golden Knights on Tuesday night.
NEWARK, NJ・2 DAYS AGO
8 News Now

A man convicted for his part in a mass shooting at a Las Vegas hookah lounge could serve a little more than a year in prison as police continue to search for other shooters involved.
LAS VEGAS, NV・2 DAYS AGO
8 News Now

Ferrari Busby, 37, is accused in the beating death of Jashmine Wilson, 29, on Nov. 26, 2022. Wilson's sister said the last time she saw her sister was on the street in front of the family's apartment and she was talking to her Busby, her ex-boyfriend. When she checked outside later, they were gone and no one ever heard from Wilson after that.
LAS VEGAS, NV・18 HOURS AGO
8 News Now

A woman was arrested after stealing an RTC bus and using it to back into a Las Vegas police officer's motorcycle, an arrest report said.
LAS VEGAS, NV・1 DAY AGO
8 News Now

The National Transportation Safety Board released a preliminary report Thursday into the crash last year that killed 9 people, including several members of one family.
NORTH LAS VEGAS, NV・1 DAY AGO
8 News Now

A man accused of threatening to shoot a woman he allegedly held against her will later struggled with police officers over his gun inside a laundromat, documents said.
NORTH LAS VEGAS, NV・2 DAYS AGO
8 News Now

LAS VEGAS (KLAS) — A man was sentenced to six years in prison with the possibility of parole after two years for hitting and killing a teenager in front of his Henderson middle school while driving almost 100 mph. There were nearly 200 people in the courthouse to support Rex Patchett, including his family and […]
HENDERSON, NV・2 DAYS AGO
8 News Now

LAS VEGAS (KLAS) — A Las Vegas woman allegedly struck and killed a pedestrian before driving away, trying to clean evidence off of the vehicle, and speeding back through the crash scene, according to an arrest report. Joanna Meza, 19, is facing charges of reckless driving, failing to stop at the scene of an accident, […]
LAS VEGAS, NV・1 DAY AGO
8 News Now

The gold Trump International Hotel in Las Vegas inspires haters on Twitter enough to earn a spot in the Top 10 ugliest buildings in the world.
LAS VEGAS, NV・1 DAY AGO
8 News Now

Police said a man driving a vehicle was shot twice and then crashed into a wall near the intersection. According to police, the man's injuries appeared to be non-life-threatening.
LAS VEGAS, NV・1 DAY AGO
8 News Now

Police are searching for a missing 3-year-old boy last seen on Thursday morning. Legend Day-Shempert, 3, was last seen near the 3600 block of Cambridge Street near Maryland Parkway and Twain Avenue at approximately 10 a.m.
LAS VEGAS, NV・1 DAY AGO
8 News Now

A man who previously pleaded guilty to abusing and murdering his son refused to show up in court for his sentencing on Thursday morning.
LAS VEGAS, NV・1 DAY AGO
8 News Now

A federal judge has denied the City of North Las Vegas’ request to be removed from a lawsuit involving the overdose death of a former firefighter’s wife after what investigators called a drug-fueled party.
NORTH LAS VEGAS, NV・13 HOURS AGO
8 News Now