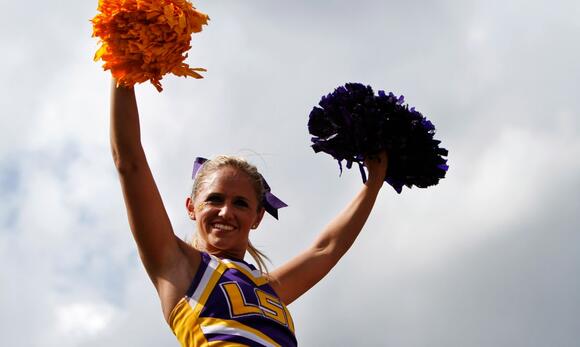 In the fall of 2014, the first-ever College Football Playoff became a reality, forever changing the sport.

But how does the system work in practice? Let's take a look at how the CFP selects the Top 25 rankings and the final four teams every football season.

"Composed of some of college football’s most decorated ambassadors," the 13-member CFP Selection Committee is charged with making the weekly Top 25 rankings starting in the middle of each season.

The top-four ranked teams are automatically eligible for the CFP semifinal.

In addition, the committee selects teams for each of the annual New Year's Six bowl games.

To start, every College Football Playoff selection committee member creates a master list of the 30 teams they think are the best in the country.

The committee will give consideration to any team that three or more members add to their lists.

At the end of any round of selections, members can add other teams to the group, provided at least three or more members agree.

Each successive round consists of two steps: "listing," and "ranking."

Each member lists what they feel are the six best college football teams, but not in any ranked order. The six teams that receive the most votes become the pool for the first step in the rankings.

This is when each selection committee member formally ranks the top-six teams from the listing step. The top-ranked team in each member's poll receives one point. The second-best team receives two points, the third-best three points, and etc.

4. Picking the next six

Each member of the selection committee then lists the six best teams left, in no certain order. Whichever three teams get the most votes are then added to the three teams held over for the next ranking step.

College Football Playoff selectors repeat the third and fourth steps until they seed 25 total teams. There are seven rounds of voting, each consisting of a listing step and a ranking step. Here's how the process looks for the entire Top 25 rankings system.

Members select teams ranked No. 1, No. 2, and No. 3 in the first round. The fourth -, fifth-, and sixth-ranked teams are slotted in the second round.

Between each step, the 13 College Football Playoff selectors will research and evaluate each team before voting.

After each round, selectors can re-consider any grouping of three or more teams if three members vote to do so.

They then repeat the third step to see if they have to make any adjustments.

The selection committee releases the official Top 25 College Football Playoff rankings every Tuesday starting in the second half of the season.

The top four teams as seeded by the selectors' process are eligible for the semifinal games.

Committee members meet and release the Top 25 rankings either six or seven times, depending on how long the season is.

College Football Playoff selectors create Top 25 rankings based on their evaluation of teams’ performance on the field. The committee employs several metrics to select the best teams.

Selectors are allowed to use a variety of advanced analytics to gauge teams' performance, but those numbers don't play a formal role in determining Top 25 rankings, which is a decision made by selectors' own judgement.

Comprised of 11 university presidents and chancellors, the board of managers creates, inspects, and approves the annual budget and policy for the College Football Playoff. It hires and fires officers of the company in charge of the Playoff, and has overall complete and final authority.

The CFP management committee is responsible for running the company every day. It performs many of the tasks that the board does not, but answers to the board for everything. This group consists of 10 athletic conference commissioners and the Notre Dame athletic director.

As the name implies, the selection committee is responsible for choosing the Top 25 teams each week starting in the second half of the season. And, most crucially, in selecting the Top 4 teams eligible for the College Football Playoff semifinal games.

"The selection committee is comprised of experts in college football, and they use their expertise in the deliberations," according to the Playoff's statement on the group.

This is the ninth year that college football has a playoff system, which replaced the former Bowl Championship Series (BCS) ahead of the 2014 season.

Here is a list of every CFP national champion.

It’s the sound of hearts breaking across Philadelphia and the state of Pennsylvania… and let’s be honest, everywhere else in the country, too. Eagles quarterback Jalen Hurts made a very rare public appearance with his girlfriend Bryonna “Bry” Burrows after the NFC Championship game this past Sunday, which is a surprise to many fans, as he is extremely private about his life outside of football.
PHILADELPHIA, PA・1 DAY AGO
College Football HQ

Former Georgia football star Stetson Bennett was arrested in Dallas over the weekend on a public intoxication charge, as first reported by WFAA. Now, a new video has surfaced of Bennett being released from the detention center in Dallas where he was held by police. You can see the video of his ...
ATHENS, GA・2 DAYS AGO
College Football HQ

Alabama has signed another top-flight recruiting class, the No. 1 group in the nation in 2023 according to our College Football HQ rankings and many others, but as ever, the question of NIL and its massive influence over the process continues to influence how things are done. Even so, Crimson ...
TUSCALOOSA, AL・2 DAYS AGO
College Football HQ

All of the Power Five conference have made it official now as the Big 12 has announced its full schedule for the 2023 college football season. And it's a historic schedule after the Big 12 welcomed four new members for the 2023 season after adding BYU, Cincinnati, Houston, and UCF. Each member of ...
COLORADO STATE・1 DAY AGO
College Football HQ

Georgia athletic department officials say the car involved in the crash that killed a football player and staff member was supposed to be used for recruiting purposes, not personal use. UGA said that personal use of the vehicle was prohibited. Georgia responds: "The car driven in the accident ...
ATHENS, GA・2 DAYS AGO
The Spun

HBCU program Albany State football coach Quinn Gray has pulled his former offer for quarterback Marcus Stokes and offered a public apology. Stokes was originally a pledge to Florida until a video of him singing song lyrics that contained the N-word went public. Florida pulled its offer at the time ...
ALBANY, GA・2 DAYS AGO
College Football HQ

Coveted assistant says no to Alabama, stays at Washington: report

Washington will keep its offensive coordinator in the 2023 football season after he got some serious interest from Alabama recently. Ryan Grubb will stay on with the Huskies to call offensive plays this coming season after meeting with Crimson Tide head coach Nick Saban, according to multiple ...
TUSCALOOSA, AL・1 DAY AGO