Liberty to name Jamey Chadwell as next coach 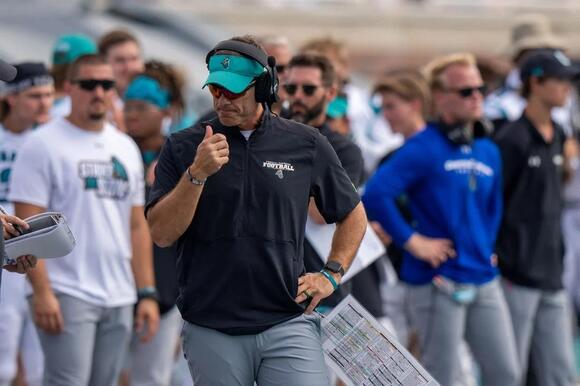 Per ESPN, Chadwell has agreed to a seven-year contract that averages more than $4 million per season.

He will replace Hugh Freeze, who accepted the position of head coach at Auburn.

Chadwell, 45, has compiled a 39-22 record during the past five seasons with Coastal Carolina. The Chanticleers finished this season with a 9-3 record after dropping a 45-26 decision to Troy in the Sun Belt championship game.

The Tampa Bay Buccaneers have several decisions to make this offseason after a disappointing 8-9 campaign. Obviously, the focus is
TAMPA, FL・2 DAYS AGO
Sportsnaut

Every year around this time, we hear several wild stories about various Super Bowl bets. Sometimes it’s something ridiculous, like
PHILADELPHIA, PA・1 DAY AGO
Sportsnaut

No. 3 Houston takes down Temple to avenge previous upset

Jarace Walker scored 23 points and No. 3 Houston unleashed its smothering defense in the second half to knock off
HOUSTON, TX・54 MINUTES AGO
Sportsnaut

Kirk Cousins connected with George Kittle on a 12-yard touchdown pass and scrambled away from a blitz to hit Minnesota
LAS VEGAS, NV・2 HOURS AGO
Sportsnaut

Stopping No. 5 Arizona star is tall task for Oregon State

There doesn’t appear to be any stopping Arizona’s Azuolas Tubelis as No. 5 Arizona goes for its sixth consecutive victory
TUCSON, AZ・2 DAYS AGO
Sportsnaut

While there is hope among the Denver Broncos organization that incoming head coach Sean Payton can fix the issues in
DENVER, CO・2 DAYS AGO
Sportsnaut

Vontae Davis, who played in the NFL for three teams from 2009 to 2018, was arrested in Florida on suspicion
HOLLYWOOD, FL・1 HOUR AGO
Sportsnaut

Taking tackling out of the equation did not prevent all injuries at the inaugural Pro Bowl Games. Cleveland Browns defensive
CLEVELAND, OH・2 HOURS AGO
Sportsnaut

Jim Boeheim said he “probably” will return to coach Syracuse for a 48th season in 2022-23. Boeheim, 78, discussed his
SYRACUSE, NY・7 HOURS AGO
Sportsnaut

While Philadelphia Eagles head coach Nick Sirianni has been tossed flowers from all around the NFL world for the job
PHILADELPHIA, PA・2 DAYS AGO
Sportsnaut

Michigan’s Hunter Dickinson too much for Ohio State

Hunter Dickinson scored 26 points and grabbed 11 rebounds to lead Michigan to a 77-69 win against Ohio State in
ANN ARBOR, MI・6 HOURS AGO
Sportsnaut

Boo Buie made two free throws with 31.0 seconds left Sunday to give Northwestern the lead for good as it
MADISON, WI・26 MINUTES AGO