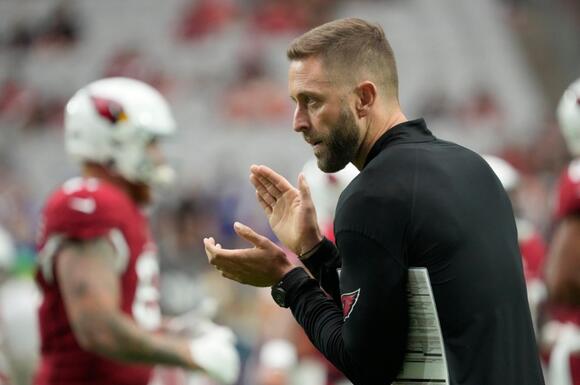 Kingsbury has been the subject of a myriad of podcasts, articles, tweets, shows, etc. after his football team is a mere 4-8 through 12 games. Kingsbury's play-calling and overall ability to lead the Cardinals has come under heavy fire just one season into a new contract extension.

Talk suggests Kingsbury could be shown the door, although nothing has leaked out of Arizona suggesting otherwise.

Still, those with any sort of knowledge will try their hand and make comments, and such was the case for Pro Football Talk's Mike Florio, who recently appeared on the Rich Eisen Podcast and offered his two cents on Kingsbury:

"Remember last year there was a lot of stuff swirling around Kingsbury, and then all of a sudden the team announces that he and [Steve] Keim have been extended through 2027, and we never heard a word about how much he's getting. How much is guaranteed.

"We don't know any of that stuff. That may have just been, 'Hey, we need to do something to put out this fire. I'm not prepared to make a major commitment. But we can say here's how long these contracts last even if they're not guaranteed maybe beyond 2024 or whatever the case may be."

Take Kyler with them. Start over and make a real successful football team. One AZ can be proud of instead of constantly make excuses for these three.

Watch: Lawrence Taylor Ranks One Quarterback Ahead Of Tom Brady On His All-Time List

With Tom Brady having announced his retirement last week — "for good" this time, he said — there has been plenty of discussion about where he fits among the all-time canon of NFL players. Most seem to view Brady as the greatest to ever play the game. His numbers certainly back that up, with seven ...
1 DAY AGO
All Cardinals

The Arizona Cardinals have one less person to choose from with their head coach search, as Brian Flores is reportedly taking the job as Minnesota Vikings' defensive coordinator.
MINNEAPOLIS, MN・2 DAYS AGO
All Cardinals

The Arizona Cardinals may be closing in on their guy, says Arizona Sports' John Gambadoro.
2 DAYS AGO
All Cardinals

The world of college basketball is mourning the loss of one of its own this week after it was reported that a member of the 1989 national title-winning Michigan Wolverines basketball team has died at the age of 53.
ANN ARBOR, MI・1 DAY AGO
All Cardinals

The Arizona Cardinals weren't able to land the talents of Sean Payton as their head coach, and perhaps we know why.
1 DAY AGO
All Cardinals

Why Cardinals are Taking So Long With Head Coach Search

Sports Illustrated's Albert Breer says the Arizona Cardinals have narrowed their list but also may not be done with interviews past this week.
TUCSON, AZ・2 DAYS AGO
All Cardinals

J.J. Watt, Dan Patrick Bicker Back and Forth on Kyler Murray

Arizona Cardinals (and pending free agent) OL Justin Pugh has a feeling on what the team will do with the No. 3 pick in the 2023 NFL Draft.
GEORGIA STATE・12 HOURS AGO
All Cardinals

The Arizona Cardinals are still unsure of their current predicament at head coach, which has led them to a cloudy future in regards to their coaching staff.
2 DAYS AGO