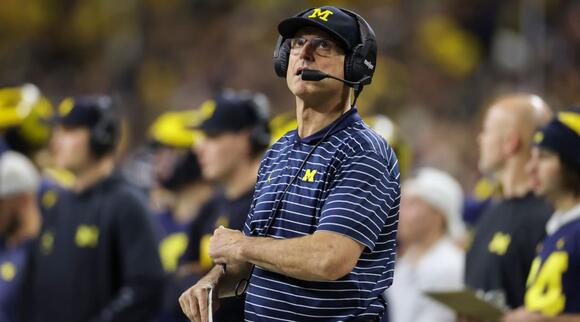 His success at Michigan has made him an intriguing target for professional franchises.

Although Jim Harbaugh shut down speculation about a return to the NFL after an interview with the Vikings last winter, teams around the league don’t seem ready to give up on pursuing the Michigan coach.

To wit, multiple NFL franchises have begun doing background work on Harbaugh, according to NFL Network’s Ian Rapoport and Tom Pelissero . One source told NFL Network that they believed Harbaugh would consider a return to the pros, while another said they thought he would discuss an opening if asked, before weighing the right situation.

Harbaugh, 58, is coming off of a second consecutive Big Ten championship as well as consecutive wins over Ohio State in The Game. Michigan is on the cusp of another trip to the College Football Playoff, due in large part to Harbaugh’s hitting his stride in recent seasons in Ann Arbor.

Harbaugh, who went 44–19–1 as the 49ers’ head coach from 2011 to ’14 and led the franchise to an appearance in Super Bowl XLVII, often is mentioned in conjunction with NFL vacancies, but little has come of the rumors. That changed last season when he interviewed for the Vikings’ head coaching job.

The Vikings interview was followed by Harbaugh having his contract reworked at Michigan. He’s now under contract through the 2026 season and is guaranteed to earn at least $7 million annually, with the potential to earn more in performance-based incentives.

“Ultimately, I decided this is where I wanted to be,” Harbaugh told reporters in March when addressing the re-structured deal and the Vikings interview. “And really, a lot of gratitude for that.”

It looks like Dak isn’t doing too bad after his playoff loss to the San Francisco 49ers NFC divisional round this past Sunday…. Dallas Cowboys quarterback Dak Prescott has a new lady in his life, Louisiana State University swimmer named Jadyn Jannasch (her Instagram profile picture features her wearing a Cowboys jacket as well):
LOUISIANA STATE・1 DAY AGO
Sports Illustrated

The Buccaneers fired six coaches after the season ended.
TAMPA, FL・2 DAYS AGO
Us Weekly

Jessie Lemonier, a former NFL linebacker, has died. He was 25. “We are shocked and saddened to learn of the passing of former Detroit Lion Jessie Lemonier,” the Detroit Lions wrote in a Thursday, January 26, in a statement shared via Twitter. “Jessie was a model teammate and wonderful young man who is gone far […]
FLORIDA STATE・1 DAY AGO
The Comeback

In case you missed it, the mayor of Cincinnati involved himself in the ongoing AFC Championship hype train on Friday. Mayor Aftab Pureval took several shots at the Kansas City Chiefs and quarterback Patrick Mahomes. The mayor then, in perhaps cringy fashion, claimed that Cincinnati Bengals quarterback Joe Burrow was Mahomes’ father. Not all were Read more... The post Patrick Mahomes’ wife sends clear message to Cincinnati Mayor appeared first on The Comeback: Today’s Top Sports Stories & Reactions.
CINCINNATI, OH・7 HOURS AGO
The Big Lead

Former Hornets owner Bob Johnson admitted that selling the franchise was one of his big regrets.
CHARLOTTE, NC・1 DAY AGO
Sports Illustrated

The cornerback was asked about a potential trade for the quarterback.
NEW YORK STATE・21 HOURS AGO
Sports Illustrated

The assistant coach spent one year with the Hurricanes.
CORAL GABLES, FL・22 HOURS AGO
Sports Illustrated

Five Black police officers were charged Thursday for fatally beating the 29-year-old, who was Black, during a traffic stop in Memphis on Jan. 7.
MEMPHIS, TN・14 HOURS AGO
Sports Illustrated

Art Rooney II discussed why he chose to keep the franchise’s play-caller heading into the ’23 campaign.
PITTSBURGH, PA・1 DAY AGO
Sports Illustrated

It turns out the Cowboys owner has big plans for Dallas’s future, and McCarthy apparently is a major part of it.
DALLAS, TX・1 DAY AGO
Sports Illustrated

All the news, notes, stats and records that were set during the 2022 fantasy football season.
22 HOURS AGO
Sports Illustrated

As they’ve cycled through quarterbacks, the 49ers’ top-ranked defense has remained a constant. It has everything to do with the man in charge of it and his younger self.
HOUSTON, TX・1 DAY AGO
Sports Illustrated

Significant changes are being made to the Dallas staff ahead of the 2023 season.
DALLAS, TX・1 DAY AGO
Sports Illustrated

Paolo Banchero Has Been a Revelation, Plus the Biggest Surprise Rookie

Examining the play of a few notable members of the 2022 NBA draft class.
WISCONSIN STATE・1 DAY AGO
Sports Illustrated

Sean Payton Shuts Down Report About How His Broncos Interview Went

Report: Warriors Could Be at Risk of Losing GM Bob Myers