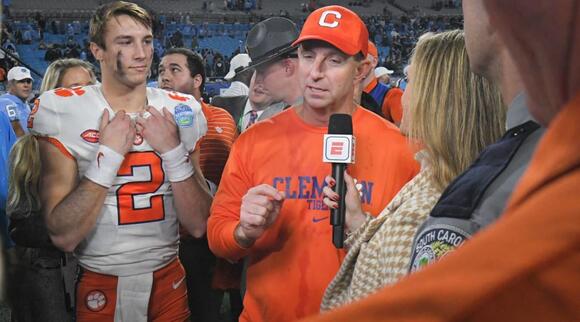 The Tigers coach confirmed the freshman will start moving forward.

Clemson ’s ACC Championship Game victory on Saturday night came with some quarterback drama, as backup Cade Klubnik relieved D.J. Uiagalelei after just two offensive series. Klubnik went on to control the game, throwing for 279 yards and a touchdown and rushing for 30 yards and another touchdown in the Tigers’ 39-10 win over North Carolina.

After the game, head coach Dabo Swinney confirmed that Klubnik would start at quarterback for the Tigers (11-2) in the Orange Bowl.

“Things have to happen the way they’re supposed to happen, and tonight, that’s the way it went, and Cade was ready,” Swinney said, via ESPN’s Andrea Adelson . “You got a chance to see what he can do. He played in rhythm, guys made plays for him. He’s really, really fast. He can really make plays with his legs. It was a great night and a glimpse of our future and what it looks like at Clemson.”

The freshman Klubnik joined Clemson this year as one of the top recruits in the country, but he has spent the majority of the season backing up Uiagalelei. Although Uiagalelei has recorded a solid year with 2,521 passing yards, 22 passing touchdowns, 545 rushing yards and seven rushing touchdowns, he struggled in last week’s loss to South Carolina, which might have cost Clemson a spot in the College Football Playoff.

Uiagalelei has one year of eligibility left, but it appears as if Clemson is ready to hand the team over to Klubnik. Swinney didn’t go into detail regarding Uiagalelei’s future with the program.

“So moving forward, I’m sure there’ll be plenty of conversations,” Swinney said. “Obviously, it didn't end tonight the way he would like, but he’s got a bright, bright future as a football player.”

Pitt’s Jason Capel Rants About 'Disrespect' After Win Over UNC

The assistant coach, who played at North Carolina, was fiery after the Panthers pulled off an upset win in Chapel Hill.
CHAPEL HILL, NC・1 DAY AGO
Sports Illustrated

The Dallas owner shared his opinion on the top signal-caller in Mobile this week.
DALLAS, TX・1 DAY AGO
Sports Illustrated

Cameras caught what the two said to each other on the field after the AFC championship game.
CINCINNATI, OH・2 DAYS AGO
Sports Illustrated

They seem to be sick of people talking about it already.
1 DAY AGO
Sports Illustrated

The greatest quarterback of all time always knew how to make the correct decision on the field. So it's no surprise that he ended his career at precisely the right moment.
MICHIGAN STATE・1 DAY AGO
Sports Illustrated

The hiring comes after Denver fired Nathaniel Hackett after 15 games in his first season.
DENVER, CO・2 DAYS AGO
Sports Illustrated

Kansas City will lean on these six players to lead the charge in the biggest game of the year.
KANSAS CITY, MO・21 HOURS AGO
Sports Illustrated

Jalen Hurts Has Perfect Answer on Best Play of Season

The Eagles quarterback has had plenty of highlight reel moments this year and now sit one victory away from being a Super Bowl champion.
PHILADELPHIA, PA・2 HOURS AGO
Sports Illustrated

The Raiders quarterback will get the chance to have his Las Vegas swan song this upcoming weekend.
LAS VEGAS, NV・2 DAYS AGO
Sports Illustrated

The five-star recruit previously committed to Florida before being released.
TEMPE, AZ・1 DAY AGO
Sports Illustrated

Despite longstanding negotiations, the two programs have hit a snag in their plan to make an earlier departure from the Big 12.
NORMAN, OK・1 HOUR AGO
Sports Illustrated

Chargers owner Dean Spanos described him as ‘one of a kind’ and ‘one of the best judges of football talent in NFL history.’
WASHINGTON STATE・1 DAY AGO
Sports Illustrated

Players With Most Career NFL Games But No Super Bowl Appearances

These players all had long, successful careers, but never made it to the big game.
WASHINGTON STATE・15 HOURS AGO