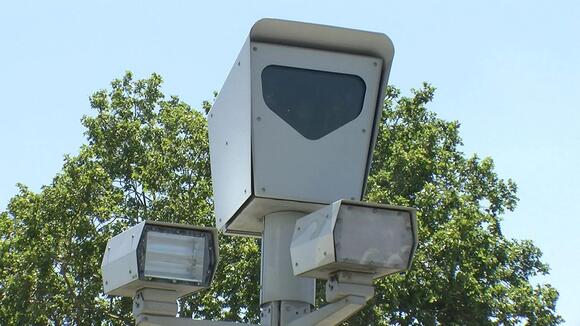 SACRAMENTO COUNTY, Calif. (KTXL) — Running a red light —any red light— is illegal and can lead to fines in the hundreds of dollars, and at 26 intersections in the Sacramento area, cameras are in place to catch drivers that do so.

The red-light cameras throughout the city and county are used to help police enforce traffic laws and automatically photograph vehicles and drivers who run red lights.

According to the city of Sacramento, more than 50% of the 4,000 accidents that occur in the city take place at traffic signals.

The city said that the red-light system is connected to each traffic signal and uses cameras and sensors in the pavement to detect when someone runs a red light.

The cameras are constantly monitoring traffic signals and the camera takes a photo as a car reaches the intersection and drives over the sensors “faster than a preset minimum speed and at a specified elapsed time after the signal has turned red.”

The city says that a second photo is then taken that shows the driver in the middle of the intersection.

The camera also records the date, time, time since the light turned red, and the vehicle’s speed.

After the photo is reviewed, tickets are then sent by mail to the vehicle’s owner as well as instructions on how to identify the driver who was in the vehicle at the time of the infraction.

According to the City of Sacramento , the following intersections within the city have red-light cameras:

According to the City of Sacramento, all red-light cameras are managed by the Sacramento County Sheriff’s Department.

The Sheriff’s Department also shared a list of the red-light cameras at intersections in Sacramento County.

While this list was last updated in 2015, Sacramento County Sheriff’s Office confirmed with FOX40 News that the following intersections are accurate as of December 2022:

Ok here we go again. I understand saving lives, but just another hustle for the city and state. Drive careful people, no rush to get anywhere

(KTXL) — Officers from the Sacramento Police Department are investigating a homicide near North Natomas, according to the Sacramento Police Department. •Video Above: Winter storm hits the Sierra Police said that officers were investigating in the 1800 block of Club Center Drive Sunday morning. According to police, when officers arrived on the scene they found […]
SACRAMENTO, CA・23 HOURS AGO
FOX40

UPDATE FEB. 6 1 P.M.: Sacramento Police advised that the missing teenager had been ‘safely located.’ (KTXL) — Sacramento Police are asking for the community’s help in locating a teenager that went missing in early February. •Video Above: Sacramento weather forecast On Feb. 3, police announced that they are searching for 13-year-old Kylie Vang, who […]
SACRAMENTO, CA・1 HOUR AGO
FOX40

Pedestrian killed in crash in Yuba County; owner of vehicle turns self in

(KTXL) — One person was killed after being hit by a car in Yuba County early Monday morning, the Yuba County Sheriff’s Office said. Video above: One person pulled from structure fire in Carmichael According to the California Highway Patrol, two pedestrians were walking north along a southbound lane of Forty Mile Road near State […]
YUBA COUNTY, CA・35 MINUTES AGO
FOX40

UPDATE Feb. 6 1:10 p.m.: One day after being reported missing, a woman has been ‘safely located,’ Sacramento Police said. The Sacramento Police Department announced on Feb. 5 that they were searching for a missing woman considered ‘at-risk’ who has been missing since Sunday, Feb. 5. •Video Above: 10-year-old dies after being shot in a […]
SACRAMENTO, CA・1 HOUR AGO
FOX40

These are the food banks in the Sacramento region

(KTXL) — Community food banks have long been a way for those in need to get assistance with receiving enough healthy food to feed themselves and their families. •Video Above: California to send gas bill credits early Food banks receive, store, and distribute food, sometimes directly and sometimes by distributing food to local groups that […]
SACRAMENTO, CA・1 DAY AGO
FOX40

(KTXL) — One man died and two other men were injured in a Stockton shooting that occurred late Saturday night, according to the Stockton Police Department. — Video Above: Winter Storm hits the Sierra According to the police department, officers received reports of a shooting at a business in the 400 block of W. Weber […]
STOCKTON, CA・1 DAY AGO
FOX40

(KTXL) — Tyre Nichols may soon have a skate park named after him in Sacramento.  According to Tim Swanson, media and communications manager for the city of Sacramento, city officials are working with Nichols’ family to honor him. Renaming a skate park after him may be a part of that.  “Councilmember Lisa Kaplan, with support […]
SACRAMENTO, CA・2 DAYS AGO
FOX40

(KTXL) — If confirmed by the Senate, the California Highway Patrol’s new commissioner will be a CHP veteran from Sacramento County. Gov. Gavin Newsom’s office said he appointed Sean Duryee, 48, of Galt to the position on Friday. Duryee has been with the CHP since 1998.  •Video Above: Voters will determine if they will also […]
CALIFORNIA STATE・2 DAYS AGO
FOX40

The Latest — Friday, Feb. 3: 2:45 p.m. On Friday, the Sacramento County Coroner’s Office identified the victim as Amarjit Sanghera, 53, of Elk Grove. Original Story Below: (KTXL) — The California Highway Patrol said a person died while trying to cross Highway 99 in South Sacramento Thursday evening.  According to the CHP, the person […]
ELK GROVE, CA・3 DAYS AGO
FOX40

(KTXL) — On Thursday, Sacramento County Sheriff and Elk Grove Police officials released more details on their respective investigations of the killing of a woman in Rancho Cordova that led to the pursuit of the suspect in Solano and Sacramento County before officials shot the suspect in Elk Grove. Where did the investigation begin? Rancho […]
ELK GROVE, CA・3 DAYS AGO
FOX40

I-80 in Placer County reopened after fatal collision

(KTXL) — A fatal collision along westbound I-80 on in Placer County on Saturday has forced a closure of the freeway, according to California Highway Patrol Auburn. CHP said that all westbound lanes and the number one eastbound lane have been closed and there is not current estimated time of reopening. – Video above: Travelers […]
PLACER COUNTY, CA・2 DAYS AGO
FOX40

(KTXL) — A Stockton Police officer who was under investigation by the San Joaquin County District Attorney’s Office is no longer an employee of the Stockton Police Department. — Video Above: Pursuit of Rancho Cordova homicide suspect ends in shooting According to the police department, Ny Tran was arrested in November 2022, for the suspicion […]
STOCKTON, CA・3 DAYS AGO
FOX40

(KTXL) — The City of West Sacramento is expanding its free rides program from last summer.  Starting Feb. 1 and continuing through the end of the year, residents in West Sacramento can get free rides that begin or end in the Broderick or Bryte neighborhoods.  •Video Above: Family questions why roller coaster is in use […]
WEST SACRAMENTO, CA・4 DAYS AGO
FOX40

(KTXL) — The person suspected of killing a woman in Rancho Cordova led officers on a chase to Elk Grove, according to the Sacramento County Sheriff’s Office.  The homicide investigation is concentrated on Ramsgate Way, near Mather Field Road, and officials responded around 1 p.m. The 18-year-old woman was pronounced dead at the scene, the […]
RANCHO CORDOVA, CA・4 DAYS AGO
FOX40

(KTXL) — A collision in Woodland has knocked out power for more than 2,000 residents, according to the Woodland Police Department. – Video above: Sacramento International Airport announces expansion The collision happened in the area of East Beamer Street and Harter Avenue when a vehicle collided with a power pole. Traffic on westbound East Beamer […]
WOODLAND, CA・4 DAYS AGO
FOX40

(KTXL) — A new armored vehicle will be added to the Sacramento Police Department’s fleet with a 7-to-2 vote in favor from the Sacramento City Council on Tuesday night. The ‘Rook’ is a tactile vehicle built by Ring Power based on a Cat Compact Track Loader chassis and features level-4 armor capable of taking up […]
SACRAMENTO, CA・5 DAYS AGO
FOX40

(KTXL) — The Crocker Art Museum has been a Sacramento staple since the late 1800s, showcasing permanent and rotating collections of art.  According to the National Archives, the Crocker Art Museum was donated to the city of Sacramento in 1885 and is the “oldest state or municipally owned art gallery west of the Rocky Mountains, […]
SACRAMENTO, CA・1 DAY AGO
FOX40

(KTXL) — On Saturday, Sacramento Regional Transit will be honoring Rosa Parks, the civil rights activist known for her role in the Montgomery, Alabama bus boycott. — Video Above: New poll on top issues facing Californians SacRT will be “reserving” a seat on all buses on Saturday. Riders can also ride the SacRT Light Rail […]
SACRAMENTO, CA・3 DAYS AGO