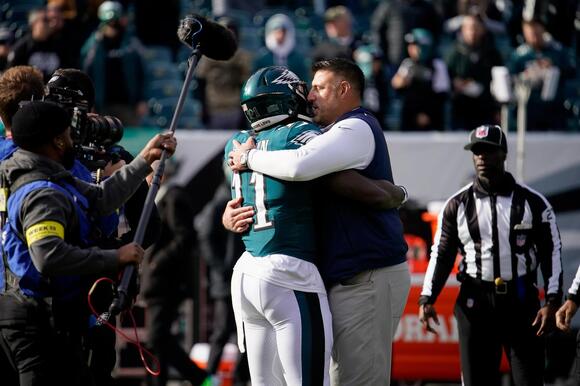 The Tennessee Titans face off against one of their most notable cast-off stars in a battle between two playoff contenders.

The Titans (7-4) visit the Philadelphia Eagles (10-1) at Lincoln Financial Field on Sunday (noon, Fox). Though the matchup pits two division leaders against one another, the main story on Titans' fans minds will be the battle against Eagles receiver A.J. Brown, who the Titans traded to Philadelphia in April after they were unable to come to terms with a contract extension to keep the receiver in Nashville.

Brown has 53 catches for 831 yards and seven touchdowns this season. All Titans wide receivers have combined for three touchdown catches this season.

WHY IT HAPPENED: The NFL economics that poisoned A.J. Brown's talks with Tennessee Titans

THE FALLOUT: Just so you know, the Tennessee Titans aren't mad at AJ Brown. This is why | Estes

Follow below for live updates as the Titans take on the Eagles.

What time, TV channel will Titans vs. Eagles be?

Kickoff is scheduled for noon CT. The game will be televised on Fox.

Malik Willis did get the final two drives at QB for the Titans. Jacksonville next week.

9:32 left: Gardner Minshew in the game at QB for the Eagles.

9:52 left: Ryan Tannehill is back in the game. He is rushed on third down and throws into the ground, incomplete.

That should have been a Malik Willis drive.

11:44 left: Titans jump offside on a field goal try, so the Eagles go for it on a 4th and short. QB sneak is successful.

14:34 left: There's the first QB sneak of the day for Jalen Hurts on 4th and short. It's becoming a famous part of the Eagles offense.

End of the third quarter: Eagles will have 3rd and 6 from the Titans' 20 on the other side.

7:05 left: Ryan Tannehill sacked for a sixth time. Quite a few Eagles there to pile on. Titans offensive line has struggled mightily today.

A.J. Brown's second TD of the day puts Eagles up 18

Brown caught if off the left shoulder of Titans DB Tre Avery. Kristian Fulton has not returned to the game, questionable to return with a groin injury.

12:56 left: Eagles punt return to midfield, then a couple pass completions move Philly's offense to the Titans' 35. Danger zone for the Titans here.

14:07 left: Ryan Tannehill sacked. Titans three and out to start the second half. Scheduled post each week it seems.

HALFTIME: Titans down 21-10 but do get the ball to start the second half. They'll need a score out of the half to keep up with Jalen Hurts and the Eagles offense.

Another bad running first half for the Titans. Derrick Henry has 21 yards on seven carries.

1:28 left : Tre Avery pass interference on A.J. Brown sets the Eagles up with 1st and goal from the Titans' 6.

Daley jumped early on 3rd and 1 seconds before. Not his best sequence.

Titans into the red zone.

Eagles have been hampered by five first-half false starts.

10:41 left: Bud Dupree roughing the passer penalty extends the Eagles' drive. Dupree led with his helmet on the hit to Jalen Hurts. Second personal foul on a hit on Hurts on this drive.

A.J. Brown gets his first TD vs. Titans on his second try

13:55 left : Now that is an A.J. Brown touchdown catch. Brown is W I D E open on a double move. Kristian Fulton, who tried to stand in Brown's way on the double move, was run over and stayed on the ground. Fulton was called for illegal contact.

14:03 left: A.J. Brown is ruled to have scored on a tight-rope catch down the right sideline, but the replay shows his right foot comes down out of bounds.

14:55 left: Mike Vrabel challenges a short DeVonta Smith catch along the sidelines, and he wins it. Incomplete.

1:49 left: Quez Watkins, working against Roger McCreary, has a 16-yard catch across the middle to jumpstart this Eagles drive.

Treylon Burks has 1st NFL TD catch, but is injured

Burks walks off after a few moments on the ground.

4:53 left: Titans going for it on 4th and 7 from the Eagles' 40, and Ryan Tannehill lunges past two Eagles defenders for a first down scramble.

6:57 left: Titans get their first first down of the day on a Josh Sweat offside penalty.

8:26 left: Jalen Hurts throws low to DeVonta Smith on third down. Eagles punt. Smith had a lot of room with a decent throw.

Eagles on the board with a DeVonta Smith TD

12:03 left: Jalen Hurts to DeVonta Smith for a 34-yard touchdown strike over the middle.

A.J. Brown vs. Kristian Fulton looks to be a matchup, but if Roger McCreary and company struggle against the 2020 Heisman Trophy winner, it's going to be a long day for the Titans defense. Titans pass rush also failed to make an impact on the opening drive.

Pregame: Ben Jones in, Denico Autry out for Titans

The Titans will have center Ben Jones (concussion) back in the lineup after missing the last two games. Jeffery Simmons is also active after being questionable.

Denico Autry (knee) and Hassan Haskins (hip) are among today's inactives. Eagles DB C.J. Gardner-Johnson was ruled out earlier in the week.

Jeff Fisher stepped down from his third professional football head coaching position Friday when he resigned as coach of the USFL's Michigan Panthers. The former Tennessee Titans coach, who still lives in the Nashville area, helped the league make its return after a 40-year hiatus when he was named coach and general manager of the Michigan franchise. He led the Panthers to a 2-8 record.
NASHVILLE, TN・1 DAY AGO
The Tennessean

The Tennessee Titans still have an offensive coordinator opening. They are not alone. There are still 10 offensive coordinator jobs unsettled as of Feb. 1. That's a lot with a month to go before the NFL Combine and the start of free agency. For teams like the Titans and Commanders,...
NASHVILLE, TN・2 DAYS AGO