FadeawayWorld.net provides the top news, rumors and highlights across the NBA. 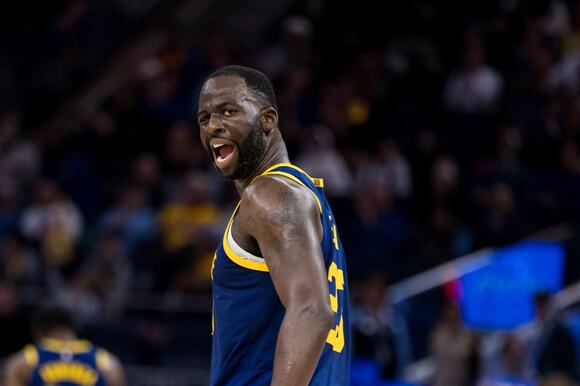 Draymond Green was linked with the Los Angeles Lakers, but he shut down all speculations that said he would suit up for the Purple and Gold.

NBA fans shared their two cents after Draymond Green quashed rumors of him becoming a Laker.

Green's future with the Golden State Warriors was one of the major topics of discussion throughout the offseason. There was more spice added to the story after his locker room dustup with Jordan Poole .

In a recent interview with Andscape's Marc J. Spears , Green shot down the speculations that did the rounds, saying he never said that.

And while that affirmed that his loyalty lies with the Warriors, much depends on how the front office looks at his contract.

At the time of writing, he remains under contract with the franchise for this season on a $25.8 million pay and has a $27.6 million player option next season.

The same interview also saw him add that it was business, and his primary focus was on winning.

It's not exactly been a humdinger season for the Warriors. They have been battling inconsistency throughout the edition , and for Green, it was all about looking at the task at hand.

"I do understand that this is a business. And ultimately, decisions have to be made. I have to make decisions, and you take them as they may. But for me, I'm focused on the season. I'm focused on winning. We let those things play out the way they're going to play out. Because one thing is for certain, is they play out with time, and time is going to continue to pass. And so, I focus on the present and what I can do right now for this team. All that stuff can happen when it happens."

His response, though, had fans in a tizzy. While some were happy to see him as a Warrior, some segments were worried about what the future would hold. There were also a few tweets that still hadn't forgiven Green for his altercation with Poole.

For now, all the focus for the Warriors will be on winning their eighth championship, and Green, who is averaging 8.9 points, 6.2 rebounds, and 7.1 assists, will look to do more and help Golden State defend their title.

We sincerely appreciate and respect you as a reader of our site. It would help us a lot if you follow us on Google News because of the latest update.

Thanks for following us. We really appreciate your support.

Kenny Smith details just how miserable the culture of the Sacramento Kings was, having spent 3 years with them
SACRAMENTO, CA・1 DAY AGO
FadeawayWorld.net

What was actually a compliment from Bryant, later served as the biggest mode of inspiration for Thompson.
5 HOURS AGO
FadeawayWorld.net

Former Hornets owner Bob Johnson admitted that selling the franchise was one of his big regrets.
CHARLOTTE, NC・2 DAYS AGO
FadeawayWorld.net

Stephen A. Smith Says LeBron James Doesn't Have The Resume Of Kareem Abdul-Jabbar And Bill Russell But He Is Still No. 2 Greatest Player Of All Time

Stephen A. Smith explains why LeBron James ranks only behind Michael Jordan on the all-time rankings despite not having the same resume as Kareem Abdul-Jabbar or Bill Russell.
2 DAYS AGO
FadeawayWorld.net

This trade moves Ben Simmons and Seth Curry to the Lakers in a deal featuring Russell Westbrook.
LOS ANGELES, CA・18 HOURS AGO
FadeawayWorld.net

Tragic news has struck the world of professional wrestling with the word that one of wrestling's biggest stars has lost his life at the age of 38. Celebrity entertainment outlet TMZ, which is known for breaking the news of many deaths of famous people around the world, broke the news of the death of legendary wrestler Jay Briscoe, who has tragically died in a car crash at the age of 38.
1 DAY AGO
FadeawayWorld.net

Vanessa Bryant On Why Kobe Bryant Played Through So Many Injuries While In Pain: “What About The Fans Who Saved Up To See Me Play Just Once?”

It's a pity that the next generation will witness Bryant's greatness only in the form of highlights.
2 DAYS AGO
FadeawayWorld.net

Dennis Schroder's night on Wednesday went from good to bad after cops stopped a car he was in following the Lakers' win against the San Antonio Spurs.
LOS ANGELES, CA・2 DAYS AGO
FadeawayWorld.net

Safe to say, Michael Jordan was one of a kind, and Magic Johnson knew what he could and couldn't do.
1 DAY AGO
FadeawayWorld.net

3 Trade Offers The Lakers Would Refuse For Russell Westbrook

There are some trades for Russell Westbrook that don't make sense for the Lakers.
LOS ANGELES, CA・2 DAYS AGO
FadeawayWorld.net

Rob Parker has spoken about LeBron James' historic scoring run, says it doesn't mean the same since the Lakers are not winning.
LOS ANGELES, CA・2 DAYS AGO
FadeawayWorld.net

LeBron James vs. Michael Jordan Full Comparison: Who Is The Real GOAT?

This is the full comparison between LeBron James and Michael Jordan. Once and for all, let's see who is the greatest NBA player of all time.
1 DAY AGO
FadeawayWorld.net

Serge Ibaka and the Milwaukee Bucks have agreed to a trade and Golden State is looked at as one of the potential destinations.
MILWAUKEE, WI・3 HOURS AGO
FadeawayWorld.net

Scottie Pippen couldn't be a part of the original Space Jam movie and a couple of years ago, he revealed the reason.
1 DAY AGO
FadeawayWorld.net

Lakers Fans Are Pissed At Referees After Overtime Loss Against Celtics: "We Were Robbed."

Fans had a lot to say about the recent Lakers - Celtics matchup.
LOS ANGELES, CA・15 HOURS AGO

FadeawayWorld.net provides the top news, rumors and highlights across the NBA.