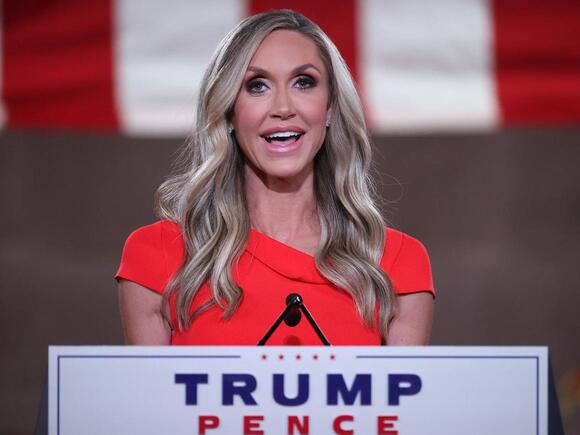 Lara Trump, who is married to former President Donald Trump's son Eric Trump, is no longer a paid contributor for Fox News because of her father-in-law's 2024 announcement , the Los Angeles Times first reported .

The network told the Times on Saturday that Lara Trump, who became a Fox News contributor last year, would no longer be paid to appear on the network.

According to the Times, her departure is due to company rules that do not allow people running for office or directly linked to active campaigns to be employed by the network.

The network decided that Lara Trump was directly connected to her father-in-law's campaign, the Los Angeles Times said. She has been a surrogate for the former president and received payment for advisory roles .

The newspaper said she hadn't appeared on Fox News since the week of November 15, which is when the former president announced his third presidential run . She can still, in theory, appear as an unpaid guest.

There is a precedent for such decisions; Sarah Huckabee Sanders had her paid-contributor deal terminated when she announced she was running for governor of Arkansas.

Fox News is owned by the media mogul Rupert Murdoch. The British newspaper i cited unnamed sources last month saying Murdoch had warned Trump that his media empire wouldn't back a Trump White House bid. His publications, including The Wall Street Journal, described Trump as a " loser " after the 2022 midterm results were disappointing for Republicans .

The British newspaper also cited a source saying Lachlan Murdoch, Rupert Murdoch's elder son, had told Gov. Ron DeSantis of Florida that the media group would back him if he ran against Trump in 2024.

The company protocol doesn't allow the network to employ people linked to active campaigns. ---- It's literally in the article, but people don't like to read. They'd rather spout ignorance and vitriol because of their bias.

Not to worry Lara! Your father in law is trailing in polls ro a guy not even running. Dementia Don won't even get through the primaries. He is already in poor health, he will be 79 years old and with his failing cognitive ability, he will be out of the campaign before you know it!!

Why is the left scared shirtless of DJT? If there was nothing to worry about the they'd just go on about their lives without saying or doing anything different. It's comical to me!

McKay Coppins, a journalist at The Atlantic, said he was "taken aback" by how often he heard MAGA Republicans say they wish Trump was dead.
MICHIGAN STATE・1 DAY AGO
TheDailyBeast

MAGA-boosting radio host John Fredericks has turned on Donald Trump, telling the former president in no uncertain terms on Tuesday that “nobody cares” about his petty media feuds and “grievances” anymore.Fredericks, a longtime supporter of the twice-impeached ex-president, largely took issue with how Trump has seemingly ignored political issues while focusing his attention on far-fetched lawsuits and complaints about “fake news.” Additionally, Fredericks grumbled about Trump privately backing Ronna McDaniel in her successful re-election bid for Republican National Committee chair.“President Trump is going to do what he wants,” Fredericks declared in a clip first flagged by Raw Story. “I think...
1 DAY AGO
Business Insider

Trump does have multiple lawyers representing him in at least a dozen cases, though it is unclear if he has more attorneys than Capone.
GEORGIA STATE・2 DAYS AGO
Business Insider

A captured member of the infamous Wagner Group said he is more 'afraid of Putin' than dying in battle, Ukrainian soldier reveals

"We're afraid of Putin," the Ukrainian soldier revealed the man said when answering whether he was afraid to fight for freedom in Russia.
14 HOURS AGO
Newsweek

Alina Habba, who was recently fined for filing a "frivolous" lawsuit, is no longer Trump's counsel in E. Jean Carroll's rape and defamation suit.
1 DAY AGO
MsBirgith

A recent NBC poll revealed that 71% of Americans believe the country is headed in the wrong direction. This is a significant increase from previous polls and suggests a growing sense of unease among the American public.
2 DAYS AGO
Business Insider

Last week, lawmakers offered amendments to legislation on the House floor for the first time since May 2016. Democrats say they're into it.
KENTUCKY STATE・1 DAY AGO
Business Insider

"I can't believe we're having this debate," one Republican said. The spat signals likely showdowns to come in the GOP-led Judiciary Committee.
FLORIDA STATE・14 HOURS AGO
Business Insider

The good news for the former president is that, for now, the rest of the 2024 GOP field remains frozen.
IOWA STATE・1 DAY AGO
Business Insider

An apparent typo in a resolution organizing the committee gives Democrats 9 members on a 12-member committee. The actual plan is to have 21 members.
PENNSYLVANIA STATE・19 HOURS AGO
Business Insider

"This will be a dog's fight, beginning to end," an ex-Manhattan investigations chief predicts of the looming contest between Trump and prosecutors.
MANHATTAN, NY・2 DAYS AGO
Business Insider

"There is no other way to talk to these fools," State Duma member and former military commander Andrey Gurulyov said.
2 DAYS AGO
Business Insider

Lawyers for Trump and the NY attorney general's office argued over the existence of the Trump Organization Wednesday as a judge warned "no delays."
FLORIDA STATE・12 HOURS AGO
Business Insider

The former president says he owns the rights to interviews conducted while he was still in office. One lawyer told Insider that's "a huge reach."
FLORIDA STATE・9 HOURS AGO
Decider.com

Sunny Hostin Heats Up ‘The View’ with Call to Fight Back Against GOP: “If They Wanna Go Low, We’ll Go to the Earth’s Crust”

The View got fiery this morning during a discussion about the attack on Nancy Pelosi’s husband, Paul Pelosi. The panel heated up as they chatted about new video from the October attack that shows his home was broken into and how he tried to fight back before getting beaten. While discussing the “conspiracy theories” being spread by conservative lawmakers about the incident, Sunny Hostin refused to hold back or back down, demanding Democrats fight fire with fire. Whoopi Goldberg, who introduced the topic, condemned people making light of Pelosi’s attack and injuries, asking, “Why are you allowed to laugh about the...
1 DAY AGO
Business Insider

Dianne Feinstein's 2024 Senate campaign raised just $558.91 at the end of last year. It may be the clearest sign yet that she won't seek re-election.

If Feinstein was seriously planning to give fundraising juggernauts Adam Schiff and Katie Porter a run for their money, she'd be in trouble.
CALIFORNIA STATE・19 HOURS AGO
Business Insider

"Later in the week, we're setting up the election crime unit, Steve. So everybody, stay tuned. It's going to be big," Lindell said.
ARIZONA STATE・2 DAYS AGO