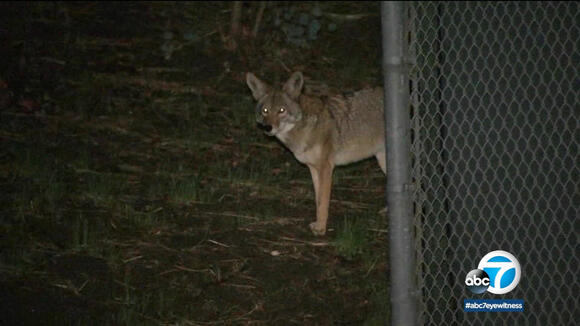 A day after a coyote attacked and tried to drag away a little girl in front of her Woodland Hills home, wildlife officials were combing the neighborhood in search of the animal. Officers with the California Department of Fish and Wildlife were armed with flashlights and dart guns, searching through wooded areas and behind fences hoping to capture the coyote that attacked the child. While they were searching Eyewitness News cameras spotted one coyote lurking near the street but it was not captured. In Friday's incident, surveillance video shows the wild animal stroll up behind the toddler, grab her by the leg and start to drag her away. Her father hears her screaming and is able to save his daughter from the coyote. The animal boldly stays on the street watching until he makes further efforts to scare it away. Coyote attacks young child on Woodland Hills front lawn

Doorbell video shows a coyote drag a young girl on the front lawn of a Woodland Hills home until her father chases the animal off.

The girl is recovering and was not seriously injured. The family has passed the girl's clothing to wildlife officials for DNA analysis, in case a coyote is trapped in the area. "They try to identify the location on the child's clothing where the animal's teeth actually went through the clothing," said Patrick Foy, a captain with state Fish and Wildlife. "And if they can identify that spot they can try to extract DNA from the microscopic traces of saliva left behind by the attacking animal." Neighbors say coyotes in the area are bold and this is not the first attack in the community. Earlier this year, one Woodland Hills resident captured video of a coyote sneaking into her home through the doggie door. Coyote sneaks into Woodland Hills home

A coyote prowling a Woodland Hills neighborhood made its way right into a home, and it was all caught on home surveillance video.

"They don't run," said Woodland Hills resident Michael Keppel. "They just kind of watch and it's a problem now. They got some guy in the parking lot here about a month ago who had a little dog that they went after." Many in the area say the coyote problem is only made worse by people who leave food outside, either intentionally for wildlife or for their own pets. That is a bad idea, experts say. "You know, feral cat feeding stations - you don't leave the food out," said Rebecca Dmytryk, CEO of Wildlife Emergency Services. "These animals are here because the food is here. If we remove those food resources they will go away. It's been proven." Another tip: Secure your garbage so you don't attract rodents and raccoons.

The acting consul of Chinese Consulate General in L.A. said the daughter of one of the victims is currently in China and is applying for a travel Visa to visit Monterey Park.
MONTEREY PARK, CA・8 HOURS AGO
ABC7

One person was rushed to the hospital with injuries after an explosion occurred on the University of Southern California campus Thursday afternoon, authorities said.
LOS ANGELES, CA・8 HOURS AGO
ABC7

A Huntington Beach neighborhood is on edge after a pit bull attacked a woman and her dog, leaving the dog with severe injuries.
HUNTINGTON BEACH, CA・1 DAY AGO
ABC7

A couple in Arcadia is selling doughnuts to raise money for the victims of the Monterey Park mass shooting. It's an effort to honor the victims, including one who was very close to the couple.
MONTEREY PARK, CA・6 HOURS AGO
ABC7

L.A. Sheriff Robert Luna said Monterey Park Police found a motorcycle just one block away from the crime scene that was registered to Huu Can Tran.
MONTEREY PARK, CA・20 HOURS AGO
ABC7

A driver was taken into custody after leading authorities on a high-speed chase from Long Beach through Orange County Thursday.
ORANGE COUNTY, CA・9 HOURS AGO
ABC7

A man suspected of arson was taken into custody Thursday afternoon after a massive and intense fire broke out at an apartment building in the Westlake District.
LOS ANGELES, CA・8 HOURS AGO
ABC7

A man armed with a gun was shot and killed by a Los Angeles County sheriff's deputy while a search warrant was being served at a home in Maywood, authorities said.
MAYWOOD, CA・18 HOURS AGO
ABC7

The man who disarmed the Monterey Park mass shooter less than half an hour after the massacre is set to receive a special honor for his actions.
ALHAMBRA, CA・14 HOURS AGO
ABC7

A chase involving a motorcyclist ended with a dramatic takedown Thursday night in the streets of Compton.
COMPTON, CA・3 HOURS AGO
ABC7

Police said the assault weapon that was used in the attack is uncommon and was one of several high-power guns in Huu Can Tran's possession that night.
ALHAMBRA, CA・2 DAYS AGO
ABC7

Monterey Park Chief Scott Wiese defended his decision not to warn the public for hours that a killer was on the loose, saying he didn't have enough information to effectively alert residents.
MONTEREY PARK, CA・1 DAY AGO
ABC7

Lost in the aftermath of the Monterey Park ballroom dance hall shooting that left 11 people dead is an alarming fact: It took five hours for authorities to alert the public that the gunman was on the loose.
MONTEREY PARK, CA・2 DAYS AGO
ABC7

Canyon Crest Town Center in Riverside is known for its small businesses that offer an array of eateries and shops. But since the start of the new year, it's been the target of burglars.
RIVERSIDE, CA・11 HOURS AGO
ABC7

Vice President Kamala Harris traveled to Monterey Park to meet with victims' families days after a mass shooter there killed 11 and wounded at least nine others inside a dance studio.
MONTEREY PARK, CA・1 DAY AGO
ABC7

The cast and crew of the Oscar-nominated film "Everything Everywhere All at Once" honored the victims of the Monterey Park massacre with a touching Lunar New Year celebration at one of the city's popular restaurants.
MONTEREY PARK, CA・1 DAY AGO
ABC7

A man who was stabbed to death at a Mid-City Los Angeles nursing home Friday has been identified as a 61-year-old resident of the facility.
LOS ANGELES, CA・3 DAYS AGO
ABC7

The indictment charges David Brian Pearce, 40, with the November 2021 deaths of Christy Giles, a 24-year-old model and aspiring actress, and her friend, Hilda Marcela Cabrales-Arzola, 26.
BEVERLY HILLS, CA・2 DAYS AGO