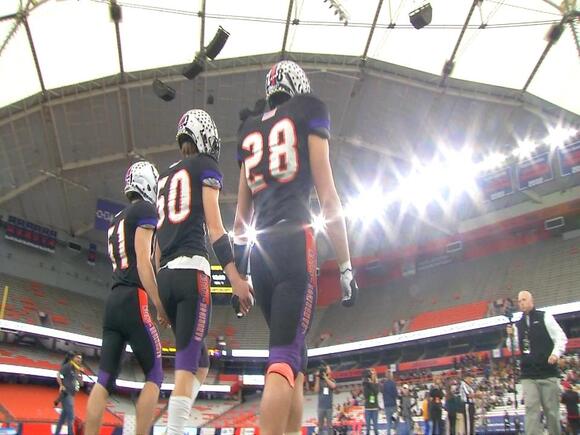 SYRACUSE, NY ( NEWS10 ) — Five Section II football teams entered the semifinals of the NYSPHSAA playoffs last weekend, and only one emerged victorious: Cambridge/Salem, the program with the most postseason success in the section. But Cambridge’s bid for a fourth state title fell short Saturday; head coach Doug Luke’s squad lost 63-20 inside the JMA Wireless Dome to a Section IV Tioga team that claimed its’ second straight championship.

Of Luke’s many shining moments at the helm of Cambridge, winning a state title with this year’s team – given all the position changes and roster shuffling the group went through at the start of the year – would’ve arguably been his greatest feat yet.

But they ran into a Tigers squad that hadn’t lost a game in 19 months, and was on a mission Saturday afternoon.

After a Cambridge punt to start the game, Tioga made a statement on its’ opening drive, carving right through Cambridge’s defense before junior running back Ousamane Duncanson powered into the end zone from 12 yards out for the first score.

Cambridge’s offense showed glimpses of being able to drive the ball downfield on its’ following possession; eighth-grade quarterback Stephen Yakubec delivered a 19-yard pass to sophomore receiver Baxter Mattson to get into Tigers territory.

But later that series, Yakubec was picked off by Drew Macumber, who returned the interception 58 yards for a house call that gave Tioga a 14-0 edge with 13 seconds to play in the first quarter.

The Tigers would go on to add three more touchdowns in the second quarter and take a 35-0 lead into the locker room at halftime.

Cambridge showed some life in the second half, finding pay dirt on three occasions. All three scores came on the ground: Yakubec on a one-yard QB sneak in the third quarter, junior running back Brice Burr on an eight-yard scamper in the fourth frame, and sophomore back Isaiah Lohret followed that up with a five-yard score of his own.

The first-half deficit was just too much to overcome, though, and Tioga rolled to the 63-20 victory for its’ second state title in as many seasons.

After the game, Luke recalled what contributed to his team’s first-half struggles, but also reflected on what a special year his group had.

“I think when we got behind by a touchdown, or two, we started panicking,” said Luke. “And…things just kind of fell apart. I think…our offense scored three touchdowns for them…and early. (But) to come this far is really an accomplishment. We didn’t finish what we hoped we’d finish, but…that doesn’t take anything away of how fun…the season was, and the things that we did, and the things that were accomplished. So, we’ll just kinda toss this one away, and we’ll start all over again next year.”

Why booking directly with airlines can be more expensive

Cambridge ends the season at 13-1, and posted a perfect, 7-0 mark in league play. Another deep run is certainly in play for next year’s squad, considering they’ll return Yakubec, Burr, and junior running back Brayton Cary, who accounted for 668 yards and eight touchdowns this season.

Congratulations to this week’s winners of our Play of the Week poll, Siena's Zek Tekin and Andrew Platek!
LOUDONVILLE, NY・7 HOURS AGO
NEWS10 ABC

They will be hosting their first-ever playoff game at the Glens Falls Rec Center on Tuesday against Saranac-Lace Placid.
GLENS FALLS, NY・1 DAY AGO
NEWS10 ABC

The MAAC’s leading scorer, Thomasson shot 5-6 in the second half and scored 18 points overall for Niagara (13-9, 8-5) which has won four straight.
LOUDONVILLE, NY・1 DAY AGO
NEWS10 ABC

The United made it to this point thanks to their style of play that’s helped them earn the number one seed in Section 2. Junior forward Bailey Duffy said it’s a recipe that’s resulted in 15 wins and one loss.
GLENS FALLS, NY・4 HOURS AGO
NEWS10 ABC

TROY, N.Y. (NEWS10) — Bobby Seale, a co-founder of the Black Panthers, will be visiting Hudson Valley Community College (HVCC) on Thursday, February 9, at 6 p.m. The public is welcome to attend and come see Seale talk at the Bulmer Telecommunications Center Auditorium at the Troy campus. Seale...
TROY, NY・14 HOURS AGO
NEWS10 ABC

In about two weeks Tommy Kahnle will trade in Albany's frigid weather for some Tampa, Florida sun. The New York Yankees reliever and Shaker High School alum reports for spring training on Feb. 13, but he had some business to attend to in the Capital Region first Friday night.
ALBANY, NY・3 DAYS AGO
NEWS10 ABC

Tyler Hubbard of Florida Georgia Line has announced he will bring his Summer tour to the Great New York State Fair on Tuesday, August 29 at 8:00 p.m. at the Chevy Park Experience Stage for a free concert.
ALBANY, NY・15 HOURS AGO
NEWS10 ABC

Trophies are awarded to the top 5 finishers and to the angler with the smallest catch.
HADLEY, NY・15 HOURS AGO
NEWS10 ABC

He may only be 9-years-old but he's already graduated high school and started college courses.
HARRISBURG, PA・6 HOURS AGO
NEWS10 ABC

The Saratoga Tattoo Expo is written in ink for April 2023 at the Saratoga Springs City Center. Immerse yourself in the talent of tattoo artists and piercer's from all over at this event.
SARATOGA SPRINGS, NY・12 HOURS AGO
NEWS10 ABC

Big Time Rush will be performing at the Saratoga Performing Arts Center (SPAC) on July 3, as part of their "Can't Get Enough" tour. This tour comes on the heels of their 2022 sold-out North American tour. Tickets for the event will go on sale to the public on February 10 at 10 a.m. Tickets are available to Big Time Rush fan club members exclusively on February 7, starting at 10 a.m., through February 9 at 10 p.m.
SARATOGA SPRINGS, NY・17 HOURS AGO
NEWS10 ABC

The Albany Comic Con will return on Sunday, June 11, at the Polonaise (Polish Community Center) at 225 Washington Avenue Extension in Albany. The event will offer cosplay, collectives, memorabilia, and more.
ALBANY, NY・14 HOURS AGO
NEWS10 ABC

The City of Albany is looking for its next Tulip Queen. The queen will be crowned during the 2023 Albany Tulip Festival on May 13 and May 14.
ALBANY, NY・16 HOURS AGO
NEWS10 ABC

The morning radio show Free Beer and Hot Wings will be returning to Troy Savings Bank Music Hall on April 28. Tickets will go on sale to the public on Friday at 10 a.m.
TROY, NY・16 HOURS AGO
NEWS10 ABC

NYSEG reports power outages in the areas of Granville, Hebron, Jackson and Salem for February 4. Washington County deputy director Tim Hardy explains they're in contact with NYSEG who are working to repair the outages.
WASHINGTON COUNTY, NY・2 DAYS AGO
NEWS10 ABC

After the brutal cold we had to start off the weekend, its only fitting that we get some above average temperatures to balance it out, right? Temps cruise to right around 40 degrees this afternoon as a warm front lifts past us. Expect some breaks of sun later on as well.
ALBANY, NY・1 DAY AGO
NEWS10 ABC

Erie Canal system to open in May