Jaw-Dropping Second Half Shows These Hogs Coming Together 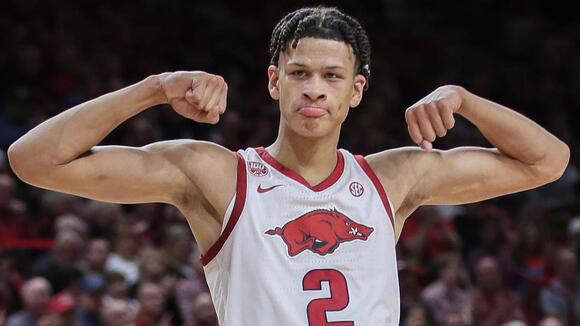 With a complete roster finally able to play, Razorbacks coming together.

FAYETTEVILLE, Ark. — Arkansas may have given a clue what they can be after halftime Saturday afternoon.

After a stumbling first half, they out-scored the out-manned Spartans, 49-23, for a 99-58 win with all the walking wounded back on the floor and starting to figure it out.

It wasn't really surprising they didn't look connected at times in the first half with a defensive collapse in the last minute there that had Musselman jumping up and down like a shortstop that just won the World Series.

Things got better in the second half as what he later admitted was the deepest team he's had at the college level took complete control.

"Tonight was the first time our full roster was together and we looked like it in the first half," Musselman said. "We struggled a little bit with trying to figure things out. I know I struggled as well with substitution patterns and stuff.

"The second half the guys settled in, and they played with great offensive freedom."

Trevon Brazile scored a career-high 23 points and Ricky Council IV added 17 points. Nick Smith, Jr., got his first career start and saw his most extensive work since missing the first six games with an injury, scored 16 points with five assists.

"Tonight he played with great freedom, even mentally," Musselman said about Smith. "He knew there was no minutes restriction on him. He changes our team offensively with his ability to make threes and beat people off the bounce."

It's clearly a different team with everybody back.

Despite 12 lead changes, Arkansas controlled most of the first half, but only led by five at the break. The Razorbacks, up three (44-41) at the 17:27 mark in the second half, reeled off a 15-2 run to take 16-point lead and never looked back.

The biggest boost in the second half came from Jalen Graham who scored 11 points with six rebounds in 11:39 played – all in the final 20 minutes.

San Jose State was led by Omari Moore with 21 points, but he only scored five second-half points. Sage Tolbert finished with a double-double (12 points and 11 rebounds).

Arkansas concludes the current three-game homestand on Tuesday (Dec. 6) versus UNC Greensboro. Tipoff at Bud Walton Arena is set for 6 p.m. and the game will be televised on the SEC Network.

• San Jose scored the next four points before Ricky Council IV his two free throws with 0.4 seconds left before the break to provide the 40-35 score at the break.

• Arkansas only missed seven field goals in the second half (22-of-29) and no player missed more than one shot from the field.

• Trevon Brazile was the first Razorback sub for the eighth straight game.

• Nick Smith made his first collegiate basket at 17:57, a 3-pointer from the right wing.

• Second-year walkon Cade Argobast scored his first collegiate points, hitting a 3-pointer from the right wing with 1:32 left in the game.

• This is the first game all 15 Razorbacks played in a game this season and 10 scored.

• Arkansas had a season-high 22 assists, including six from Black, five from Smith, three from Davonte Davis and three from Derrian Ford.

Don't be surprised to see Makhi and Mekhel Mitchell to handle Oscar Tshiebwe.
FAYETTEVILLE, AR・4 HOURS AGO
All Hogs

Razorbacks will need to be able to hold serve in Bud Walton and steal a road win against a daunting final stretch of the season
FAYETTEVILLE, AR・8 HOURS AGO
All Hogs

Five-star signee took to Instagram almost immediately after loss, also hinted at whether there will be a possible rematch with Davis next season
FAYETTEVILLE, AR・6 HOURS AGO
All Hogs