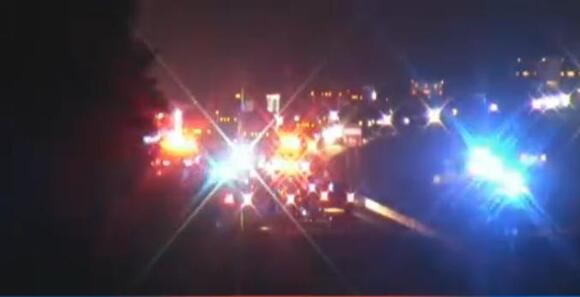 PASCO COUNTY, Fla. (WFLA) — The Florida Highway Patrol is investigating a crash in Pasco County that shut down all southbound lanes of I-75 on Saturday night.

According to FHP, all southbound lanes were blocked at MM-284, near San Antonio at around 10:30 p.m.

FHP said a sedan carrying three adults and one minor from Jacksonville changed lanes ‘at high speed’ and lost control. It rotated across the roadway and hit the back of another sedan before catching fire.

The second sedan was sent barreling towards the shoulder, where it overturned before coming to a stop. The driver, a 31-year-old man from Marianna, sustained minor injuries.

when will stupid drivers stop speeding ? how many lives must die before they wake up one day and say hey , if i speed it could be me that dies?

A 38-year-old Hialeah man was arrested for his alleged connection to a deadly shootout with a Florida Highway Patrol trooper early Saturday morning.
HIALEAH, FL・17 HOURS AGO
WFLA

A 30-year-old Tampa man was struck and killed Sunday evening in what authorities described as a hit and run along CR-587 in Hernando County.
TAMPA, FL・22 HOURS AGO
WFLA

A man has died after he was struck by oncoming cars while attempting to cross the road on Monday night.
BRADENTON, FL・1 HOUR AGO
WFLA

Hernando County deputies are searching for a missing teenager who disappeared last week while on the way to his school bus.
BROOKSVILLE, FL・19 HOURS AGO
WFLA

The Hillsborough County Sheriff's Office is investigating after a person was found shot to death at an apartment complex overnight.
TAMPA, FL・2 HOURS AGO
WFLA

"Everybody got hurt," Hanna recalled. "My customers got scared."
HILLSBOROUGH COUNTY, FL・17 HOURS AGO
WFLA

A failed attempt at serving an arrest warrant in connection to the Lakeland mass shooting that left 10 injured last week turned into "mayhem" and "pandemonium," according to authorities.
LAKELAND, FL・18 HOURS AGO
WFLA

The Pinellas County Sheriff's Office said it has fired one of its deputies after he was arrested for driving under the influence.
PINELLAS COUNTY, FL・1 DAY AGO
WFLA

Investigators with the Hillsborough County Sheriff's Office are investigating a deadly shooting at an apartment complex in New Tampa.
TAMPA, FL・2 HOURS AGO
WFLA

The Tampa Police Department has placed one of its officers on leave after he was arrested during a domestic dispute, according to a release.
TAMPA, FL・22 HOURS AGO
WFLA

According to authorities, a FHP trooper was on patrol on I-75 around 3:15 a.m. when the trooper saw two men who appeared to be stealing a pickup truck or something inside it. When the trooper approached, they drove off, initiating a car chase.
WESLEY CHAPEL, FL・2 DAYS AGO
WFLA

Hillsborough County deputies said they are searching for a shooter who killed one person and injured another before stealing their vehicle Saturday night.
HILLSBOROUGH COUNTY, FL・2 DAYS AGO
WFLA

A man was killed while crossing the street in Largo on Saturday.
LARGO, FL・2 DAYS AGO
WFLA

Lakeland steakhouse to close after catching on fire overnight

A well-known Lakeland steakhouse has suffered "extensive damage" due to a fire overnight.
LAKELAND, FL・35 MINUTES AGO
WFLA

Dozens of people have called police and said a “Josh Lewis” is contacting them, claiming to be the interim police chief.
LAKELAND, FL・16 HOURS AGO
WFLA

Often, we hear people complain about what garbage collectors don’t pick up. But for Barry and Susie Cort, it’s what they did pick up—by mistake— that has them furious.
DADE CITY, FL・15 HOURS AGO
WFLA

A person was shot during an apparent carjacking near Tampa on Saturday.
TAMPA, FL・2 DAYS AGO
WFLA

The City of Tampa is warning drivers who frequent the Howard Franklin Bridge to plan an alternative route Monday night as all southbound lanes of the highway are closed for construction.
TAMPA, FL・23 HOURS AGO