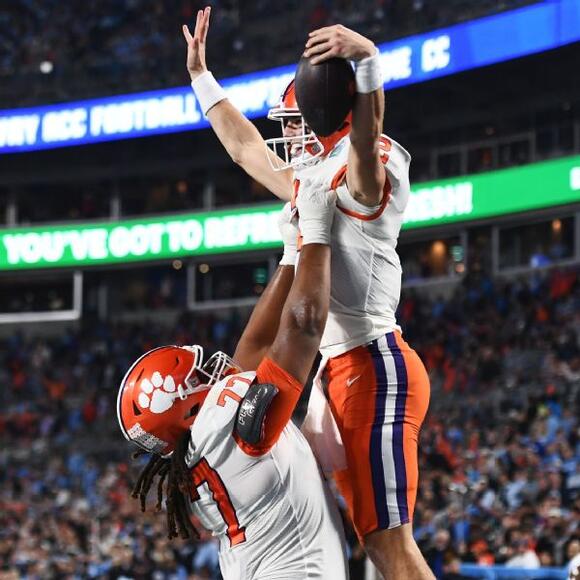 CHARLOTTE, N.C. -- Clemson Tigers will move forward with quarterback Cade Klubnik after he came off the bench and lifted Clemson to a 39-10 win over North Carolina in the ACC championship game Saturday, the seventh conference title in eight years for the Tigers.

DJ Uiagalelei started the first two drives and struggled, going 2-of-5 for 10 yards. Both his drives ended in three-and-outs. Klubnik then came in and led a scoring drive and played the rest of the game, going 20-of-24 for 309 total yards and two total touchdowns.

Afterward, coach Dabo Swinney said the plan heading into the game was for Klubnik to come in on the third series no matter what. Once Klubnik started moving the ball down the field, there was no turning back.

Swinney said Klubnik will start the Orange Bowl on Dec. 30.

"Things have to happen the way they're supposed to happen, and tonight, that's the way it went, and Cade was ready," he said. "You got a chance to see what he can do. He played in rhythm, guys made plays for him. He's really, really fast. He can really make plays with his legs. It was a great night and a glimpse of our future and what it looks like at Clemson."

Swinney said repeatedly in the week leading up to the ACC championship game that Uiagalelei would start against the Tar Heels despite struggling in a 31-30 loss to South Carolina to close the regular season and deflected blame from Uiagalelei in the loss, pointing to turnovers and drops from receivers as contributing factors.

Though Uiagalelei struggled against the Gamecocks, Swinney opted not to use Klubnik in that game. It turns out, given what happened to ranked teams ahead of them, that loss might have cost Clemson a spot in the College Football Playoff.

When asked whether he had any regrets over not playing Klubnik against South Carolina, Swinney again deflected blame from Uiagalelei.

Klubnik earned game MVP honors for his performance Saturday night. Afterward, when asked his favorite moment, Swinney disclosed the throwback pass Klubnik caught from Phil Mafah on the second scoring drive was a play Klubnik begged them to use.

"I think I had a little bit of a different mindset today," Klubnik said. "I'm not exactly sure what it was. I just came ready to play free and trust in God's time with everything. I didn't know how the game was gonna go. I really didn't. But I just knew that God was in control of the whole thing from the very start."

Swinney reiterated that they thought there might be times throughout the season when Klubnik would be ready, but that the timing did not seem right.

After Saturday's performance and Klubnik already named the starter for Clemson's next game, Uiagalelei's future with the team is in question.

"I'm just worried about the ACC and enjoying it, and ... I don't know," Uiagalelei said.

He added he plans to treat the next month "the same way I've always treated it. Put my best foot forward and go out and play football."

"We hoped that he'd play well," Swinney said of Uiagalelei. "But he didn't have a great series, and we stuck with the plan and the rest is history. You gotta give credit to Cade for that. He came in and took it.

"So moving forward, I'm sure there'll be plenty of conversations. Obviously, it didn't end tonight the way he would like, but he's got a bright, bright future as a football player."

Battles leads as Georgia clamps down on MS State

Diamond Battles records a game-high 19 points as Georgia holds Mississippi State to a season-low in points with the 62-34 win.
ATHENS, GA・11 HOURS AGO