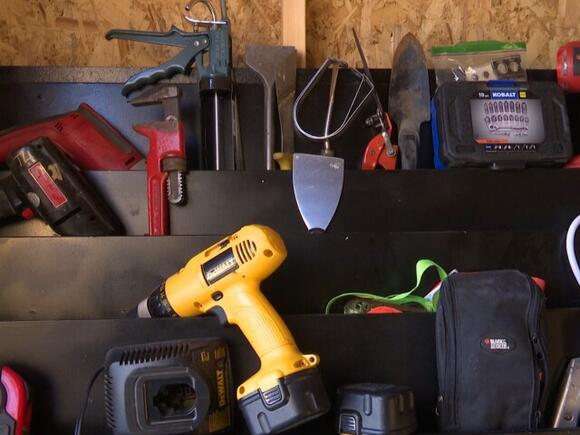 A Red Lodge woman has started a community tool library at no cost, offering residents a sustainable way to access tools that are oftentimes hundreds of dollars to purchase.

Stephanie Naftal has lived in Red Lodge for more than 10 years. She previously lived in Missoula, where she found a community tool library at the Missoula Urban Demonstration Project.

Naftal was inspired by this idea, and told MTN News on Saturday she knew she had to bring the donation-based program to Red Lodge.

“The people donating the tools are grateful because they just sit in their garage. So they’re happy to just get rid of them, to go to people who actually need them and want to use them but can’t afford to buy them," Naftal explains. "Obviously, people who are borrowing the tools really appreciate it, especially after the flood."

Red Lodge was just one of many Montana communities impacted by flooding in June of 2022 .

While this tool library is a great resource for Red Lodge residents attempting to make repairs following the flood, Naftal explains it has been in operation for more than a year. Recycling Red Lodge recently donated a shed to house the library, which Naftal says she is grateful for.

The physical tool library is located behind the Red Lodge Community Church at 308 S. Broadway Ave., but Naftal explains community members can find what tools are available on the library's Facebook page.

“In Red Lodge, we are trying to consume less, so that’s another benefit to it. (This) will kind of help people to get on board too with less consumption," Naftal says. "Not everyone has to have every tool at their disposal every day. And hopefully, other places will think it’s a good idea and do it, because like I said, not everybody can afford to have all of these tools."

The library has a shop vacuum, drills, socket sets, a lawn mower, and much more. Naftal wants to encourage community members to continue donating.

“One of our residents donated a couple of fans and a shop vac, and they didn’t last a day in the tool shed. Which was awesome. I was really happy to be able to have that for people,” Naftal explains.

All types of tool donations are accepted, but Naftal is also looking for some assistance.

"Anything people want to get rid of is great,” Naftal says. “But right now it’s just me, so that’s another hope, is someone else will come on board and help me do this."

Naftal says that she is hoping another community member will help her run the library.

“I would love it if someone comes on board to do this with me, that actually knows something about tools, which I really don’t. I just think it’s a good idea,” Naftal explains.

“I hope that it grows and I hope that people become more interested in donating and using the tools,” Naftal says. "It is really good to have it now."

Tony Seitz started crafting unique beehive boxes after taking up beekeeping with his son. He has been retired since 2009 and enjoys creating the colorful boxes as a hobby.
BILLINGS, MT・1 HOUR AGO
Q2 News

Dozens of crashes were reported before the shutdown, including an overturned tanker carrying asphalt oil.
LIVINGSTON, MT・58 MINUTES AGO
Q2 News

In Billings, police issued 268 red light citations in 2022 and 169 warnings, and they say there are far more people breaking the red-light law.
BILLINGS, MT・1 DAY AGO
Q2 News

The bakery served oven-fired pizza and was busy all night helping to make food deliveries to the nearby hotels and motor inns that were also busy accommodation travelers.
BILLINGS, MT・21 HOURS AGO
Q2 News

The deep freeze often spells troubles for pipes and that's definitely the case in Laurel, as the CVS pharmacy on Southeast 4th Street is now closed after pipes burst.
LAUREL, MT・1 DAY AGO
Q2 News

I-90 closed from Livingston to Big Timber for bad weather

“The doctors have said she probably wouldn’t be here now had we not jumped in, and she came to us,” said Renee.
RED LODGE, MT・3 DAYS AGO
Q2 News

Travel near the mountains west of Billings is largely shut down until Wednesday afternoon. Northeast Montana has another round of cold. But the trend is warmer.
BILLINGS, MT・1 DAY AGO
Q2 News

The Veazey family suffered the loss of their daughter on New Year's Day. The mother, Morgan Veazey, is now wanting to give back to the hospital that helped them through the difficult time.
BILLINGS, MT・1 DAY AGO
Q2 News

The warming trend continues today as daytime highs push above the freezing mark for most of the area.
BILLINGS, MT・13 HOURS AGO
Q2 News

The Petroleum Club charged, and continues to charge, a monthly fee for members to be able to dine at the restaurant.
BILLINGS, MT・6 DAYS AGO
Q2 News

The bar was established in the 1940s and has seen a few owners in its time. Larry Falls Down is a regular at the popular location and can remember at least a few owners.
EDGAR, MT・5 DAYS AGO
Q2 News

Among the semifinalists is The Backporch BBQ restaurant in Roundup, which has landed a spot in the Best New Restaurant category.
ROUNDUP, MT・5 DAYS AGO
Q2 News

After undergoing two surgeries in 367 days to remove brain tumors, a Laurel firefighter is now paying it forward by raising money for other brain cancer patients.
LAUREL, MT・2 DAYS AGO
Q2 News

The Continuum of Care has a Point-In-Time survey to determine how many people are experiencing homelessness.
BILLINGS, MT・5 DAYS AGO
Q2 News

The two new stores would expand the footprint of the area's largest to seven stores in Billings and eight total in Yellowstone County.
BILLINGS, MT・6 DAYS AGO