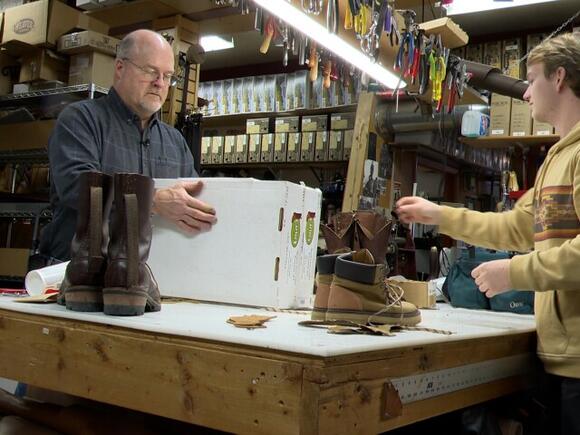 Carter’s Boots in Bozeman is filled with energy, the smell of leather, and the sounds of cobblers. As people come and go, the loud sounds of downtown Bozeman traffic fill the store.

Carter's has been a staple of downtown Bozeman for more than 20 years; they have been here for residents, whether it’s a simple polish or a heel redo.

After more than 20 years at their downtown location, Carter's is getting ready to say goodbye to downtown, but it’s not a goodbye to their customers.

“We're just a family business and man, I like to talk to people,” says Carter.

Family is at the center here. The father and son duo who own and manage the store greet their customers on a first-name basis, and their customers are just an extension of their family.

“There's the people that need a lift on their shoe, and they can't walk without us,” says Garrett Carter.

“So many of my customers have been customers for a long time. So, they really feel like family,” says Jeff.

Their move isn’t the only change. Jeff’s son Garrett will soon be in charge of the store where he watched his dad work.

“I grew up here, right over here, and this is where I'd play and watch my dad work and go out and I'd talk with customers before I was even,” says Garrett.

Growing up in the business, Garrett didn’t see himself taking it over.

“I never wanted it at first,” says Garrett.

Garrett says as he’s grown up with the business and become more involved, his passion for the store has grown. He’ll be able to leave his own mark.

“Being a local staple was really cool just because you know, as a kid I grew up watching Bozeman grow and I’ve always been community-oriented,” says Garrett.

As for Garrett's dad, he’ll take a step back so that he can have more fun.

“You know, I'm going to miss the downtown. There's a lot of things about downtown. I love it, I grew up here. We've been downtown for 40 years,” says Jeff. “He can take over and I can come more semi-retired.”

As the doors close on their downtown location one last time.

"Kind of looking forward to the next chapter,” says Jeff.

Carter’s last day in downtown is December 24 . They open at their Four Corners location on Jan. 2.

Phew! At first I thought another one of Bozeman's iconic businesses was closing. So happy after reading that it's not only staying open but it's growing and needs more space! Carter's is a great family owned business and deserves to keep it's doors open!

There is a new option for groceries in Bozeman as of Wednesday, Feb. 1. The new 30,000-square-foot Whole Foods store opened its doors to customers for the first time.
BOZEMAN, MT・1 DAY AGO
KBZK News

The bakery served oven-fired pizza and was busy all night helping to make food deliveries to the nearby hotels and motor inns that were also busy accommodation travelers.
BIG TIMBER, MT・2 DAYS AGO
KBZK News

A domesticated duck was found with multiple blowdarts in its body Sunday evening, January 29. This prompted a rescue between volunteers and Bozeman Animal Control.
BOZEMAN, MT・3 DAYS AGO
KBZK News

Cattle trailer crashes, closing I-90 completely between Logan and Manhattan

The Montana Department of Transportation reports that traffic is being diverted off I-90 in both directions between Logan and Manhattan due to a commercial vehicle crash in the median.
GALLATIN COUNTY, MT・3 HOURS AGO
KBZK News

A multi-phase project in north Bozeman is expected to bring plenty of commercial and residential properties to the area.
BOZEMAN, MT・21 HOURS AGO
KBZK News

The City of Bozeman and The Trust for Public Land are moving forward on a fun new activity for kids at Story Mill Park—a splash pad.
BOZEMAN, MT・2 DAYS AGO
KBZK News

In Billings, police issued 268 red light citations in 2022 and 169 warnings, and they say there are far more people breaking the red-light law.
BILLINGS, MT・2 DAYS AGO
KBZK News

I-90 still closed from Livingston to Big Timber

At Meadow Lark Elementary, a Shakespeare classic is coming to life. It’s all thanks to a group of Bozeman-based actors.
BOZEMAN, MT・6 DAYS AGO
KBZK News

January was National Stalking Awareness Month, and Haven wanted to spread awareness about the act of stalking, as well as how methods of stalking have changed.
BOZEMAN, MT・2 DAYS AGO
KBZK News

Students at Gallatin High School felt like one thing was missing when the high school first opened, a student newspaper.
BOZEMAN, MT・4 DAYS AGO
KBZK News

A 4.1 magnitude earthquake struck near Livingston on Monday, Jan. 30, 2023 according to the U.S. Geological Survey.
LIVINGSTON, MT・4 DAYS AGO
KBZK News

We first told you in December that Montana US Senator Jon Tester says nearly a billion dollars is allocated in the current federal budget for infrastructure repairs at Yellowstone National Park.
MONTANA STATE・7 DAYS AGO
KBZK News

National Signing Day was in full force at Belgrade on Wednesday. Carter Schmidt, one of the most dominant wrestlers in the state, will take his talents to North Dakota State University.
BELGRADE, MT・1 DAY AGO
KBZK News

News Literacy Week: How each generation gets their news

According to Pew research, 71% of Gen Z get their news from social media. I went to Montana State University to see if that trend matched with students on campus.
BOZEMAN, MT・6 DAYS AGO