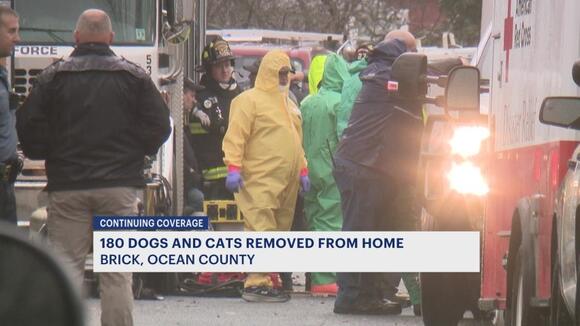 Reports of a strong odor coming from a Brick Township home led to the bust of an alleged puppy mill.

Police say there were 135 dogs and 45 cats inside the home on the 100 block of Arrowhead Park Drive. At least two dogs were found dead.

It took approximately 10 hours for rescuers in hazmat equipment to remove the animals. The animals were then transported to a number of shelters in the area.

Brick Township Police Chief James Riccio told News 12 New Jersey that officers were called to the home Friday at 7:30 p.m. with reports of a possible puppy mill that was being operated out of the house. Riccio said officers went to the house and met with the residents.

"They were permitted into the house and found an animal hoarding division, inhumane conditions,” said Riccio.

Two residents by the name of Aimee Lon-Zak and Michele Nize, who operated by the name "Crazy Rescue Ladies" were charged with animal cruelty and child endangerment.

Authorities released 911 calls made by 7-Eleven employees who locked themselves in a bathroom during a robbery.
FAIR LAWN, NJ・1 DAY AGO
News 12

News 12 was told the men were stabbed in the leg, chest and arm.
NEW YORK CITY, NY・1 DAY AGO
News 12

Nassau police responded to Merrick Avenue and Broadcast Plaza where the 31-year-old man was lying on the ground with multiple stab wounds.
MERRICK, NY・23 HOURS AGO
News 12

Authorities say the police officers were attempting to make a traffic stop when they collided with another car carrying a 29-year-old man, a 29-year-old woman and a 6-year-old boy.
NEW YORK CITY, NY・1 DAY AGO
News 12

The three inside allegedly stole $200 from the register, a cellphone and other unknown products.
NEW YORK CITY, NY・1 DAY AGO
News 12

Authorities say the 34-year-old victim was shot in the leg and torso following a verbal dispute.
NEW YORK CITY, NY・1 DAY AGO
News 12

Suffolk Police Highway Patrol officers say they responded to a 911 call regarding debris in the roadway.
OYSTER BAY, NY・1 DAY AGO
News 12

The 7-Eleven on Route 4 in Elmwood Park was the latest location to be hit. It happened Wednesday night.
ELMWOOD PARK, NJ・2 DAYS AGO
News 12

A 15-year-old boy has been taken into custody after a shooting on Wednesday in Linden.
LINDEN, NJ・2 DAYS AGO
News 12

News 12 obtained exclusive video from multiple angles inside the shelter, showing a staff member throwing food away from a group of Venezuelan migrants staying at the facility.
BRONX, NY・1 DAY AGO
News 12

Turning tragedy into a legacy: Loved ones celebrate life of slain Bronx teen

Last April, News 12 reported that two 16-year-old girls and a 17-year-old boy were on their way home from school in Melrose around 2 p.m. when they were caught in the crossfire of gunshots on the corner of Saint Ann Avenue and East 156th Street.
BRONX, NY・23 HOURS AGO
News 12

A school bus crashed into a home in West Caldwell near Terrace Place and Passaic Avenue.
WEST CALDWELL, NJ・2 DAYS AGO
News 12

Residents of the Georgia King Village housing complex in Newark are demanding better living conditions. They say that their homes are infested with mice and rats.
NEWARK, NJ・1 DAY AGO
News 12

The People’s Organization for Progress said the rally was about standing in solidarity.
NEWARK, NJ・1 DAY AGO
News 12

The prosecutor’s office says that police officers were called to the facility on Jan. 16 to help with a combative patient.
SOUTH PLAINFIELD, NJ・2 DAYS AGO
News 12

A Brooklyn mom of three is still reflecting on the traumatic experience when an Uber driver attacked her while she was on her way to pick up her kids from school. "This man picked me up like a rag doll and punched me, continually punched me," said Afrii, mother of three. "He had his hand in my mouth trying to pull my lip over my face."
BROOKLYN, NY・2 DAYS AGO
News 12

Authorities are asking for the public’s help identifying the driver of a hit-and-run crash that left a 49-year-old woman critically injured in Secaucus.
SECAUCUS, NJ・2 DAYS AGO
News 12

Many customers from the past and present stopped by Dom’s Bakery on 506 Grand Street to say goodbye.
HOBOKEN, NJ・23 HOURS AGO