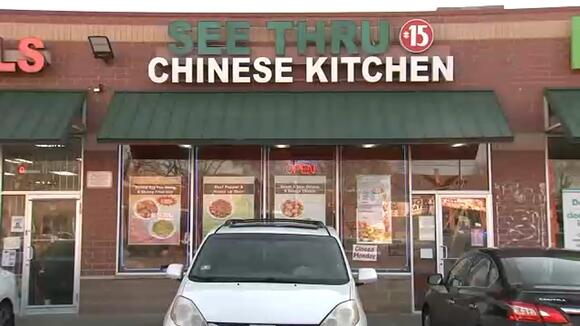 Two people are hurt after a shooting inside a South Side take-out Chinese food restaurant Saturday. Shots rang out just before 12:30 p.m. inside the restaurant located in a strip mall in the 600-block of E. 79th Street, according to police. Witnesses told investigators it happened at See Thru Chinese Kitchen in the city's Chatham neighborhood. Police said an 18-year old man and a 24-year old woman were inside the restaurant when an unidentified gunman walked into the eatery and began firing, striking both victims. At least one of the bullet passed through a wall the restaurant shares with a nail salon, where customers and workers had to hit the deck to avoid getting hurt. "The first time I hear like three time gunshot," said Christine Tin, who works in the strip mall. "At first, I though it must be a robbery, then after I hear like seven times more straight." The 18-year old man was brought to the University of Chicago Hospital with a gunshot wound to the lower back and is now listed in good condition. The 24-year old woman was also struck in the back and was able to drive herself to a nearby hospital. She's listed in fair condition. So far, the Area 2 police detectives' investigation into the attack is just getting underway and so far, no one is in custody and no arrests have been made.

I am so glad I moved out of there when the unrest started. Do miss chi town but it’s not the same

Chicago police: 2 in custody after 7-Eleven robbery spree in East Side, Mt. Greenwood

Robbery in Arlington Heights: Thousands of dollars in jewelry stolen in suburban smash-and-grab

Arlington Heights police said a female suspect walked up to the front door of the store, rang the doorbell, and, when an employee opened the door, two male suspects rushed in behind her.
ARLINGTON HEIGHTS, IL・11 HOURS AGO
ABC 7 Chicago

A man has been charged after a teen trying to buy sneakers was killed in a shooting Sunday, Chicago police said.
CHICAGO, IL・1 DAY AGO
ABC 7 Chicago

Chicago police are investigating after someone fired shots at officers on the Northwest Side, with the suspects' car matching the description from an earlier incident.
CHICAGO, IL・2 DAYS AGO
ABC 7 Chicago

One woman died and nine others were hurt in the incident, including a firefighter.
CHICAGO, IL・1 DAY AGO
ABC 7 Chicago

Indiana State Police said a domestic incident triggered a barricade situation and SWAT response before the shooting.
GARY, IN・1 DAY AGO
ABC 7 Chicago

An elderly woman died after being struck in a hit-and-run crossing the street in Austin Thursday afternoon.
CHICAGO, IL・1 DAY AGO
ABC 7 Chicago

Authorities are searching for two bank robbers who got away with $100,000.
CHICAGO, IL・3 DAYS AGO
ABC 7 Chicago

One person has died after an extra-alarm fire broke out in a Kenwood high-rise Wednesday morning.
CHICAGO, IL・2 DAYS AGO
ABC 7 Chicago

A burnt-out shell is all the remains of Georgis Catering, which has been in business in Chicago since 1946.
CHICAGO, IL・6 HOURS AGO
ABC 7 Chicago

Chicago shooting: Father of 2 gunned down in Belmont Cragin while letting dog out

"Ramiro was a funny dad. He was a loving dad. He was a present dad... He was just a regular person trying to live and trying to make it in the city of Chicago."
CHICAGO, IL・3 DAYS AGO
ABC 7 Chicago

As of this month, the Englewood store's lease is held by Yellow Banana, a company which operates several other stores in the Chicago area.
CHICAGO, IL・9 HOURS AGO
ABC 7 Chicago

5 hospitalized after apparent carbon monoxide poisoning on NW Side: CFD

CFD said a man went to work with symptoms of carbon monoxide poisoning, and, when his boss took him home, other members of the man's family were found unresponsive.
CHICAGO, IL・2 DAYS AGO
ABC 7 Chicago

Gary officials said a police officer was involved in a shooting Tuesday evening.
GARY, IN・3 DAYS AGO