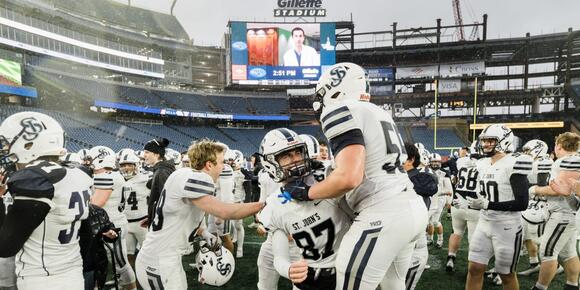 That was the strategy Saturday when St. John’s Prep slowly and methodically strangled Springfield Central, 13-0, to win its third Division 1 Super Bowl title under coach Brian St. Pierre, and sixth in program history.

The Eagles didn’t let Nebraska-commit William Watson, who terrorized opponents all fall, do anything. They held him to six completions in 19 attempts for 49 yards, and shut him out in the first half.

If the Golden Eagles were looking for some balance on the ground, forget about it. Running backs not named Watson gained 67 yards (Watson managed to scramble for 51).

“Holding that team to a goose egg … I don’t see how you can do much better than that,” said St. Pierre. “This is by far the best Super Bowl win of the three I’ve had here. That team is very, very good.”

Springfield coach William Watson Sr. had nothing but praise for St. John’s, and wouldn’t use Saturday’s rainy and windy weather as an excuse for slowing down his high-powered passing attack.

“You start complaining about the elements and that’s an excuse,” he said, “and it detracts from the great job St. John’s did. They made the plays that we didn’t make.”

The entire game was a struggle to find consistency and rhythm on offense. But The Prep cobbled together one good drive in the first half, and quarterback Aiden Driscoll — one of three who took snaps Saturday — found Lynn’s Jonnel Aguero with a 13-yard bubble screen pass for the touchdown that put St. John’s ahead to stay, 7-0, with 5:34 to go in the half.

“That was huge,” said Aguero, who caught three passes for 30 yards. “That was our first score and it put us ahead.”

Aguero, a Georgia commit, left IMG Academy in Florida to play his senior year with the Eagles.

Also, Lynn’s Jesse Ofurie caught two passes for 30 yards and was active in the defensive backfield all day.

“It feels great,” said Ofurie, who will attend Rutgers next year. “People didn’t give us much of a chance, but the guys in this locker room believed.”

A third Lynner, Marquese Avery, a junior linebacker who transferred in from Classical, played a role, recovering a fumble and nearly picking off a pass.

“I’m ecstatic,” Avery said. “I feel that sense of accomplishment. And now I have a ring.”

But it was Carson Browne, who ran for 131 yards on 38 carries, who gave St. John’s Prep the chance to employ its strategy to slow the game down and keep the ball out of Watson’s hands.

“Once we got up, and especially in this weather, we wanted to choke the game. Like a boa constrictor. Choke the clock. That’s what we had to do to win.”

Browne was rewarded for his hard running when he eked his way over from two yards out in the third quarter to extend St. John’s lead to 13-0.

After that, Williams switched strategy and put the ball directly in his son’s hands and he, by himself, moved the ball. But the Eagles weren’t about to let Springfield back in the game, and stopped the Golden Eagles twice in the fourth quarter on fourth-down plays.

After the second stuff, St. John’s, led mostly by Browne’s running, killed off seven minutes of time to keep Springfield off the field.

The post Make it six for St. John’s Prep appeared first on Itemlive .